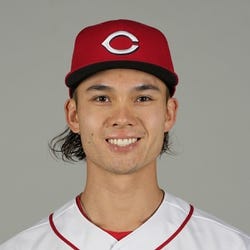 2022 Stats
AVG
.247
HR
5
RBI
6
R
14
SB
0
2023 Projections
AVG
HR
RBI
R
SB
Unlock Our Projections
2023 Fantasy Outlook
Fairchild is back with the team that drafted him in the second round in 2017. His prospect stock took a tumble as Cincinnati traded him to Arizona, and the Diamondbacks cut bait before ill-fated stints with the Mariners and Giants. The Reds brought Fairchild in on a waiver claim in June but didn't give him much playing time until the final month of the season. At 26 years old, Fairchild enjoyed his first real taste of big-league success, slashing .302/.393/.472 in his final 61 plate appearances of 2022. It's probably not enough to land him a starting job entering 2023, though he's firmly in the mix for a bench spot and Nick Senzel is just one of several health question marks for the club. Fairchild's production last season was propped up by his home park, but he's always displayed strong on-base skills and there is still speed here even if he hasn't shown it in the majors. Read Past Outlooks
read more
League Majors
Bats R
Throws R
40 Man Yes
Height 6'0"
Weight 200
DOB 3/17/1996
Born Seattle, WA
College Wake Forest
Drafted 2nd Rd 2017 CIN
$Traded to the Mariners in April of 2022. Traded to the Giants in May of 2022. Waived by the Giants in June of 2022. Claimed off waivers by the Reds in June of 2022.

* Exit Velocity and Barrels/PA % are benchmarked against 2019 data (min 400 PA) and Hard Hit Rate is benchmarked against last season's data (min 400 PA). See here for more exit velocity/barrels stats plus an explanation of current limitations with that data set.
BB/K
0.24
BB Rate
7.3%
K Rate
30.9%
BABIP
.328
ISO
.216
AVG
.247
OBP
.336
SLG
.464
OPS
.800
wOBA
.353
Exit Velocity
88.9 mph
Hard Hit Rate
34.9%
Barrels/PA
5.5%
Expected BA
.221
Expected SLG
.396
Sprint Speed
26.2 ft/sec
Ground Ball %
42.6%
Line Drive %
18.0%
Fly Ball %
39.3%
Prospect Rankings History
View Complete Stuart Fairchild Prospect Ranking History
Advanced Batting Stats
Loading Advanced Batting Stats...
Additional Stats
Games By Position
Defensive Stats
Loading Games Played by Position...
Loading MLB Defensive Stats...
Batted Ball Stats
Loading Batted Ball Stats...
Stats Vs Upcoming Pitchers
Want more matchup stats?
View Stuart Fairchild vs. Pitcher Stats
Loading Matchup Stats...
Reds Depth Chart
Our full team depth charts are reserved for RotoWire subscribers.
Subscribe Now
Recent RotoWire Articles Featuring Stuart Fairchild See More
DraftKings MLB: Monday Breakdown
125 days ago
125 days ago
Dan Marcus is turning to a Braves bat stack Monday against the lowly Nationals.
NL FAAB Factor: Waiver Pickups of the Week
154 days ago
154 days ago
Jan Levine packs this week's edition with a number of pitchers who may be set to receive more opportunities.
NL FAAB Factor: Waiver Pickups of the Week
245 days ago
245 days ago
Atlanta's top hitting prospect is with the club and Jan Levine sees him playing enough where he should be added ASAP.
Fantasy Baseball Injury Report: Haniger Likely Out Six Weeks
271 days ago
271 days ago
Jeff Stotts explains Mariner Mitch Haniger's Grade 2 high ankle sprain, which will keep him sidelined for at least six weeks.
MLB: Hitting Prospect Tiers 2.0
352 days ago
352 days ago
James Anderson releases version 2.0 of his rookie hitter tiers for 2022, in which Rays outfielder Josh Lowe looks like a nice value at ADP.
Past Fantasy Outlooks
2021
2020
Fairchild, the 38th overall pick by the Reds in the 2017 first-year player draft, has displayed strong on-base skills during his time in the minor leagues. At age 23, Fairchild drew 44 walks in 460 PA between High-A and Double-A, leading to a .353 combined OBP in 2019. Those skills along with decent speed, average-to-plus defense in center field and a plus arm point to a future in the major leagues. However, the fact the Reds traded Fairchild last summer along with Josh VanMeter in exchange for a month of Archie Bradley's services tells you all you really need to know. He does not profile as a long-term, big-league regular. Fairchild was added to the Diamondbacks' 40-man roster in November and figures to debut at some point in 2021.
Fairchild hit .360 during his final season at Wake Forest but faced questions about his hit tool entering the 2017 first-year player draft. The Reds grabbed Fairchild in the second round, and while he did little to alleviate concerns about his hitting in his first year with a full-season affiliate, he did finally answer some questions in 2019. Fairchild trimmed his strikeout rate with High-A Daytona from 26% to 21.4%, and that number fell all the way to 12.4% after his move up to Double-A Chattanooga in June (179 plate appearances). He also lifted his walk rate and cracked double-digit homers for the first time as a pro. It seems Fairchild can handle himself just fine with a wood bat, though whether he will hit enough to be a major-league starter in left field remains in question. As a righty, his power should play up in Great American Ball Park. He will likely split 2020 between Double-A and Triple-A.
More Fantasy News