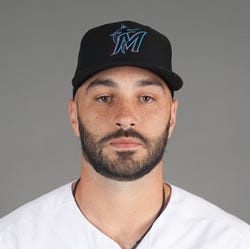 * Exit Velocity, Barrels/BBE %, Balls Hit 95+ MPH %, and Spin Rate are benchmarked against 2019 data (min 30 IP). See here for more exit velocity/barrels stats plus an explanation of current limitations with that data set.
K/BB
1.96
K/9
12.9
BB/9
6.6
HR/9
0.7
Fastball
96.9 mph
ERA
4.31
WHIP
1.61
BABIP
.366
GB/FB
2.19
Left On Base
71.3%
Exit Velocity
78.9 mph
Barrels/BBE
2.5%
Spin Rate
2673 rpm
Balls Hit 95+ MPH
20.0%
Swinging Strike
15.7%
Prospect Rankings History
View Complete Tanner Scott Prospect Ranking History
Advanced Pitching Stats
Loading Advanced Pitching Stats...
Defensive Stats
Loading MLB Defensive Stats...
Stats Vs Today's Lineup
Want more matchup stats?
View Tanner Scott vs. Batter Stats
Loading Matchup Stats...
Marlins Depth Chart
Our full team depth charts are reserved for RotoWire subscribers.
Subscribe Now
Recent RotoWire Articles Featuring Tanner Scott
Collette Calls: Pitching Bold Predictions Reviews
38 days ago
38 days ago
Jason Collette analyzes what he got right and what he got wrong with his preseason pitching predictions, including an outstanding season from Dylan Cease.
Closer Encounters: 2022 Saves in Review, Part 2
42 days ago
42 days ago
Ryan Rufe recaps the saves landscape in this year's NFBC Main Event and shares his own hits and misses from this past season.
Closer Encounters: 2022 Saves in Review, Part 1
48 days ago
48 days ago
Ryan Rufe recaps this past season's saves landscape. Just how many teams preferred closer committees over the conventional approach?
NL FAAB Factor: Waiver Pickups of the Week
72 days ago
72 days ago
The regular season is winding down and Jan Levine is here with a few players who could provide a late fantasy boost.
MLB FAAB Factor: Waiver Pickups of the Week
75 days ago
75 days ago
Jason Shebilske's weekly set of waiver recommendations includes Drew Smyly, who's been consistently strong since the start of August.
Past Fantasy Outlooks
2021
2019
Scott had lackluster results in each of his first three years in the majors, but he was much more effective in 2020, posting a 1.31 ERA and 1.06 WHIP over 25 relief appearances. His 3.97 xFIP was more on par with his mark from 2019, but the southpaw still has a solid 96.5 mph average fastball velocity, and he posted a 26.7 K% in 2020. Much of his success last year stemmed from his ability to limit meaningful contact. After allowing a 43.8% hard-hit rate in 2019, that mark fell to 22.0% last year, along with a 4.0% barrel rate. Despite his success, Scott has struggled with command, recording a walk rate above 11.6% in each of his first four seasons in the majors. His improvement in limiting meaningful contact makes him a strong contender to earn save chances for Baltimore, but the Orioles tend to use a closer-by-committee approach and only recorded 11 saves as a team during the 60-game season in 2020.
Scott made 53 appearances out of the bullpen for the struggling Orioles last season, finishing with an unimpressive 5.40 ERA. His underlying numbers suggest that there's a decent reliever there, however. The young lefty's strong 31.7% strikeout rate mostly offset a fairly poor 11.7% walk rate, leading to a 3.40 FIP. The high-strikeout, high-walk profile is in line with Scott's minor-league numbers as well as his prospect reports. With a fastball that averaged 97.4 mph and a slider that sat at 89.0 mph, the whiffs are certainly no surprise. Like many young relievers, he shows high-leverage potential if he can just get the walks under control, though command and control can take years to develop for pitchers with such electric stuff, if it ever develops at all. Scott is a name worth knowing should the closer job in Baltimore become up for grabs.
More Fantasy News