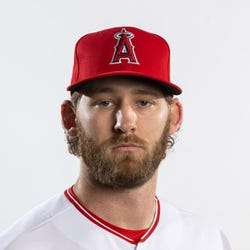 2022 Stats
AVG
.281
HR
23
RBI
65
R
73
SB
5
2023 Projections
AVG
HR
RBI
R
SB
Unlock Our Projections
2023 Fantasy Outlook
A sore groin delayed Ward's debut a week. Once he was ready, Ward was one of the league's top batters with a .333/.443/.644 line in 38 games through June 3. He then visited the IL for 10 days after aggravating a hamstring injury. Upon returning, Ward couldn't find a groove, posting a .222/.297/.339 line over the next 63 games. He then missed a series in Toronto, but when he rejoined the club, Ward found his stroke and finished .339/.387/.548 over his final 34 contests. For the season, Ward's 137 wRC+ should assure a starting job, though the Angels outfield is getting crowded. His plate skills are strong, and Ward's 69th percentile average exit velocity, 66th percentile hard hit rate and 79th percentile all portend an MLB regular. A converted infielder, Ward's outfield defense is improving. Durability is an issue, but when healthy, Ward has the makings of a solid mixed league outfielder at a fair price. Read Past Outlooks
read more
RANKSFrom Preseason
#

* Exit Velocity and Barrels/PA % are benchmarked against 2019 data (min 400 PA) and Hard Hit Rate is benchmarked against last season's data (min 400 PA). See here for more exit velocity/barrels stats plus an explanation of current limitations with that data set.
BB/K
0.50
BB Rate
10.6%
K Rate
21.3%
BABIP
.325
ISO
.192
AVG
.281
OBP
.360
SLG
.473
OPS
.833
wOBA
.365
Exit Velocity
90.0 mph
Hard Hit Rate
35.8%
Barrels/PA
8.3%
Expected BA
.268
Expected SLG
.474
Sprint Speed
23.1 ft/sec
Ground Ball %
35.0%
Line Drive %
21.8%
Fly Ball %
43.2%
Prospect Rankings History
View Complete Taylor Ward Prospect Ranking History
Advanced Batting Stats
Loading Advanced Batting Stats...
Additional Stats
Games By Position
Defensive Stats
Loading Games Played by Position...
Loading MLB Defensive Stats...
Batted Ball Stats
Loading Batted Ball Stats...
Stats Vs Upcoming Pitchers
Want more matchup stats?
View Taylor Ward vs. Pitcher Stats
Loading Matchup Stats...
Angels Depth Chart
Our full team depth charts are reserved for RotoWire subscribers.
Subscribe Now
Recent RotoWire Articles Featuring Taylor Ward
2023 Fantasy Baseball Rankings - Way Too Early Top 300 Draft Ranks
47 days ago
47 days ago
James Anderson provides a way too early top 300 rankings for those who have the itch to start drafting for 2023.
FanDuel MLB: Wednesday Targets
62 days ago
62 days ago
Chris Morgan looks over Wednesday's slate and notes that Shohei Ohtani adds some star power on the mound to the final day of the regular season.
DraftKings MLB: Tuesday Breakdown
63 days ago
63 days ago
Dan Marcus focuses on the last Tuesday slate of the regular season, making his recommendations to help lead you to DFS success.
DraftKings MLB: Monday Breakdown
64 days ago
64 days ago
Dan Marcus brings us his picks for the final Monday slate of the regular season.
FanDuel MLB: Monday Targets
64 days ago
64 days ago
Randy Arozarena has 20 home runs and 32 stolen bases in 2022, and is hitting against Rich Hill, who has a 5.19 ERA at home.
Past Fantasy Outlooks
2022
2021
2020
2019
2016
Ward played in a career-high 65 games last season and was a quality fill-in for the Halos with a 111 wRC+ in 237 plate appearances. The 28-year-old should serve as the team's fourth outfielder in 2022, and he could have an expanded role after Justin Upton was designated for assignment late in spring training. The Angels are set to open with Mike Trout, Brandon Marsh and Jo Adell as its starting outfield trio, with the latter two not yet cementing themselves in the majors. Ward could see more action if the two young outfielders struggle, but it make take an injury for him to see enough playing time to warrant serious fantasy consideration.
After hitting .147/.216/.206 in his first 37 plate appearances of the 2020 campaign, Ward was sent down to the alternate site. He rebounded following a 17-day demotion to hit .350/.400/.483 across his final 65 plate appearances. While his surface stats are unreliable due to sample size, Ward has shown the ability to make loud contact across 297 major-league plate appearances -- 52.6% and 47% hard hit rates in his past two seasons, respectively. Ward has also posted a sprint speed in the 77th percentile or higher in every campaign since 2018, sneakily swiping 25 bases on 32 attempts combined between the majors and minors in that span. If Ward shows the ability to make consistent contact, he could wrangle regular playing time and would be a sneaky power/speed threat. At the very least, he should get plenty of at-bats against left-handed pitchers.
Ward followed a breakthrough 2018 minor-league season with another stellar campaign last year, slashing .306/.427/.584 with 27 home runs and 11 stolen bases for Triple-A Salt Lake. His hot bat resulted in five separate callups to the big club, but shoddy defense and poor offense kept each stint prior to September roster expansion brief. Ward was eventually moved to left field and finally appeared comfortable defensively, but his offense never came around at the major-league level. His primary issue was simply making contact as he registered a putrid 47.9 K% in 48 big-league plate appearances. Ward hit the ball hard when he did manage to put bat to ball and has always been adept at drawing walks, but neither stat matters if his strikeout issues persist. This could be a make-or-break year for Ward as he has little left to prove at the minor-league level.
They say it takes catchers longer to materialize at the plate, so perhaps the change to third base is what helped Ward take off at the plate last year. Playing in both the Southern and Pacific Coast League last season, Ward hit .349/.446/.531 with 14 homers and 18 steals before his late promotion to the big-league level. Major-league pitching was more of a struggle for him. You should be fully prepared for him to have another tour around the PCL unless the Angels move Zack Cozart to second base and give the job to Ward. The fact they traded for Tommy La Stella in the offseason points to them looking at a platoon situation at second base and giving Ward more time to work on his transition from catcher to third and continue to work on his swing as last year's numbers do not match up well to the consensus grades scouts have given him.
The Angels surprised many when they selected Ward with the 26th overall pick in the 2015 draft, but the early returns on the catcher out of Fresno State have been excellent. Ward slashed .348/.457/.438 with three home runs and six steals (on nine attempts) in 56 games across rookie ball and Low-A. This came as a very pleasant surprise, as Ward was touted for his plus arm behind the plate and the bat was supposed to lag behind the rest of the profile. Entering his age-22 season, Ward could actually move relatively fast for a catcher, as he has not yet shown any weaknesses. He will probably start the year back at Low-A, but could quickly receive a promotion to High-A if he continues to show an advanced approach at the plate.
More Fantasy News