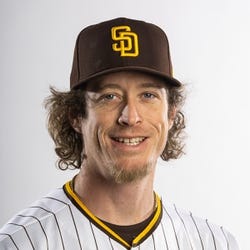 * Exit Velocity, Barrels/BBE %, Balls Hit 95+ MPH %, and Spin Rate are benchmarked against 2019 data (min 30 IP). See here for more exit velocity/barrels stats plus an explanation of current limitations with that data set.
K/BB
1.79
K/9
4.7
BB/9
2.6
HR/9
0.2
Fastball
90.2 mph
ERA
3.56
WHIP
1.23
BABIP
.285
GB/FB
2.97
Left On Base
67.7%
Exit Velocity
83.0 mph
Barrels/BBE
0.9%
Spin Rate
2097 rpm
Balls Hit 95+ MPH
20.3%
Swinging Strike
6.9%
Advanced Pitching Stats
Loading Advanced Pitching Stats...
Defensive Stats
Loading MLB Defensive Stats...
Stats Vs Today's Lineup
Want more matchup stats?
View Tim Hill vs. Batter Stats
Loading Matchup Stats...
Padres Depth Chart
Our full team depth charts are reserved for RotoWire subscribers.
Subscribe Now
Recent RotoWire Articles Featuring Tim Hill See More
The Z Files: NFBC Holdem Rankings and Strategies
115 days ago
115 days ago
Todd Zola shares his gameplan and his rankings for NFBC Postseason Holdem contests.
MLB: Postseason Cheat Sheet and Strategy
119 days ago
119 days ago
Todd Zola tackles the MLB Postseason Cheat Sheet for RotoWire and discusses his approach to postseason leagues this year.
The Z Files: My Top 250 Rest-of-Season Pitchers
August 16, 2021
August 16, 2021
Todd Zola offers his projected pitcher rankings for the stretch run as two National League teams split the top four spots between them.
Past Fantasy Outlooks
2022
2021
2020
2019
Hill spent his first full season in San Diego in 2021 and led the team with a career-high 17 holds. A 3.62 ERA and 1.24 WHIP suggest that the team's trust in him in high-leverage situations was earned. However, a deeper dive raises significant levels of concern that his performance could take a significant dip - or at least make it unlikely he figures into the saves picture -- in 2022. For example, he posted a career-low 12.9 K-BB% while his HR/9 vaulted to 1.4 despite an impressive 61 GB%. Hill particularly struggled against right-handed hitters in 2021, as he allowed 2.0 HR/9 when he lacked the handedness advantage. Far more effective against lefties, Hill appears likely to shift back to a middle-relief role in 2022, particularly given the Padres aggressive approach in retaining and adding to the talent in their bullpen early this offseason.
Traded from the Royals to the Padres shortly before the start of the delayed 2020 season, Hill made 23 appearances, totaling 18 innings in his first season in San Diego. Major League Baseball implemented the three-batter minimum, but even so Hill ended up facing a greater percentage of lefties than he did in 2018-19 (45 of 79 batters faced). With his funky delivery and heavy-sinker approach, Hill keeps the ball on the ground and in fact has only allowed two home runs to left-handed hitters in his career. Righties have had far less trouble with him, managing a 1.44 HR/9 against Hill. He's a throwback finesse specialist, throwing around 90-91 mph with a modest career 23.1 K%. Manager Jayce Tingler will call on Hill when he needs a groundball in a left-on-left matchup in the mid-to-late innings. Perhaps Hill will vulture a save or two along the way.
Hill is a funky-delivery lefty reliever who has been used in two roles -- to get lefties out in tight situations, or to soak up work in the bullpen in blowouts. Hill's delivery has held lefties to a .211/.276/.248 slash line in his time with the Royals, while righties have hit him at a .259/.332/.434 clip. The new rules in 2020 mandating pitchers face at least three hitters increase the importance of Hill doing better against righties, or he could find himself marginalized to the minor leagues. He has minimal appeal in his current capacity in standard-scoring fantasy leagues. If Hill is moved to a contender, as has been rumored this winter, he could generate some interest in leagues that count holds though even then his middling K-rate (career 22.6%) would render him a last-resort option.
There's a myriad of reasons why a player's MLB debut doesn't occur until he's 28 years old. In Hill's case, he was diagnosed with Stage 3 colon cancer in 2015. After a combination of surgery and chemotherapy, Hill became a cancer survivor and reembarked on his career. Perseverance paid off as Hill broke camp with the Royals, making his debut on Opening Day. Hill went on to appear in 70 games, throwing 45.2 innings, mostly as a situational lefty. Hill was used more in high-leverage spots after the break, recording eight of his 13 holds and registering a 2.50 ERA and 1.00 WHIP with 15 punchouts in 18 second-half frames. His success down the stretch likely earned Hill more higher-leverage opportunities out of the gate this season. However, his low innings along with a pedestrian strikeout rate deprive him of fantasy value, except in leagues scoring holds, and even then there are likely better options.
More Fantasy News