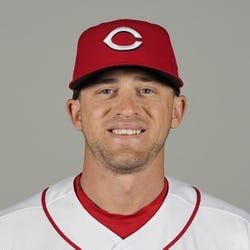 2022 Stats
AVG
.240
HR
8
RBI
25
R
33
SB
7
2023 Projections
AVG
HR
RBI
R
SB
Unlock Our Projections
2023 Fantasy Outlook
Friedl has the chance to be one of those overlooked players who falls into more playing time than their skillset otherwise deserves because he is on a bad ball club bereft of talent to overtake him at the position. Friedl is a high contact hitter with speed and little power who could benefit from reduced shifting and use his willingness to accept walks and convert them into steals on the bases under the new rules. Friedl's home to first time, a good indicator of potential steals, is near the 90th percentile league-wide, so he has the skills to at least duplicate the 17 steals he had in 2022 between Triple-A and the majors in 21 attempts. He is also projected to hit leadoff as things currently stand on the roster making him an excellent candidate to potentially triple his MLB steals total from 2022 on volume alone if he can improve his ability to get on base. Simply put, he is an intriguing late game speed dart throw in all league formats. Read Past Outlooks
read more
RANKS
#408
ADP
League Majors
Bats L
Throws L
40 Man Yes
Height 5'10"
Weight 180
DOB 8/14/1995
Born Sewickley, PA
College Nevada
Drafted 2016 CIN
$Signed a $732,500 contract with the Reds in August of 2016.

* Exit Velocity and Barrels/PA % are benchmarked against 2019 data (min 400 PA) and Hard Hit Rate is benchmarked against last season's data (min 400 PA). See here for more exit velocity/barrels stats plus an explanation of current limitations with that data set.
BB/K
0.50
BB Rate
7.8%
K Rate
15.5%
BABIP
.251
ISO
.196
AVG
.240
OBP
.314
SLG
.436
OPS
.750
wOBA
.326
Exit Velocity
87.2 mph
Hard Hit Rate
29.3%
Barrels/PA
3.5%
Expected BA
.215
Expected SLG
.335
Sprint Speed
24.5 ft/sec
Ground Ball %
32.2%
Line Drive %
17.8%
Fly Ball %
50.0%
Prospect Rankings History
View Complete TJ Friedl Prospect Ranking History
Advanced Batting Stats
Loading Advanced Batting Stats...
Additional Stats
Games By Position
Defensive Stats
Loading Games Played by Position...
Loading MLB Defensive Stats...
Batted Ball Stats
Loading Batted Ball Stats...
Stats Vs Upcoming Pitchers
Want more matchup stats?
View TJ Friedl vs. Pitcher Stats
Loading Matchup Stats...
Reds Depth Chart
Our full team depth charts are reserved for RotoWire subscribers.
Subscribe Now
Recent RotoWire Articles Featuring TJ Friedl See More
Collette Calls: Buckle Up
118 days ago
118 days ago
Jason Collette is excited for the increase in steals which the new rules should bring next season. Which hitters and pitchers will be affected the most?
Yahoo DFS Baseball: Monday Picks
143 days ago
143 days ago
Mike Barner’s Monday Yahoo picks include Jays starter Jose Berrios against visiting Tampa.
Todd's Takes: Popping Out and Popping Off
145 days ago
145 days ago
Todd Zola discusses foul territory and the new MLB rules before picking out the most fantasy-relevant bits of info from Friday's MLB slate.
DraftKings MLB: Wednesday Breakdown
148 days ago
148 days ago
Dan Marcus checks in with his DraftKings recommendations for Wednesday, making his picks to help you craft a winning DFS entry.
NL FAAB Factor: Waiver Pickups of the Week
151 days ago
151 days ago
Jan Levine has profiled a couple of Atlanta starters who could provide fantasy worth down the stretch.
Past Fantasy Outlooks
2022
2017
Friedl made his big-league debut last year, hitting .290 with one home run and more walks (four) than strikeouts (two) in 36 PA. He will once again be in line for some work in the majors, particularly if the Reds don't add to the roster after the lockout. Known as a light-hitting outfielder with good contact skill and plus speed, Friedl is capable of playing center field or left field, and he fits best as a fourth or fifth outfielder. His .264/.357/.422 slash line and 111 wRC+ at Triple-A was not overly impressive for a player who is set to turn 27 in August. However, he should at least make enough contact to hold is own at the bottom third of the lineup against right-handed pitching. He makes for a fine depth piece in NL-only and deep draft-and-hold formats, given his speed and the fact the Reds will likely have playing time available.
Friedl's story is pretty incredible. A perfect storm of draft status confusion, limitations imposed by draft allotment rules and plain oversight (among other factors), led to Friedl going undrafted in 2016. The Reds did their homework and ended up signing Friedl in August, giving him the largest signing bonus ever for an undrafted player. He began to reward the organization immediately, posting a .423 OBP and 16 extra-base hits from the left side of the plate in a 29-game stint with rookie-level Billings. The 21-year-old also stole seven bases, flashing the plus-plus speed that should keep him in center field. That speed along with advanced plate skills and surprising power for a 5-foot-10, 170 pound frame, is enough to put Friedl among the top 10 in the Reds' system, but those in keeper leagues may want to wait and see how Friedl fares with a full-season affiliate before investing.
More Fantasy News