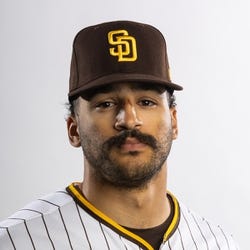 2022 Stats
AVG
.184
HR
17
RBI
53
R
58
SB
7
2023 Projections
AVG
HR
RBI
R
SB
Unlock Our Projections
2023 Fantasy Outlook
Grisham had a 106 wRC+ across his first three big-league campaigns, but he struggled mightily at the plate in 2022 with a .625 OPS in 152 games. He lost hold of the starting job in center field in mid-September but reclaimed the job by the end of the campaign. Grisham once again provided excellent defense in center field with 13 OAA to earn a Gold Glove, which is the primary reason he received as many opportunities as he did despite his offensive issues. His strikeout rate spiked to 28.6 percent, but he continues to take plenty of walks with an 11.2 percent walk rate. Grisham saw his contact rate drop over five percentage points when swinging at pitches inside the strike zone, and his line-drive rate also cratered to 13.5 percent. However, he also clubbed 17 homers and clearly still has the potential to be an impact bat. Whether the 26-year-old is able to get back on track in 2023 remains to be seen, making him a volatile fantasy option at best. Read Past Outlooks
read more
RANKS
#336
ADP
#