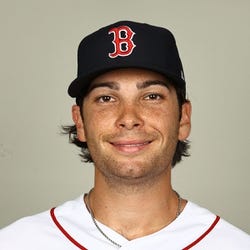 2022 Stats
AVG
.197
HR
5
RBI
12
R
11
SB
1
2023 Projections
AVG
HR
RBI
R
SB
Unlock Our Projections
2023 Fantasy Outlook
Casas, a hulking 6-foot-4, 252-pound first baseman, finally made his MLB debut late last season and projects to be Boston's starter out of camp in 2023, especially with Eric Hosmer cut loose. He has huge raw power to all fields, boasting an elite 40.2 Hard% in the minors and a 110.5 mph max exit velocity in a tiny MLB sample (53 batted balls). A lefty hitter, Casas had a .617 OPS in 2022 and a .591 OPS in 2021 against minor-league southpaws. Considering chief baseball officer Chaim Bloom came from Tampa Bay, it wouldn't be surprising to see Casas on the strong side of a platoon if Boston is intent on winning as many games as possible in 2023. He has consistently logged walk rates over 14 percent and projects to offer more value in OBP leagues than AVG leagues. Casas is not necessarily overweight, but he has a massive frame, so it is mildly concerning that he missed time with the ankle injury and was dealing with a knee injury at the end of the season that lingered into Dominican Winter League play. Read Past Outlooks
read more
RANKS
#237
ADP
#

* Exit Velocity and Barrels/PA % are benchmarked against 2019 data (min 400 PA) and Hard Hit Rate is benchmarked against last season's data (min 400 PA). See here for more exit velocity/barrels stats plus an explanation of current limitations with that data set.
BB/K
0.83
BB Rate
20.0%
K Rate
24.2%
BABIP
.208
ISO
.211
AVG
.197
OBP
.358
SLG
.408
OPS
.766
wOBA
.346
Exit Velocity
86.0 mph
Hard Hit Rate
32.1%
Barrels/PA
4.2%
Expected BA
.193
Expected SLG
.356
Sprint Speed
21.9 ft/sec
Ground Ball %
56.6%
Line Drive %
7.5%
Fly Ball %
35.8%
Prospect Rankings History
Advanced Batting Stats
Loading Advanced Batting Stats...
Additional Stats
Games By Position
Defensive Stats
Loading Games Played by Position...
Loading MLB Defensive Stats...
Batted Ball Stats
Loading Batted Ball Stats...
Stats Vs Upcoming Pitchers
Want more matchup stats?
View Triston Casas vs. Pitcher Stats
Loading Matchup Stats...
Red Sox Depth Chart
Our full team depth charts are reserved for RotoWire subscribers.
Subscribe Now
Recent RotoWire Articles Featuring Triston Casas See More
MLB Best Ball: Evaluating Hitters on Underdog
5 days ago
5 days ago
Dan Marcus tackles the hitting side of Underdog's MLB Best Ball contests, noting the importance of power and of playing time.
MLB Roundtable Rankings: 2023 Fantasy Baseball Top 300
7 days ago
7 days ago
From Trea Turner to Spencer Torkelson, RotoWire's Roundtable Rankings crew offers their combined top 300 fantasy baseball rankings.
Rookie Hitter Tiers 1.0
15 days ago
15 days ago
James Anderson releases Vol. 1 of his rookie hitter tiers for 2023 value only, in which Orioles infielder Gunnar Henderson is in a tier of two at the top.
Collette Calls: Value in the Scrap Heap for 2023
29 days ago
29 days ago
Jason Collette's annual overview of overlooked players includes Eduardo Rodriguez, who shouldn't be forgotten about despite a poor first season in Detroit.
MLB Dynasty Rankings + 10 Rookies for 2023
77 days ago
77 days ago
James Anderson links to his fresh update to the dynasty rankings and profiles 10 rookies he is targeting for 2023, including top prospect Corbin Carroll.
Past Fantasy Outlooks
2022
2021
2020
Casas was quite busy last season, hitting .279/.394/.484 with 14 home runs in 86 games across Double-A and Triple-A before hitting .372 with one home run and six doubles in 21 games in the Arizona Fall League. He also hit .385/.484/.615 while representing Team USA in the Olympics in the middle of the summer. Casas's 70-grade raw power hasn't fully translated in games just yet, with his top current skill being an extraordinary command of the strike zone for a player who will turn 22 in January. He registered a 15.8 BB% and a 19.0 K% across his three non-Olympic stops, and while he wasn't drafted by this current Red Sox regime, he is the exact kind of hitter they value and want to build around. Casas, who measures in at 6-foot-5 and 245 pounds and bats left-handed, will always be more valuable in OBP leagues than in AVG leagues, and it remains to be seen how much of his raw power he will get to at his peak. The hope is that he will eventually be a Matt Olson type of middle-of-the-order run producer. He will head back to Triple-A to start the season before getting a chance to take over the everyday duties at first base for Boston around June or July.
Public reports on Casas' time at Boston's alternate training site have led to him rocketing up prospect lists, even though we don't have tangible data to back up that ascent. He was already trending up after a breakout 2019 season at Low-A, but it sounds like he took another leap this past summer. The lefty hitting first baseman reported to camp in great shape and showed strong plate coverage and an all-fields approach against more advanced pitchers. He is power over hit, but should log high walk rates in the majors, so he is probably going to be more valuable in OBP leagues. The 6-foot-4 slugger is lauded for his makeup and work ethic, and while it is unclear if he will hit .245 or closer to .275, he seems like a safe bet to produce enough to clear the offensive bar of being a big-league first baseman. If there is a minor-league season, Casas could open the year at Double-A with an MLB ETA of early 2022.
First base prospects are a dying breed -- only a handful crack the top-100 fantasy prospect rankings. Casas is one of a select few who have a real chance to be a top-10 fantasy first baseman some day. The No. 26 overall pick in 2018, Casas was seen as a power-over-hit prospect whose swing-and-miss issues could sink him. He quieted those concerns in his full-season debut, logging a 136 wRC+, .218 ISO, 35.7 Hard%, 23.5 K% and 11.8 BB% as one of the youngest players in the Sally League. He is adept at lifting the ball (42.8 GB%) and surprisingly excelled at using the whole field (35.7 Oppo%). Casas hit just .213 with a 33.7 K% against southpaws, so it's possible he will need a platoon partner at the highest level, but he also has several years to work on improving that aspect of his hitting. He should spend most of 2020 at High-A and should reach the majors in late-2021 or early-2022.
More Fantasy News