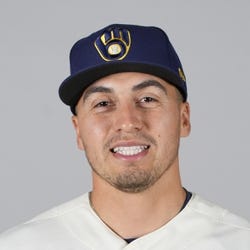 2022 Stats
AVG
.233
HR
17
RBI
51
R
49
SB
3
2023 Projections
AVG
HR
RBI
R
SB
Unlock Our Projections
2023 Fantasy Outlook
Fellow outfielder Lorenzo Cain retired midway through last season, and Taylor wound up starting nearly three times as many games in center field as anyone else on the roster. He was rather streaky at the plate, but he figured out Miller Park for the first time in his career and wound up with a respectable 42 extra-base hits. It's not guaranteed that he remains the Brewers' primary center fielder, but he is sound enough at that position to play both there and in the corner spots, and he is capable enough against both lefties and righties to earn around 400 PA like he did last season. If that turns out to be the case, he could provide enough power to overcome concerns about his OBP. Read Past Outlooks
read more
RANKS
#445
ADP
League Majors
Bats R
Throws R
40 Man Yes
Height 6'0"
Weight 194
DOB 1/22/1994
Born Torrance, CA
College None
Drafted 2nd Rd 2012 MIL
$Signed a contract with the Brewers in June of 2012.

* Exit Velocity and Barrels/PA % are benchmarked against 2019 data (min 400 PA) and Hard Hit Rate is benchmarked against last season's data (min 400 PA). See here for more exit velocity/barrels stats plus an explanation of current limitations with that data set.
BB/K
0.22
BB Rate
5.4%
K Rate
25.2%
BABIP
.272
ISO
.209
AVG
.233
OBP
.286
SLG
.442
OPS
.729
wOBA
.317
Exit Velocity
88.0 mph
Hard Hit Rate
33.9%
Barrels/PA
6.7%
Expected BA
.236
Expected SLG
.412
Sprint Speed
25.3 ft/sec
Ground Ball %
38.1%
Line Drive %
17.9%
Fly Ball %
44.0%
Advanced Batting Stats
Loading Advanced Batting Stats...
Additional Stats
Games By Position
Defensive Stats
Loading Games Played by Position...
Loading MLB Defensive Stats...
Batted Ball Stats
Loading Batted Ball Stats...
Stats Vs Upcoming Pitchers
Want more matchup stats?
View Tyrone Taylor vs. Pitcher Stats
Loading Matchup Stats...
Brewers Depth Chart
Our full team depth charts are reserved for RotoWire subscribers.
Subscribe Now
Recent RotoWire Articles Featuring Tyrone Taylor See More
NFBC Main Event: Season in Review & Lessons Learned
116 days ago
116 days ago
Ryan Rufe looks back on both his successes and his struggles in his first season in the NFBC Main Event.
NFBC Main Event: Fever Dream, Chapter 4
142 days ago
142 days ago
Ryan Rufe goes over the moves he made and the lessons he learned while managing his NFBC Main Event team over the last two months.
DraftKings MLB: Tuesday Breakdown
183 days ago
183 days ago
Dan Marcus previews Tuesday’s deadline-day slate, making his picks to help you craft a winning DraftKings lineup.
NL FAAB Factor: Waiver Pickups of the Week
192 days ago
192 days ago
Jan Levine covers a couple pitchers whose returns have been highly anticipated, including one who hasn't appeared in the majors since 2020.
DraftKings MLB: Saturday Breakdown
193 days ago
193 days ago
Dan Marcus reviews the evening options where a pair of pitching aces are set to start.
Past Fantasy Outlooks
2022
2021
2020
2016
2015
2014
Taylor is finally getting a shot in his late-20s and he didn't disappoint last season. Prorating can be dangerous, but if you double his 12 homers and six steals with a .247 average in 271 plate appearances, he would have ended up with stats similar to Chris Taylor last season (20 HR, 13 SB, .254 AVG). He has a useful profile in fantasy and real life with no obvious weaknesses. The only question surrounding Taylor is how much he will play this season. The playing time situation is a little more open up with Avisail Garcia signing with Miami, Jackie Bradley going back to Boston and the possibility of the DH in the National League. He wasn't playing all the time last season between trips to the minors and spending time as a bench bat. He's someone to closely monitor in spring training to see if he lands a full-time role.
Despite spending time in the majors each of the past two years, Taylor will retain rookie status into 2021 as he has thus far logged only 53 plate appearances. Over that span, the outfielder has slashed .271/.340/.521 with a pair of home runs and six doubles among his 13 hits. Taylor has demonstrated solid contact and strikeout rates throughout his time in the minors but didn't show much power until 2018, when he used a revamped swing to tally 20 homers at Triple-A. He followed that by belting 14 long balls (in over 100 fewer at-bats) the next season, leading to his first big-league callup. Taylor has used his above-average speed to swipe 89 bases in the minors, though his single-season numbers have never been gaudy. He projects to be a solid-but-unspectacular offensive contributor, in the vein of a fourth outfielder. He's likely to open 2021 in that role with Milwaukee otherwise set at the position.
With multiple players ahead of him on the organizational depth chart, Taylor returned to Triple-A to start the 2019 season after posting solid numbers at that level in 2018. The outfielder scuffled out of the gates, hitting .236 with a .720 OPS and 28.7 K% in 44 games before going down with a wrist injury at the end of May. Taylor returned one month later and turned things around, slashing .294/.369/.480 with a 17.6 K% over his final 48 games. While his strong finish to the minor-league season also played a role, injuries to Milwaukee's outfield ultimately paved the way for the 2012 second-round pick to make his major-league debut in September. Taylor saw limited opportunities down the stretch, appearing in 15 games and going 4-for-10 with a pair of doubles. The Brewers' outfield looks set in 2020 with the addition of Avisail Garcia, leaving Taylor to serve as depth.
Taylor emerged as a top prospect in the Brewers' organization a couple years ago, but wasn't able to put up top-prospect numbers in 2015. In his first full season with Double-A Biloxi, the 21-year-old slashed a meager .260/.312/.337, a step back from the .727 OPS he posted in 2014 with High-A Brevard County. He maintained a contact rate of 88 percent, but also saw a decrease in his walk rate and an increase in his strikeout rate. Taylor is still young, so he still has time to develop into an everyday outfielder for the Brewers, especially if he can continue to consistently make contact.
Taylor put together another quality season with the bat in 2014, tallying 45 extra-base hits and striking out just 58 times in 135 games. He also showed improvement as a base runner, and was thrown out just six times in 29 attempts. Taylor went 1-for-13 in a brief appearance with Double-A Huntsville last year but he will likely be the starting center fielder there in 2015. He is one of the top, if not the top, prospect in the Brewers’ system and is well on his way to reaching the big leagues sometime in 2016 or 2017.
While Taylor’s power faded down the stretch last season, he provided a glimpse at his upside by posting a respectable .738 OPS and stealing 19 bases -- while primarily playing center field -- in his age-19 season. Taylor has speed and athleticism, so there is a good chance he could handle center field long term. Taylor’s age may keep him at the Low-A level to start 2014, but a fast start could earn him a ticket to High-A in short order.
More Fantasy News