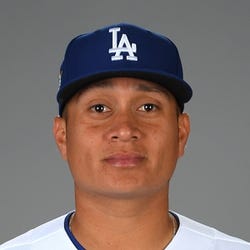 Calculate Stats Over Time
Just click on any two dates.
Loading Minor League Pitching Game Log...
Left/Right Pitching Splits
Since 2020
-34%
BAA vs LHP
2022
No Stats
2021
-32%
BAA vs LHP
2020
-44%
BAA vs LHP
Home/Away Pitching Splits
Since 2020
-22%
ERA on Road
2022
No Stats
2021
-46%
ERA on Road
2020
-100%
ERA at Home
Advanced Pitching Stats
Loading Advanced Pitching Stats...
Defensive Stats
Loading MLB Defensive Stats...
Stats Vs Today's Lineup
Want more matchup stats?
View Victor Gonzalez vs. Batter Stats
Loading Matchup Stats...
Dodgers Depth Chart
Our full team depth charts are reserved for RotoWire subscribers.
Subscribe Now
Recent RotoWire Articles Featuring Victor Gonzalez See More
Closer Encounters: Relief Market Primer
186 days ago
186 days ago
Ryan Rufe breaks down the relievers who could be on the move in the next few days as well as their potential destinations.
Collette Calls: Everyone Gets A Save!
August 11, 2021
August 11, 2021
Jason Collette looks at the league-wide saves situation, as it seems these days that everyone gets a save!
NL FAAB Factor: Waiver Pickups of the Week
May 16, 2021
May 16, 2021
Jan Levine provides his latest contingent of NLers, including a look at Jorge Alfaro's imminent return to the lineup.
Week 6 FAAB Recap
May 3, 2021
May 3, 2021
Shane McClanahan was the big prize free agent in a number of leagues this week.
2021 Fantasy Outlook
Gonzalez wasn't on many radars heading into 2020 despite impressing in a run through three minor-league levels the previous season. The talented rookie failed to make the Dodgers' Opening Day roster but eventually emerged as LA's top lefty reliever, finishing with a 1.33 ERA and 0.74 WHIP. Gonzalez's 1.67 FIP nearly matched his minuscule ERA thanks to peripherals that fly off the charts. He held hitters to a .214 xwOBA and .229 xSLG, both top-10 marks among MLB relievers. Gonzalez also gave up zero barrels all season, registered a minuscule 2.5 BB% and yielded a .063 average against his slider. The Dodgers were not shy about going to him in the postseason, and Gonzalez ended up as the winning pitcher in the decisive game of the World Series. He'll be hard-pressed to match his magical rookie campaign but should fill a high-leverage role with the opportunity to build upon his success.
More Fantasy News