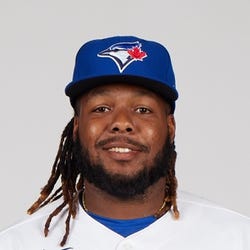 2022 Stats
AVG
.274
HR
32
RBI
97
R
90
SB
8
2023 Projections
AVG
HR
RBI
R
SB
Unlock Our Projections
2023 Fantasy Outlook
It was expected that Guerrero Jr would drop back off his incredible 2021 season due to Toronto playing fulltime at Rogers Centre rather than the cozy environments of Dunedin and Buffalo as well as the changes to Camden Yards for road trip. Factor in the mushball and his homers dropped off to where we reastically should have expected them to be but it was surprising to see both his runs and RBIs fall back below 100 considering the talent in the lineup around him in Toronto. Whereas he hit .315 with 11 homers with runners in scoring position in 2021, those numbers fell to 5 and .267 respectively last year in nearly identical sample sizes. RISP production lacks year over year stickiness, but it was an issue last year as the league did tend to pitch around him leading to more walks (11%) in those situations than others (8%.) The 8 steals were a nice bonus considering he is not the fleetest of foot. We can call him a five-category contributor as a first baseman; he cannot quite pull off a younger Paul Goldschmidt, but who can? Read Past Outlooks
read more
RANKS
#