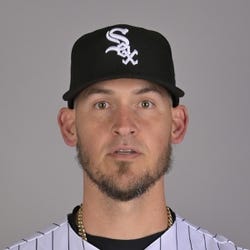 2022 Stats
AVG
.202
HR
5
RBI
27
R
15
SB
1
2023 Projections
AVG
HR
RBI
R
SB
Unlock Our Projections
2023 Fantasy Outlook
Grandal was not expected to repeat 2021's career year but following it up with his worst season ever was a surprise. To be fair, hamstring, back and knee issues hampered him all season with lower back spasm requiring a month-long IL visit. Grandal's exit velocity, Barrel rate, and hard-hit rate all fell precipitously. He maintained solid plate skills but hitting the ball with far less authority torpedoed his batting average and slugging to career lows. Grandal's defense also suffered, which does not bode well for playing time since his bat is no longer worthy of designated hitter or first base action. Grandal isn't over the hill at 34-years-old. However, since 2014, only three backstops have caught more innings and the squatting could be catching up. Even if he starts, Grandal's playing time is earmarked to drop. He's still in play in two-catcher leagues, but he's now lumped in with the back-end dregs. Read Past Outlooks
read more
RANKSFrom Preseason
#