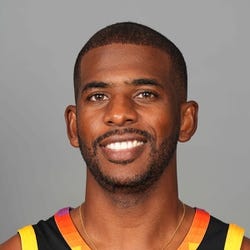 2022 Stats
PTS
13.7
REB
4.3
AST
8.6
STL
1.4
BLK
0.3
ROS Projections
PTS
REB
AST
STL
BLK
Unlock Our Projections
2022 Fantasy Outlook
Although Paul was 36 years old during the 2021-22 regular season, he didn't show many signs of slowing down and reiterated after the season that he has no plans to retire. His 10.8 assists per game marked his highest total since the 2008-09 season and ranked first in the NBA last year, but he averaged a career-low 14.7 points while seeing a slight decrease on the boards with 4.4 rebounds in 32.9 minutes per game. Paul's efficiency from long distance dropped last year, as he shot just 31.7 percent from three-point range -- his lowest rate since his rookie season. He started the first 58 games of the season before missing just under a month due to a thumb injury. Paul's absence likely alleviated some workload concerns down the stretch, and it was encouraging to see the veteran beat his return timetable of 6-to-8 weeks. He may see a few more rest days during his age-37 season, especially considering that he's played at least 65 games each of the last three years. However, Paul proved last season that he can handle 30-plus minutes on a nightly basis. As long as he can hold off Father Time for another year, Paul is an early-round option who should have the opportunity to provide consistent fantasy production again during the 2022-23 season. Read Past Outlooks
read more
Height 6'0"
Weight 175
DOB 5/6/1985
College Wake Forest
Drafted 1st Rd, #4 in 2005
$Signed a four-year, $120 million contract with the Suns in August of 2021.
Personal Bio/PreCareer Summary

Paul was born in 1985 in Winston-Salem, North Carolina. He's the son of Robin and Charles Paul and has an older brother (also named Charles). Growing up, Chris and Charles worked at a gas station owned by their grandfather, Nathanial Jones. Jones was tragically killed during Paul's senior season of high school. Years later, in 2005, the Chris Paul Family Foundation established the CP3 Foundation in honor of his late grandfather to assist the city of Winston-Salem. Paul's foundation annually awards students of Forsyth County in North Carolina a scholarship to attend Wake Forest University. In the summer of 2013, Paul was elected President of the NBA Players Association. He is also an avid bowler and golfer. In 2016, Paul was named ESPN's Sports Humanitarian of the Year. Follow him on Twitter and Instagram (@CP3). Paul played two seasons for Wake Forest University before heading to the NBA. During the 2003-04 season, Paul started in all 31 games as a freshman and was named ACC Rookie of the Year. Additionally, College Insider, The Sporting News, Basketball Times and Dick Vitale all named Paul the National Freshman of the Year. Led by Paul, the Demon Deacons made it to the third round of the NCAA tournament. As a sophomore, Paul was named a First Team Consensus All-American as well as a member of ESPN's Academic All-America Team. He was selected at No. 4 overall of the 2005 NBA Draft by New Orleans. Each year, Paul's charity foundation awards a scholarship to students in Forsyth County, North Carolina to attend Wake Forest.