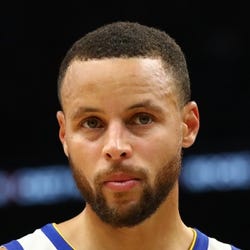 Out
Injury Lower Leg
Est. Return 2/24/2023
2022 Stats
PTS
29.4
REB
6.3
AST
6.4
STL
1.0
BLK
0.4
ROS Projections
PTS
REB
AST
STL
BLK
Unlock Our Projections
2022 Fantasy Outlook
Curry added to his already-Hall-of-Fame resume last season, claiming the 2022 Finals MVP award - his first. That said, Curry's regular season was a bit up and down. He still finished seventh in per-game fantasy production, but December and January were tough months for managers leaning on Curry. In those 27 games, he shot just 39.4 percent from the field. Curry made up for it with a scorching hot February and March (49.8 percent), but the full-season result was still just 43.7 percent shooting from the field - the lowest mark of his career and a significant drop-off from the 48.2 percent mark he hit in 2020-21. The veteran guard also took fewer shots, with Klay Thompson returning to the fold after two years on the sidelines. Decreased efficiency and volume led to Curry's points per game dropping from 32.0 to 25.5, which is what caused him to rank outside of the top five in per-game fantasy production for the first time since 2011-12. It's understandable if fantasy managers have concerns about Curry heading into his age-34 season, especially coming off his worst shooting year from the field and three. However, he demonstrated in the playoffs that he's still one of the league's best players. In the vast majority of fantasy drafts, he'll be selected in the top five, where he's finished most of his career. Read Past Outlooks
read more
Height 6'2"
Weight 185
DOB 3/14/1988
College Davidson
Drafted 1st Rd, #7 in 2009
$Signed a four-year, $215.35 million contract extension with the Warriors in August of 2021.
Personal Bio/PreCareer Summary

Wardell Stephen "Steph" Curry II was born in Akron, Ohio, to Sonya and Dell Curry. His mother was a volleyball player at Virginia Tech and his father played in the NBA for the Jazz, Cavaliers, Hornets, Bucks and Raptors. As children, Stephen and his brother Seth -- who also plays in the NBA -- would often attend games and shoot with the Hornets (where Dell spent most of his career) during warmups. Following his father's retirement, Stephen and his family settled in North Carolina. There, Stephen attended Charlotte Christian School, where he was named all-conference and all-state and led his team to three conference titles and three state playoff appearances. Since 2014, Curry has hosted the SC30 Select Camp, inviting 20 top high school prospects for a four-day, hands-on training session. He and his wife set up the Eat. Learn. Play Foundation, a family-founded charity "committed to unlocking the amazing potential of every child by fighting to end childhood hunger and ensuring children have access to nutritious food, establishing that students have access to a quality education, and the resources to succeed, and providing opportunities and safe places for all children to play and be active." Curry has been a champion of the United Nations Foundation's Nothing But Nets campaign since his college days at Davidson; since 2014, he has donated three insecticide-treated mosquito nets for every three-pointer he makes to help combat malaria. In July of 2013, Curry traveled to Tanzania with a group from Nothing But Nets and helped distribute 38,000 bed nets to families at the Nyarugusu Refugee Camp. He also met President Barack Obama after giving a speech at the White House in support of the President's Malaria initiative in February 2015. Learn more about Curry by following him on Twitter (@StephenCurry30) and Instagram (@stephencurry30). As the son of NBA sharpshooter Dell Curry, Stephen was a known name before he attended Davidson. The 6-foot-3 guard started 33 games as a freshman and was a scoring sensation. He led the team with 21.5 points and hit 40.8 percent of his three-point attempts. The Wildcats made the NCAA Tournament and Curry put a scare into Maryland by scoring 30 points. Curry's sophomore campaign made him a national figure. He led the SoCon in scoring for the second straight season with 25.9 points per contest, and the team did not lose in conference play. Curry brought Davidson back in its first-round game against Gonzaga with 30 second-half points and totaled 40 in the game. He scored 30 and 33 in the two games against Georgetown and Wisconsin before the exciting run ended against Kansas. The guard led the nation in scoring as a junior with 28.6 points and added 5.6 assists and 2.5 steals. He scored 25 points in seven straight games and scored 44 points twice. The Wildcats were defeated by College of Charleston in the SoCon tournament. Curry was named a consensus First Team All-American and declared for the 2009 NBA Draft with one season of eligibility remaining. He was chosen with the seventh overall pick by the Golden State Warriors.