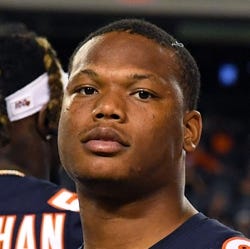 2022 Rush/Rec Stats
ATT
160
YDS
641
TD
4
YDS
244
TD
0
Rest-of-Season Projections
ATT
YDS
TD
YDS
TD
Unlock Our Projections
2022 Fantasy Outlook
After a breakthrough 2020 season, Montgomery came roaring out of the gate in 2021 with three touchdowns and two 100-yard rushing performances in the first four weeks. Unfortunately, a sprained knee cost him the next four weeks, and in his absence Khalil Herbert proved nearly as productive as the Bears' lead back. Montgomery regained his lead role upon his return, but not his mojo, as he ran for only four more touchdowns the rest of the way and didn't have another 100-yard rushing game. The knee injury may have played a factor in that downturn, as Montgomery's broken tackle numbers and yards after contact both regressed significantly from the season before, and he doesn't have the kind of elite athleticism that would allow him to be effective at less than 100 percent. Where he does excel is with his vision and patience, which often leaves him at the mercy of a middling Chicago offensive line. With the Matt Nagy era now over, new offensive coordinator Luke Getsy is expected to bring a Packers-style scheme to another NFC North squad. That might mean Herbert getting more touches, but the bigger concern is Montgomery's shaky team context after the Bears’ six-win 2021 season was followed by an offseason marked by significant losses (WR Allen Robinson, G James Daniels, DE/OLB Khalil Mack) without comparable veteran replacements. Read Past Outlooks
read more
RANKS
#38.18
ADP
#

RBChicago Bears
Read More News
NFL Stats
Loading NFL Stats...
Fantasy/Red Zone Stats
See red zone opportunities inside the 20, 10 and 5-yard lines along with the percentage of time they converted the opportunity into a touchdown.
Loading Fantasy/Red Zone Stats...
Advanced NFL Stats
How do David Montgomery's 2022 advanced stats compare to other running backs?
This section compares his advanced stats with players at the same position. The bar represents the player's percentile rank. For example, if the bar is halfway across, then the player falls into the 50th percentile for that metric and it would be considered average. The longer the bar, the better it is for the player.
Broken Tackle %
19.9%
Positive Run %
87.0%
% Yds After Contact
65.0%
Avg Yds After Contact
2.6
Rushing TD %
2.1%
Touches Per Game
15.2
% Snaps w/Touch
35.5%
Air Yards Per Game
3.5
Air Yards Per Snap
0.08
% Team Air Yards
1.8%
% Team Targets
10.2%
Avg Depth of Target
1.6 Yds
Catch Rate
70.0%
Drop Rate
0.0%
Avg Yds After Catch
10.2
% Targeted On Route
16.5%
Avg Yds Per Route Run
1.34
Loading Advanced NFL Stats...
2022
2021
2020
2019
2022 NFL Game Log

vs Packers
Sunday, Dec 4th at 1:00PM
Overall QB Rating Against
78.4
Cornerbacks
79.4
Safeties
84.2
Linebackers
68.9
Loading Opponent Pass Defense Stats...
2022 David Montgomery Split Stats
Loading NFL Split Stats...
Measurables Review View College Player Page
How do David Montgomery's measurables compare to other running backs?
This section compares his draft workout metrics with players at the same position. The bar represents the player's percentile rank. For example, if the bar is halfway across, then the player falls into the 50th percentile for that metric and it would be considered average.
Height
5' 11"
Weight
224 lbs
40-Yard Dash
4.63 sec
Vertical Jump
28.5 in
Broad Jump
121 in
Bench Press
15 reps
Hand Length
9.25 in
Arm Length
31.38 in
Recent RotoWire Articles Featuring David Montgomery
FanDuel Fantasy Football: NFL Picks Week 13 DFS
3 days ago
3 days ago
Mike White has a shot at another big game against the Vikings, who have given up multiple touchdown passes to opposing quarterbacks in four of the last five games.
NFL DFS Picks: Yahoo Plays and Strategy for Week 13 Sunday Baller
4 days ago
4 days ago
Sasha Yodashkin digs into the Week 13 slate and recommends you don't overlook Nick Chubb against a vulnerable Texans run defense.
NFL Game Previews: Saints-Buccaneers Matchup
4 days ago
4 days ago
Erik Siegrist analyzes the Monday night matchup as Tom Brady and the Bucs take on the Saints in a key NFC South showdown.
Exploiting the Matchups: Week 13 Start/Sit and Streamers
4 days ago
4 days ago
Zay Jones was the star last week, but Jerry Donabedian expects Trevor Lawrence to connect with Christian Kirk again in a catfight that could turn into a shootout.
Weekly Rankings: Week 13 Value Meter
6 days ago
6 days ago
Deshaun Watson makes his Browns debut this week.
Past Fantasy Outlooks
2021
2020
2019
Few players changed the trajectory of their careers for the better in 2020 more than Montgomery. After a lackluster rookie season that left his future as a potential lead runner in doubt, the 23-year-old got a little more support from his offensive line and a little more trust from coach Matt Nagy, ultimately breaking out for more than 1,000 yards rushing and 1,500 yards from scrimmage. Montgomery's best assets might be his patience and vision, traits that do leave him more scheme-dependent than some other RBs, though he also possesses plenty of power and finished fourth among all backs in broken tackles last year. He's even a capable receiver and pass protector, and he more than doubled his production through the air from his debut campaign. The Chicago offense is still a less than ideal environment for any skill player, and replacing Mitchell Trubisky with Andy Dalton and Justin Fields won't necessarily fix the problem right away, but Montgomery has now established himself — alongside WR Allen Robinson — as one of the centerpieces of the team's attack. Even if he loses some targets with Damien WIlliams joining the team and Tarik  Cohen coming back from an ACL tear, Montgomery is a safe bet to dominate Chicago's ground workload again.
Montgomery struggled through a lackluster rookie season, but it's hard to pin the blame solely on him. The Bears offense was a disaster in 2019, as an injury-plagued offensive line and regression from Mitchell Trubisky constantly put the running game in poor situations and forced Montgomery to dance for yards that weren't there. He finished seventh among qualified rushers in broken tackle rate and T-6th in broken tackles (28), so he proved adept at making the first man miss. The problem was the three or four other defenders who were there a split second later, as his average of 1.6 yards after contact was fourth lowest in the league, sandwiching him between Peyton Barber and Sony Michel. Montgomery's early down role in tandem with Tarik Cohen seems secure, while the overall outlook remains cloudy. The addition of Bill Lazor as Chicago's new offensive coordinator seems geared toward improving the passing game, as does the team's decision to trade for Nick Foles to compete with Trubisky under center, and the offensive line could be even worse following the retirement of Kyle Long. Montgomery might have the skills to be an effective NFL back, but his team context remains suboptimal, and a groin injury from training camp has him looking questionable-to-doubtful for Week 1.
A 2019 third-round pick out of Iowa State, Montgomery steps into an immediate competition with free-agent signee Mike Davis for a significant role in the Chicago backfield alongside Tarik Cohen. Montgomery's most impressive traits as a runner are his vision, patience and power, as he calmly lets holes develop before throttling up to get to the second level. He ran just a 4.63 in the 40-yard dash, but he has enough wiggle to make the first tackler miss, and he can generate yards after contact with a stout frame, bringing a low center of gravity and powerful leg drive. He's also competent as a receiver and already adept as a pass protector, giving him the ability to stay on the field for three downs, even if his targets will be limited by Cohen's presence. There are concerns about Montgomery's college workload and the punishment his running style creates, but he's essentially a more versatile version of Jordan Howard, so he likely will have an opportunity to thrive in the same role focused on early downs and short-yardage carries.
More Fantasy News