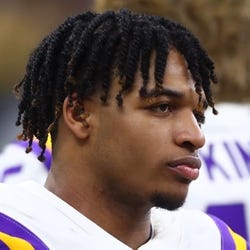 2022 Receiving Stats
REC
87
YDS
1046
TD
9
AVG
12.0
TAR
135
Rest-of-Season Projections
REC
YDS
TD
AVG
TAR
Unlock Our Projections
2022 Fantasy Outlook
Chase enjoyed one of the best rookie seasons in NFL history last year, instantly proving worthy of the No. 5 pick. Reports from training camp about repeated drops became a distant memory before long ... even though he ultimately committed a league-high 11. The Bengals aren't complaining, in light of the damage Chase did on his 81 catches, finishing second in YPT and YPR and third in YAC (651). He used 4.34 speed to beat defenders over the top — catching 15 of 34 deep targets for 576 yards and eight TDs — but he wasn't overly reliant on go routes, also posting efficient stats on shorter throws (he caught 48 of 62 targets within 10 yards of the line of scrimmage, and 18 of 27 in the 10-to-19-yard range). If you're looking for negatives, Chase has serious competition for targets, namely from fellow wideout Tee Higgins, who technically got more looks per game than the rookie last year (7.8 to 7.5). But that also means defenses have two perimeter threats to worry about, making it all the harder to defend a monster like Chase. If anything, the offense might even take another step forward after Joe Burrow's 2021 breakout, with the team adding three O-line starters in free agency (C/G Ted Karras, G Alex Cappa, RT La'el Collins). That doesn't mean Chase will avoid regression on some of his loftier averages (e.g. 11.4 YPT, 8.0 YAC), but it does put him in great position to remain among the league's most efficient wideouts per target, with potential to add volume as well. Read Past Outlooks
read more
RANKS
#8.28
ADP
#

WRCincinnati Bengals
Read More News
NFL Stats
Loading NFL Stats...
Fantasy/Red Zone Stats
See red zone opportunities inside the 20, 10 and 5-yard lines along with the percentage of time they converted the opportunity into a touchdown.
Loading Fantasy/Red Zone Stats...
Advanced NFL Stats
How do Ja'Marr Chase's 2022 advanced stats compare to other wide receivers?
This section compares his advanced stats with players at the same position. The bar represents the player's percentile rank. For example, if the bar is halfway across, then the player falls into the 50th percentile for that metric and it would be considered average. The longer the bar, the better it is for the player.
Air Yards Per Game
103.4
Air Yards Per Snap
1.66
% Team Air Yards
29.9%
% Team Targets
22.6%
Avg Depth of Target
9.3 Yds
Catch Rate
64.4%
Drop Rate
5.2%
Avg Yds After Catch
4.9
% Targeted On Route
24.0%
Avg Yds Per Route Run
1.86
Loading Advanced NFL Stats...
2022
2021
2022 NFL Game Log

@ Chiefs
Sunday, Jan 29th at 6:30PM
Overall QB Rating Against
87.0
Cornerbacks
84.6
Safeties
93.5
Linebackers
82.3
Loading Opponent Pass Defense Stats...
2022 Ja'Marr Chase Split Stats
Loading NFL Split Stats...
Measurables Review View College Player Page
How do Ja'Marr Chase's measurables compare to other wide receivers?
This section compares his draft workout metrics with players at the same position. The bar represents the player's percentile rank. For example, if the bar is halfway across, then the player falls into the 50th percentile for that metric and it would be considered average.
* All metrics are from his Pro Day (not the combine).
Height
6' 1"
Weight
201 lbs
40-Yard Dash
4.34 sec
Shuttle Time
3.99 sec
Cone Drill
6.96 sec
Vertical Jump
41.0 in
Broad Jump
132 in
Hand Length
9.63 in
Arm Length
30.75 in
Recent RotoWire Articles Featuring Ja'Marr Chase See More
NFL Player Prop Picks: 5 Props To Bet Now For The AFC And NFC Championship
Yesterday
Yesterday
Get in the betting action with the five best NFL player prop bets for the AFC and NFC Championship games. Which bets are a lock for championship weekend?
NFL Game Previews: Conference Championship Matchups
Yesterday
Yesterday
Erik Siegrist previews the conference championship games as Joe Burrow and the Bengals take on the Chiefs for the AFC crown and a return trip to the Super Bowl.
NFL DFS Picks: Yahoo Plays and Strategy for NFL $100K Championship Baller
2 days ago
2 days ago
Sasha Yodashkin reviews the weekend championship-game slate and thinks Christian McCaffrey might be the key to the 49ers' chances of advancing to the Super Bowl.
Weekly Rankings: Conference Championships Value Meter
2 days ago
2 days ago
A.J. Brown tops the wide receiver list for this week's Value Meter.
NFL Reactions: Divisional Round Playoffs
6 days ago
6 days ago
Jim Coventry gives his reactions to the Divisional Playoff weekend, including Patrick Mahomes showing outstanding courage while leading the Chiefs to victory.
2021 Fantasy Outlook
Coming off a huge year at LSU — 126-84-1,780-20 — with 21.2 YPC and 14.1 YPT, Chase opted out in 2020, but it didn’t seem to cost him. In fact, he boosted his stock at his pro day with a 4.38 40, 41-inch vertical and 11-foot broad jump. The Bengals drafted him fifth overall, pairing Chase with his former LSU quarterback Joe Burrow. At 6-0, 201, Chase has only average size, but he’s bigger and heavier than most burners, and his athleticism will present a problem for cornerbacks tasked with checking him downfield. Don’t expect a massive target share out of the gate, however, as the 6-4, 215-pound Tee Higgins had a strong rookie year in 2020, and slot-man Tyler Boyd will see his looks. Still, the Bengals have no reliable tight ends, so they could rank top-five in cumulative WR targets for a third straight year under head coach Zac Taylor. Burrow, with whom Chase already has an excellent rapport, is expected to be ready for the start of the year.
More Fantasy News