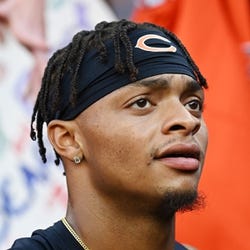 Questionable
Injury Hip
Est. Return 3/1/2023
2022 Pass/Rush Stats
YDS
2242
TD
17
INT
11
YDS
1143
TD
8
Rest-of-Season Projections
YDS
TD
INT
YDS
TD
Unlock Our Projections
2022 Fantasy Outlook
Fields endured a rough rookie year after taking the starting job Week 3 last season. The dual-threat QB was only a threat on the ground (420 yards, two TD), while his on-target percentage (70.0) ranked 29th and his completion percentage (58.9) was 30th. He tried to put his strong arm to use with a 9.8-yard average target depth, second in the league only to Russell Wilson, and his downfield passing was mostly middle of the pack (the four INTs on attempts of 20-plus yards notwithstanding). That's a starting point for new offensive coordinator Luke Getsy, the QBs coach and passing game coordinator in Green Bay the last three years, though the Bears didn't get Fields much else in the way of help this offseason. RB David Montgomery and TE Cole Kmet are useful on short throws, but neither has been a threat downfield, and the wideout group looks thin beyond de facto No. 1 Darnell Mooney. The Bears added only Byron Pringle and Equanimeous St. Brown in free agency to replace Allen Robinson, later drafting 25-year-old speedster Velus Jones in the third round. Fields has a nice foundation of rushing stats to build fantasy value, but his passing still needs to take a major jump, and he won't have a strong group of receivers supporting him. Read Past Outlooks
read more
RANKS
#138.82
ADP
#

QBChicago Bears
Read More News
NFL Stats
Loading NFL Stats...
Fantasy/Red Zone Stats
See red zone opportunities inside the 20, 10 and 5-yard lines along with the percentage of time they converted the opportunity into a touchdown.
Loading Fantasy/Red Zone Stats...
Advanced NFL Stats
How do Justin Fields' 2022 advanced stats compare to other quarterbacks?
This section compares his advanced stats with players at the same position. The bar represents the player's percentile rank. For example, if the bar is halfway across, then the player falls into the 50th percentile for that metric and it would be considered average. The longer the bar, the better it is for the player.
Bad Pass %
21.9%
Avg Target Depth
8.9 Yds
Sack Rate
14.7%
Avg Receiver YAC
5.1 Yds
Receiver Drop %
4.1%
Loading Advanced NFL Stats...
2022
2021
2022 NFL Game Log

Bears
View Full Depth Chart
2022 Justin Fields Split Stats
Loading NFL Split Stats...
Measurables Review View College Player Page
How do Justin Fields' measurables compare to other quarterbacks?
This section compares his draft workout metrics with players at the same position. The bar represents the player's percentile rank. For example, if the bar is halfway across, then the player falls into the 50th percentile for that metric and it would be considered average.
* All metrics are from his Pro Day (not the combine).
Height
6' 3"
Weight
228 lbs
40-Yard Dash
4.46 sec
Hand Length
9.13 in
Arm Length
32.50 in
Recent RotoWire Articles Featuring Justin Fields See More
NFL Player Props to Target for Wild Card Weekend
15 days ago
15 days ago
The NFL Playoffs kick off this weekend and Walter Hand has his best bets and player props lined up for the Wild Card Weekend action.
Chicago Bears vs. Minnesota Vikings Betting Odds, Picks, and Predictions for Week 18
20 days ago
20 days ago
Eric Timm digs into the betting odds and identifies his best bets as the Vikings take on the Bears in Chicago to wrap up the regular season.
Gameday Injuries: Week 18
20 days ago
20 days ago
Juan Carlos looks over the final injury report of the 2022-23 regular season and provides the latest updates on key players as of early Sunday morning.
Weekend Injury Report: Hurts Uncertain, Jacobs Shaky, Robinson Ruled Out
21 days ago
21 days ago
Jalen Hurts should do well if he's cleared to play Sunday, while running backs like Josh Jacobs and D'Onta Foreman are in danger of sitting out or having their workloads drastically reduced.
NFL Game Previews: Week 18 Sunday Matchups
22 days ago
22 days ago
Erik Siegrist previews the Week 18 Sunday games Aaron Rodgers and the Packers take on the Lions with a playoff berth on the line.
2021 Fantasy Outlook
The Bears traded up to select Fields 11th overall in this year's draft, hoping they've found their franchise quarterback after finally giving up on Mitchell Trubisky. Fields is a strong-armed, accurate passer with good size (6-3, 227) and excellent speed. He ran a 4.46 40 at his pro day, even more impressive considering his weight. Fields' mobility might be his best asset. He can throw on the run and uses his legs to make something out of nothing when plays break down. At Ohio State, he got into trouble when he held the ball too long and sometimes failed to work through progressions, though the notion that he's a one-read QB seems overblown. He'll have time to work on those issues, as he's expected to back up free-agent Andy Dalton to start the season. If forced into action, or if coach Matt Nagy decides the future is now, Fields can probably get by on his outstanding athletic ability while he develops as a passer. Plus, he has playmaker Allen Robinson to lean on, and the Bears should get bigger contributions from deep threat Darnell Mooney and TE Cole Kmet, the team's second-round pick a year ago. Chicago also addressed the O-Line in the draft with second-round pick Teven Jenkins (6-6, 317), who is expected to start at left tackle. The Bears say they'll be patient with Fields, but it will surprise no one if he moves into the starting job this season. If so, he certainly has fantasy upside as a dual-threat QB.
More Fantasy News