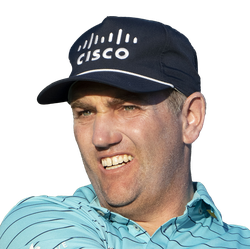 2022–23 Stats
Rank
48
Winnings
$605,152
Winnings/Entry
$100,859
Entries
6
Rounds
20
2022–23 Fantasy Outlook
It's pretty easy to know what you're going to get out of Todd, as the Tour veteran makes up for being one of the shortest hitters with excellent putting. He's lost strokes from tee-to-green in each of the last seven seasons but has still managed to make over two-thirds of his cuts the last three seasons. Todd will never be the most enticing pick but is someone to target as a cut maker on shorter courses. Read Past Outlooks
read more
Handedness Right
Status Pro
Height 6'3"
Weight 180 lbs
DOB 7/22/1985
Birthplace Pittsburgh, Pennsylvania
College Georgia
Country USA
Read More News
PGA Stats
Loading Golf Stats...
Tournament Results
Scoring
FanDuel
DraftKings
Loading Tournament Log...
PGA Advanced Stats
Loading Advanced Stats...
Recent RotoWire Articles Featuring Brendon Todd
2022 RSM Classic Betting: Picks, Odds, Predictions and Best Bets
24 days ago
24 days ago
Aaron Rai recorded a quality result last week, and Ryan Pohle is willing to wager that he notches another at Sea Island Resort.
Yahoo DFS Golf: World Wide Technology Championship at Mayakoba Picks and Strategy
37 days ago
37 days ago
The numbers suggest Hayden Buckley will be one of the best value picks in this week's contests on Yahoo, and Bryce Danielson recommends finding a spot for him in your lineups.
2022 World Wide Technology Championship at Mayakoba Betting: Picks, Odds, Predictions and Best Bets
38 days ago
38 days ago
Ryan Pohle breaks down the betting board for this week's tournament and explains why he has high hopes for Russell Henley.
FanDuel PGA: World Wide Technology Championship at Mayakoba Picks and Strategy
38 days ago
38 days ago
Justin Lower has been locked in of late, and that helps him land a spot on Ryan Andrade's list of golfers to go after in this week's contests on FanDuel.
DraftKings PGA: World Wide Technology Championship at Mayakoba Picks and Strategy
38 days ago
38 days ago
Billy Horschel has a few things working in his favor this week, and Len Hochberg suggests looking his way in the latest contests on DraftKings.
Past Fantasy Outlooks
2022
2020
2019
2015
2014
Todd came back to Earth a bit last season after an incredible two-win campaign the season before. Todd had just three top-10s and ended the season by missing four of his last five cuts. His putter was still very strong, but he loses so many strokes off the tee and approaching the greens due to his lack of length. There just isn't a whole lot of upside unless Todd gets red hot with the putter on shorter courses.
Exceeding all expectations throughout a bounce-back beyond belief during the 2019-20 season, Todd notched back-to-back wins in November at the Bermuda Championship and Mayakoba Golf Classic after missing four consecutive cuts from the Greenbrier through the Shriners Hospitals for Children Open to begin the fall series. A rapid rise to the top spot in the FedEx Cup standings at the time didn't bother Todd, as he immediately collected another top-5 at the RSM Classic following his victories. He would contend here and there throughout the remainder of the season but a couple Sunday meltdowns caused him to fall to 156th in Round 4 scoring average. Nonetheless, it's been quite a resurgence for the 35-year-old who contemplated leaving the game altogether after missing 39 of 44 cuts across a three-year span from 2016-18. Todd is top 6 on Tour in driving accuracy, scrambling and one-putt percentage.
Todd amassed a substantial $5,205,939 in earnings over a two-season stretch in 2014 and 2015, but it's since been quite a struggle for the 34-year-old. He's missed the cut in a whopping 41 of his last 55 starts dating back to the 2016 season, though he did notch a quartet of top-25s in 2019 before also tying for second at the Nationwide Children's Hospital Championship during the Korn Ferry Tour Finals to retain status on the PGA Tour. Todd fell outside of the top-1000 in the Official World Golf Ranking after missing the cut at the U.S. Open in June, but he's back up to No. 506 heading into the 2019-20 opener.
Todd was fairly consistent the entire season last year, but it was one incredible stretch that set him apart from most of his peers. The stretch began with a win at the Byron Nelson Classic and ended two months later with a T4 at the Greenbrier Classic. In all, five top-10s in six events, three of which were top-5s. Todd looks like he has the good to build on this momentum, but he's just too pricey to take in salary cap leagues this year. In draft leagues he should go somewhere in the 3rd round.
Todd played only eight times on Web.com Tour in 2013, but packed a punch during those events. He had seven top-25s in eight starts and a win.
More Fantasy News