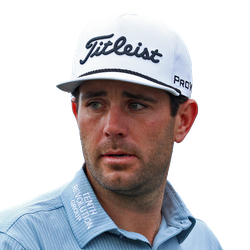 2022–23 Stats
Rank
38
Winnings
$822,062
Winnings/Entry
$91,340
Entries
9
Rounds
26
2022–23 Fantasy Outlook
Tarren really turned things around this season after nine straight missed cuts to open the year. The 31-year-old Englishman truly broke into the national spotlight at the U.S. Open, where he briefly held the clubhouse lead. He eventually finished T31 at The Country Club, and his performance was a springboard for the remainder of the year, as he made five of his final seven cuts. If he can get off to a better start in 2023, a higher position on the money list at this time next year may be in the cards. Read Past Outlooks
read more
Handedness Right
Status Pro
Height 5'10"
Weight 187 lbs
DOB 10/2/1990
Birthplace Darlington, England
College Radford
Country England
Read More News
PGA Stats
Loading Golf Stats...
Tournament Results
Scoring
FanDuel
DraftKings
Loading Tournament Log...
PGA Advanced Stats
Loading Advanced Stats...
Recent RotoWire Articles Featuring Callum Tarren See More
RotoWire Staff/Expert League Results
9 days ago
9 days ago
Rory McIlroy was the most expensive player in the annual RotoWire staff golf league over Jon Rahm and Scottie Scheffler in a format that gives a guide for season-long leagues.
Weekly Recap: Finishing with a Flourish
67 days ago
67 days ago
One season wrapped up Sunday and a portion of another did as well, and two golfers -- including Jon Rahm -- went out on a high note.
Weekly Preview: Butterfield Bermuda Championship
94 days ago
94 days ago
Seamus Power stands out as much as anyone teeing it up in Bermuda and Greg Vara expects him to be a force in this week's contests.
Weekly Preview: Fortinet Championship
136 days ago
136 days ago
The 2022-23 PGA Tour season kicks off this week, which means there are lineups to fill and bets to be made. Find out why Greg Vara suggests going with Sahith Theegala in a number of different formats.
2022-23 Golf Draft Kit: Rankings & Profiles
141 days ago
141 days ago
RotoWire's golf writers run down their rankings for the 2022-23 season, and you won't have to look far down the list to find Rory McIlroy.
2022 Fantasy Outlook
Tarren's only prior PGA Tour experience came at the 2019 U.S. Open where he posted opening rounds of 73-75 to miss the cut, but he's earned a card for the upcoming season via the Korn Ferry Tour Finals where he tied for fourth at the Nationwide Children's Hospital Championship The Englishman notched 16 total top-25s on the KFT in 2020-21, ultimately ranking top-20 in GIR percentage driving distance and actual scoring average.
More Fantasy News