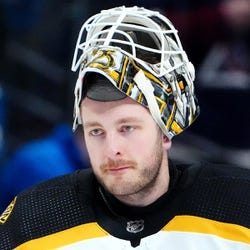 2022 Stats
W
25
L
3
SO
2
GAA
1.86
SV%
.937
ROS Projections
W
L
SO
GAA
SV%
Unlock Our Projections
2022 Fantasy Outlook
The Bruins gave Ullmark a four-year, $20 million deal in the summer of 2021 for him to presumably serve as the team's top option in goal. Instead, the emergence of rookie Jeremy Swayman essentially turned the Boston goaltending situation into a full-blown committee. Ullmark played exactly half of Boston's 82 regular season games and his numbers -- 26-10-2, 2.45 GAA, .917 save percentage -- were fine when he did start. Ullmark started each of the B's first two postseason contests before Swayman started the final five. Ullmark has the lucrative contract on his side, but Swayman is more than five years younger, making this a potential fantasy headache for a Boston team which will be without Charlie McAvoy (shoulder) and Brad Marchand (hips) early in the season. Read Past Outlooks
read more
#

Calculate Stats Over Time
Just click on any two dates.
Scoring
FanDuel
DraftKings
Yahoo DFS
FantasyDraft
Head2Head
Loading Goalie Game Log...
2022–23 Time On Ice Stats
Bruins Depth Chart
Our full team depth charts are reserved for RotoWire subscribers.
Subscribe Now
Recent RotoWire Articles Featuring Linus Ullmark See More
NHL Bets Tonight: Expert NHL Picks for Bruins vs. Lightning
2 days ago
2 days ago
Dan Dobish breaks down Thursday's Atlantic Division clash between the Bruins and Lightning in Tampa and lines up his best bets and top player props.
DraftKings NHL: Thursday Breakdown
2 days ago
2 days ago
Sasha Yodashkin’s skater recommendations Thursday include the Blues’ Jordan Kyrou against Arizona.
NHL Barometer: Risers and Fallers
4 days ago
4 days ago
Jan Levine's latest set of risers includes Seth Jones, whose 10 points in his last eight games make him a rare bright spot for the rebuilding Blackhawks.
DraftKings NHL: Tuesday Breakdown
4 days ago
4 days ago
Sasha Yodashkin is rolling with Pens veteran superstar Sidney Crosby on Tuesday against Florida.
DraftKings NHL: Sunday Breakdown
6 days ago
6 days ago
Chris Morgan previews Sunday’s DraftKings slate, rolling with a Bruins stack against the Sharks.
Past Fantasy Outlooks
2021
2020
2019
2018
2017
2015
Ullmark's numbers the past two seasons (26-20-6, 2.67 GAA, .916 save percentage) are actually quite strong when you consider he was playing for Buffalo. Ullmark's greatest issue this past year was a lack of durability as a pair of lower-body injuries sidelined him on a pair of separate occasions for a grand total of 29 games. There were rumblings Ullmark would be returning to the Sabres as an unrestricted free agent, but he instead chose to sign a four-year, $20 million deal with the Bruins. Boston has moved on from both Jaroslav Halak and Tuukka Rask, although it's possible Rask could return later in the year when he's back to full health. That leaves Ullmark as the unquestioned No. 1 man in Boston, with rookie Jeremy Swayman likely serving as the backup. Ullmark is apparently fully recovered from his lower-body injuries and stands to have a career year if he can remain healthy.
A one-year, $2.6 million contract is far from a ringing endorsement that Ullmark will be the netminder of the future for the Sabres, though he's shown the organization enough to at least compete for the starting job with Carter Hutton in 2020-21. The 26-year-old Swede went 17-14-3 with a 2.69 GAA, .915 save percentage and one shutout last year. Prior to suffering a leg injury in late-January, the rangy backstop had played in 20 of the club's previous 23 contests and was clearly the preferred choice between the pipes for then first-year coach Ralph Krueger. With the potential of a condensed schedule featuring plenty of back-to-backs, Ullmark could trend toward a 60/40 split with Hutton even if he is named the Opening Night starter.
Ullmark is expected to be brought back in via restricted free agency after recording 15 wins, a 3.11 GAA and .905 save percentage in 37 appearances (34 starts) for Buffalo last season. Those numbers are right in line with the 3.00 GAA and .908 save percentage posted by starter Carter Hutton, so Ullmark will be looking to push for at least an even timeshare in net, though he's likely to start the season in a backup role. The 26-year-old Swede probably has higher upside than Hutton should he take over the starting job and run with it, but Ullmark also has a lower floor.
Ullmark enters the season as a full-time NHL player after the Sabres elected to part ways with both of their incumbent goalies over the summer. The former SHL Goaltender of the Year is one of the finest young goaltenders to come out of Sweden in recent years, and he graduates to the show after a 44-game campaign with AHL Rochester, where he went 21-12-4 with a .922 save percentage. The Sabres see him as their franchise goalie but won't throw him into the fire just yet, instead tasking him to back up Carter Hutton. If Ullmark plays well there's no doubt the Sabres will give him more starts, but young goalies can be mercurial. Ullmark's fantasy value is as limited as his role this season, but he's a name to remember for the future.
Ullmark will serve as AHL Rochester's starter for the 2017-18 season as he continues to acclimate himself in North America. The former Swedish League Goalie of the Year went 27-26-2 in 55 games for Rochester last year, and allowed three goals on 36 shots in his only start for the Sabres. Ullmark is unlikely to suit up for the Sabres unless Robin Lehner or Chad Johnson get injured.
Ullmark, the 2014 Swedish Hockey League Goalie of the Year, had a tough campaign last year, suffering an injury that resulted in his GAA ballooning to 3.12 and his save percentage dropping to .904. MODO wasn't a strong team and Ullmark's poor play didn't help matters, but he's still regarded as one of the world's best young goaltenders and will make his North American debut this season. He will begin his career with AHL Rochester, where he will attempt to win the starting job over Andrey Makarov to kick off his career.
More Fantasy News