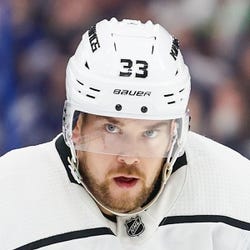 2022 Stats
G
5
A
14
PP Pts
9
+/-
-4
PIM
8
ROS Projections
G
A
PP Pts
+/-
PIM
Unlock Our Projections
2022 Fantasy Outlook
Health was an issue for Arvidsson in his first season with the Kings in 2021-22, but he was a pleasant surprise when available. The former long-time Predator posted 20 goals in 66 games, the fourth time in his career he's reached that mark. Arvidsson also finished with 49 points , his most since the 2017-18 campaign. Arvidsson was a scratch for LA's final regular-season game before being sidelined for the entirety of the team's seven-game first round playoff loss to Edmonton. It was later revealed Arvidsson needed surgery for a herniated disc in his back, an injury which was expected to sideline him for 3-5 months. The Swede should tentatively be ready for the start of the upcoming season, but it's not a guarantee, so check back on his status during training camp. Read Past Outlooks
read more
#