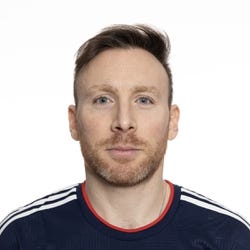 New England Revolution
View Full Depth Chart
Recent RotoWire Articles Featuring Thomas McNamara
How Do You Make Money on Sorare?
August 25, 2021
August 25, 2021
A simple question about how you make money on Sorare has an easy answer and a somewhat complicated one, which is why RotoWire's Andrew Laird is here to break it all down.
MLS Fantasy Rankings: Week 23
August 8, 2019
August 8, 2019
With two games in Week 23, New York City FC's Maximiliano Moralez moves to the top of one of JD Bazzo's positional rankings.
DraftKings Fantasy Soccer: Sunday MLS (Early) Breakdown
October 15, 2017
October 15, 2017
Nemanja Nikolic faces off against a weak Union defense as he tries to get closer to winning the Golden Boot. However, there are two other players close on his heels who also have solid matchups Sunday.
Fantasy MLS: Saturday Cheat Sheet
September 10, 2016
September 10, 2016
Portland's Fanendo Adi looks to bust out of his summer slump Saturday against Real Salt Lake as the Timbers cling to the last playoff spot in the Western Conference.
MLS Fantasy Rankings: Round 12
May 27, 2016
May 27, 2016
Schuyler Redpath and JD Bazzo break down their top players for the upcoming weekend of MLS matches, which includes a number of notable absences due to international play.
More Fantasy News