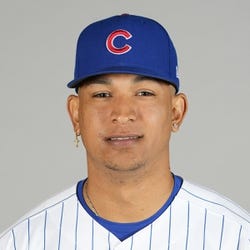 2022 Stats
W-L
2-1
ERA
3.38
WHIP
0.83
K
19
SV
0
2023 Projections
W-L
ERA
WHIP
K
SV
Unlock Our Projections
2023 Fantasy Outlook
A lat strain sidelined Alzolay for much of the 2022 season, limiting him to just 25.2 innings between the majors and minors. He didn't join the Cubs until mid-September and made six appearances in long relief. Alzolay was effective in his limited sample, generating an astounding 70.4% whiff rate on 63 sliders thrown (33% pitch usage). He struck out 19 over 13.1 innings for a 36.5% strikeout rate, while walking only two (3.8% BB%). If Alzolay maintains improved control, he could blossom in 2023, though his role is yet to be defined. Whether that's as a starter, reliever, or combination of the two in a more flexible capacity, Chicago will carefully manage Alzolay's workload throughout the season in order to get as many innings as possible from the young hurler. He's worth a late pick in NL-only or deep mixed league drafts as long as you're comfortable with the innings risk. Read Past Outlooks
read more
RANKS
#464
ADP
#

* Exit Velocity, Barrels/BBE %, Balls Hit 95+ MPH %, and Spin Rate are benchmarked against 2019 data (min 30 IP). See here for more exit velocity/barrels stats plus an explanation of current limitations with that data set.
K/BB
9.50
K/9
12.8
BB/9
1.4
HR/9
0.7
Fastball
94.9 mph
ERA
3.38
WHIP
0.83
BABIP
.301
GB/FB
1.00
Left On Base
62.5%
Exit Velocity
80.6 mph
Barrels/BBE
2.1%
Spin Rate
2342 rpm
Balls Hit 95+ MPH
12.5%
Swinging Strike
16.1%
Prospect Rankings History
View Complete Adbert Alzolay Prospect Ranking History
Advanced Pitching Stats
Loading Advanced Pitching Stats...
Defensive Stats
Loading MLB Defensive Stats...
Stats Vs Today's Lineup
Want more matchup stats?
View Adbert Alzolay vs. Batter Stats
Loading Matchup Stats...
Cubs Depth Chart
Our full team depth charts are reserved for RotoWire subscribers.
Subscribe Now
Recent RotoWire Articles Featuring Adbert Alzolay See More
NL FAAB Factor: Waiver Pickups of the Week
151 days ago
151 days ago
Jan Levine has profiled a couple of Atlanta starters who could provide fantasy worth down the stretch.
The Z Files: Sometimes, Crime Does Pay
258 days ago
258 days ago
Todd Zola examines the league-wide stolen-base environment and identifies some speedy players who could be valuable as streaming options, including Andres Gimenez.
NL FAAB Factor: Waiver Pickups of the Week
291 days ago
291 days ago
Dan Marcus urges you to check and see if Odubel Herrera is still available in your leagues.
NL FAAB Factor: Waiver Pickups of the Week
298 days ago
298 days ago
An impressive Opening Day debut has vaulted a certain Mets starter up on Jan Levine's recommendations list.
NL FAAB Factor: Waiver Pickups of the Week
305 days ago
305 days ago
Jan Levine kicks off the column for the season and dives right into all the NL positional battles.
Past Fantasy Outlooks
2022
2021
2020
2018
After he pitched only 21.1 innings in 2020, the Cubs aimed to manage Alzolay's workload last season. In April, they took advantage of a fourth option year by sending him to the alternate training site when a fifth starter wasn't needed. An IL stint for a blister and later for a hamstring helped limit Alzolay's innings, but the Cubs still used him as a reliever after he was activated Sept. 1. He finished with 125.2 innings, so assuming Alzolay is reinserted into the rotation, he should be restriction free. Alzolay posted an 18.1 K-BB%, ranking 38th among pitchers with at least 120 innings. Homers were an issue, with 22 of his 29 yielded coming from a lefty swinger. Alzolay's 94-mph fastball is just a bit above average, but compared to the rest of the Cubs' rotation, it seems like triple-digits. Fewer walks and an out pitch against left-handers would be welcome, but as is, Alzolay has streaming appeal.
Alzolay didn't crack the Cubs' Opening Day 30-man roster. After a month at the alternate site, he bounced back and forth between South Bend and the North Side the final month, making four starts in six appearances. Alzolay's 2.95 ERA and 1.17 WHIP were deflated by a .256 BABIP, but a 33.3 K% is encouraging. Alzolay's 14.9% walk rate is dangerously high, especially once he experiences a BABIP correction. That said, a 4.15 SIERA and 3.62 xFIP offer encouragement. Alzolay features a four-seam fastball, hard sinker and a slider, mixing in some changeups against left-handers. His slider is his primary strikeout pitch. This is a starter's repertoire, and Alzolay may still be a rotation mainstay, but with a little tweaking, he could be a dominant reliever. He'll likely have an innings limit, but Alzolay should be given a chance to break camp in the Cubs' rotation.
Alzolay reached the big leagues for the first time at age 24 but didn't look great in 12.1 innings, allowing 10 runs and walking nine batters. His 4.41 ERA in 15 starts for Triple-A Iowa isn't too exciting either, but his 32.3 K% in those starts provides some reason to be excited for Alzolay's future. Whether that future comes in the rotation or the bullpen remains to be seen. Alzolay's smaller frame and lack of a strong third pitch to complement his fastball and curve would seem to point in the latter direction. He has the tools to become a strong late-inning option for a team that has lacked stability in that area, though relieving won't give him much fantasy value unless he's in the closer conversation. If he does get a run in the rotation, Alzolay has a bit of upside as a potential high-strikeout streamer, but it would probably take an injury for an opportunity to open up.
If Alzolay were in a better farm system, he would blend in, but he will be ranked near the top of the Cubs' system by most outlets, and unnecessary dynasty-league hype will follow. He is the only pitcher in that system with some upside who is also relatively close to the majors. Indeed, proximity to the big leagues may be his most appealing trait. His plus fastball sits at 93-94 mph, and he has a quality breaking ball, but his changeup is a distant third pitch, and his curveball is by no means a hammer. Alzolay has above-average command, which allowed him to hold his own in the lower levels before he experienced a velocity bump last season. With only seven starts at Double-A, he may head back to the Southern League, but it's possible he is assigned straight to Triple-A after spring training. The Cubs could call upon Alzolay during his age-23 season, whether to plug a hole in the rotation or work in middle relief. Unless his changeup really comes along, he profiles as a No. 4 starter or setup man.
More Fantasy News