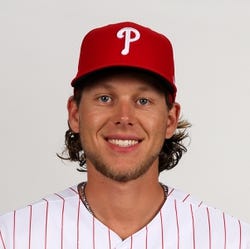 2022 Stats
AVG
.280
HR
13
RBI
72
R
79
SB
2
2023 Projections
AVG
HR
RBI
R
SB
Unlock Our Projections
2023 Fantasy Outlook
Bohm posted a .647 OPS and 26.6 percent strikeout rate as a sophomore in 2021, but he took a major step forward last season and had a 17.4 percent strikeout rate and .280/.315/.398 slash line. He played in 152 games and totaled 13 home runs, 72 RBI, 79 runs and two stolen bases, though his defense at third base remains subpar. Less encouraging was a drop in his already-low walk rate (down to 5.0 percent), which somewhat mitigated his improved average. Bohm saw his O-Swing rate rise 4.5 percentage points but still significantly improved his contact rate from 2021, and it seems unlikely he's able to continue that trend long term. Entering his age-26 season, Bohm's low power and minimal work on the basepaths limit his fantasy potential, though his .282 average with RISP could again lead to solid counting stats. Read Past Outlooks
read more
RANKS
#177
ADP
#

* Exit Velocity and Barrels/PA % are benchmarked against 2019 data (min 400 PA) and Hard Hit Rate is benchmarked against last season's data (min 400 PA). See here for more exit velocity/barrels stats plus an explanation of current limitations with that data set.
BB/K
0.28
BB Rate
4.9%
K Rate
17.4%
BABIP
.319
ISO
.118
AVG
.280
OBP
.315
SLG
.398
OPS
.713
wOBA
.312
Exit Velocity
90.2 mph
Hard Hit Rate
31.5%
Barrels/PA
5.2%
Expected BA
.290
Expected SLG
.436
Sprint Speed
23.8 ft/sec
Ground Ball %
46.1%
Line Drive %
23.5%
Fly Ball %
30.5%
Prospect Rankings History
View Complete Alec Bohm Prospect Ranking History
Advanced Batting Stats
Loading Advanced Batting Stats...
Additional Stats
Games By Position
Defensive Stats
Loading Games Played by Position...
Loading MLB Defensive Stats...
Batted Ball Stats
Loading Batted Ball Stats...
Stats Vs Upcoming Pitchers
Want more matchup stats?
View Alec Bohm vs. Pitcher Stats
Loading Matchup Stats...
Phillies Depth Chart
Our full team depth charts are reserved for RotoWire subscribers.
Subscribe Now
Recent RotoWire Articles Featuring Alec Bohm See More
MLB Roundtable Rankings: 2023 Fantasy Baseball Top 300
4 days ago
4 days ago
From Trea Turner to Spencer Torkelson, RotoWire's Roundtable Rankings crew offers their combined top 300 fantasy baseball rankings.
Collette Calls: Value in the Scrap Heap for 2023
26 days ago
26 days ago
Jason Collette's annual overview of overlooked players includes Eduardo Rodriguez, who shouldn't be forgotten about despite a poor first season in Detroit.
FanDuel MLB: Saturday World Series Game 6 Targets
92 days ago
92 days ago
Chris Bennett tackles picks for Game 6 of the World Series and suggests Rhys Hoskins against lefty Framber Valdez.
DraftKings MLB: Saturday Breakdown
92 days ago
92 days ago
There's one team Dan Marcus definitely prefers for Game 6. Read on to see if you can figure it out.
DraftKings MLB: Wednesday Breakdown
95 days ago
95 days ago
Game 4 goes Wednesday night in Philly, and Dan Marcus has your DraftKings player recommendations.
Past Fantasy Outlooks
2022
2021
2020
2019
Bohm was never likely to repeat the .338 average he produced in his 44-game debut in 2020, but his 20.0 K% and reputation as a strong contact hitter meant that he was still supposed to be strong in that area. He took a big step backwards in his sophomore season, however, hitting just .247/.305/.342. His strikeout rate jumped to 26.6 percent, and he continued to lack power, homering just seven times in 115 games while posting a 6.6% barrel rate. Bohm's contact-over-power profile requires quite a lot of contact if he's to be an everyday player at third base, especially as he's been a poor defender there, so seeing him suddenly whiff more than average was a major concern. The Phillies eventually demoted him to the minors in late August, casting doubts on his role for 2022. There's certainly potential for the 2018 third-overall pick to right the ship, but he provided zero reason to get excited in 2021.
The Phillies kept Bohm off the big-league roster until mid-August in order to delay his eventual free agency by a year, but given his immediate success and the fact that they missed the playoffs by just a single game, they probably regret that decision. The young third baseman looked like he belonged from the start and went on to hit .338/.400/.481 in 44 games. While it did take a .410 BABIP to get him there, Statcast was still quite happy with his performance, giving him a .286 xBA and a .464 xSLG. He'll need to add a bit more power to become a truly exciting fantasy option, as he homered just four times as a rookie, but a player with his contact ability and 6-foot-5 frame should be able to do that as he matures. That contact ability is perhaps the most impressive part of his profile, as he posted a 13.8% strikeout rate in the minors and a 20.0% mark as a rookie.
Bohm hit .311/.379/.513 with 23 home runs, a 10.2 BB% and 14.8 K% in 147 games across stops in the South Atlantic, Florida State and Arizona Fall leagues in his first full season after the Phillies selected him with the No. 3 overall pick in 2018. He had a 35.2 Hard% (excluding AFL), which, combined with his high contact rate, portends at least an above-average hit tool. The .231 ISO he logged at Double-A is misleading, as he hit just .242/.329/.398 away from the extremely hitter-friendly park in Reading. He looks like a power hitter (6-foot-5, 225 pounds), but we have not seen proof that he will get to plus game power. For a player who is already getting some work at first base, that could be an issue. He will open the year with Triple-A Lehigh Valley in another park that favors hitters and will probably be playing third base in the majors at some point this summer, even though first base is a better fit.
Bohm, the No. 3 pick and recipient of the draft's fourth-largest bonus ($5.85 million), had a rough pro debut, but it probably won't greatly affect the way people view him. Those who were high on him before the draft can chalk it up to a small sample size and those who were low on him saw what they expected to see. Coming into the draft, Bohm was seen by many as a third baseman with the potential for a 60-grade hit tool and 70-grade power. The naysayers saw a R/R slugger who didn't face strong competition at Wichita State and whose poor defense would eventually force a move to first base -- where there would be a lot of pressure on his bat. He made plenty of contact in the New York-Penn League (15.7 K%). However, his batted-ball profile (56.5 GB%, 11.8 LD%, 42.1 Oppo%) made it difficult for him to do damage. Already 22 years old, the clock is ticking on Bohm. If he hits a ton this year, all will be forgiven. If not, the "bust" label will be thrown around.
More Fantasy News