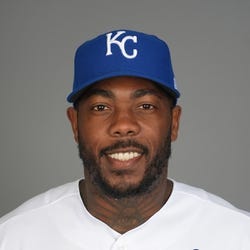 2022 Stats
W-L
4-4
ERA
4.46
WHIP
1.43
K
43
SV
9
2023 Projections
W-L
ERA
WHIP
K
SV
Unlock Our Projections
2023 Fantasy Outlook
After still showing signs of dominance during the 2021 season, last year proved that Chapman's days of being an elite closer are probably over. The southpaw was limited to just 36.1 innings after two trips to the IL, first for an Achilles injury, then for a leg infection that developed after getting a tattoo. Chapman struggled when healthy, as his 4.46 ERA, 1.43 WHIP and 26.9% strikeout rate were the worst marks of his career. Combine the latter with a bloated 17.5% walk rate that would have been the worst among relievers if he pitched enough innings to qualify, his K-BB percentage was merely in the single digits at 9.4%. The 35-year-old still throws hard, averaging 97.7 mph on his 4-seamer, but there may not be a huge market for the free-agent. Chapman was left off the Yankees playoff roster after missing a team workout and may be more of a headache at this point of his career than an asset. Read Past Outlooks
read more
RANKSFrom Preseason
#