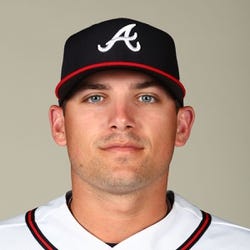 2022 Stats
AVG
.273
HR
38
RBI
93
R
90
SB
2
2023 Projections
AVG
HR
RBI
R
SB
Unlock Our Projections
2023 Fantasy Outlook
Riley now has 3.16 years of major league service (trust us, don't look it up,) and has quickly established himself as one of the premier power hitters in baseball with elite metrics in Barrel%, Average Exit Velocity, HardHit%, and awesome walk up music. The expected stats from 2021 told us the .300 average was an outllier, so the 30-point drop in batting average did not come as much of a surprise. That said, he does profile as someone who should see some type of bump in batting average with the shift rules changing this season. Sure, he doesn't walk that often and his strikeouts are a bit on the high side, but this is a modern day Mike Schmidt at the plate who may eventually need a new defensive position given his limitations at the hot corner. He is a solid four-category performer who continues to improve his draft status and finished this season as the 21st most valuable player in standard formats. There is a strong chance he does not make it to the 3rd round this season so plan accordingly. Read Past Outlooks
read more
RANKSFrom Preseason
#