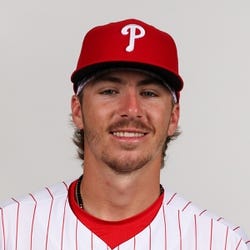 2022 Stats
AVG
.234
HR
10
RBI
49
R
58
SB
12
2023 Projections
AVG
HR
RBI
R
SB
Unlock Our Projections
2023 Fantasy Outlook
A strong Grapefruit League season earned Stott a spot on the Phillies' Opening Day roster. He played sparingly, getting some reps and third and second. After posting a .114/.173/.129 line over his first 25 games spanning 70 plate appearances, Stott was optioned to Triple-A Lehigh Valley. He was recalled two weeks later, again playing sporadically. Beginning in June, Stott was installed as a regular, splitting time between second and shortstop the rest of the season. From that point, Stott slashed .258/.318/.403 with a dozen steals. He doesn't hit the ball with much authority, but Stott puts it in play and has 91st percentile sprint speed. He's slated to be a regular in 2023, and the signing of Trea Turner means he'll slot in at second base. Josh Harrison and Edmundo Sosa are also in the mix as utility options off the bench, so there may not be a significant lease if Stott struggles early in 2023. Stott's homers are capped in the low teens, but he may run more with the new rules. Read Past Outlooks
read more
RANKS
#232
ADP
#

* Exit Velocity and Barrels/PA % are benchmarked against 2019 data (min 400 PA) and Hard Hit Rate is benchmarked against last season's data (min 400 PA). See here for more exit velocity/barrels stats plus an explanation of current limitations with that data set.
BB/K
0.40
BB Rate
7.7%
K Rate
19.1%
BABIP
.274
ISO
.124
AVG
.234
OBP
.295
SLG
.358
OPS
.653
wOBA
.291
Exit Velocity
88.1 mph
Hard Hit Rate
27.4%
Barrels/PA
3.2%
Expected BA
.237
Expected SLG
.340
Sprint Speed
24.2 ft/sec
Ground Ball %
46.4%
Line Drive %
17.6%
Fly Ball %
36.0%
Prospect Rankings History
View Complete Bryson Stott Prospect Ranking History
Advanced Batting Stats
Loading Advanced Batting Stats...
Additional Stats
Games By Position
Defensive Stats
Loading Games Played by Position...
Loading MLB Defensive Stats...
Batted Ball Stats
Loading Batted Ball Stats...
Stats Vs Upcoming Pitchers
Want more matchup stats?
View Bryson Stott vs. Pitcher Stats
Loading Matchup Stats...
Phillies Depth Chart
Our full team depth charts are reserved for RotoWire subscribers.
Subscribe Now
Recent RotoWire Articles Featuring Bryson Stott See More
Collette Calls: 2023 NL East Bold Predictions
6 days ago
6 days ago
Jason Collette offers 10 bold predictions about the NL East, giving the case against Michael Harris and the case for Jorge Soler.
Todd's Takes: Reviewing the Moves and ADP
51 days ago
51 days ago
Todd Zola breaks down the early rush of offseason moves. Does Jacob deGrom's deal with the Rangers imply anything about his health?
DraftKings MLB: Thursday Breakdown
88 days ago
88 days ago
Chris Morgan’s Game 5 World Series picks include Philly’s Bryce Harper.
DraftKings MLB: Wednesday Breakdown
89 days ago
89 days ago
Game 4 goes Wednesday night in Philly, and Dan Marcus has your DraftKings player recommendations.
DraftKings MLB: Monday Breakdown
91 days ago
91 days ago
Dan Marcus sets the scene for Game 3 of the World Series happening Monday.
Past Fantasy Outlooks
2022
2021
2020
Stott's dynasty value steadily trended up in 2021, culminating in him being one of the most impressive players in the Arizona Fall League. He hit .299/.390/.486 with 16 home runs, 10 steals, a 22.2 K%, a 13.3 BB% and a strong 33.1 Hard% as a 23-year-old playing at High-A, Double-A and Triple-A. The lefty-hitting shortstop then hit .318/.445/.489 with two home runs, five steals and significantly more walks (24) than strikeouts (14) in 26 games as one of the older true prospects in the AFL. He is already 24, so Stott needs to keep this momentum going, but he is a jack of all trades who has never logged a wRC+ below 130, so it seems like a safe bet to project him as an everyday option sooner than later. Batting average and runs are his two avenues to being a category anchor in fantasy, and while he could hit double-digit home runs with double-digit steals, he is unlikely to reach 25 home runs or 15 steals in a season. There is not much left for Stott to prove in the minors, and if the DH comes to the National League, it's easy to see how Stott would fit in -- Alec Bohm would slide to first base and Rhys Hoskins would DH. He would otherwise be waiting on an injury to get his shot, or perhaps the Phillies would shift Didi Gregorius into utility role.
It was a pretty uneventful year for Stott, who still hasn't made his full-season debut after getting selected out of UNLV with the No. 14 overall pick in 2019. He spent the summer at the alternate training site, where he attempted to make strides against a mediocre crop of pitchers. Stott is a patient hitter who should make enough contact, but he is unlikely to develop plus power or a plus hit tool. Defensively, he can handle shortstop but on most teams he would end up at second base or third base. He is a solid runner who should chip in a little on the bases. Stott doesn't have any glaring holes, but he also doesn't have any carrying tools, so he will need to make it as a sum-of-the-parts prospect. The Phillies have a really weak farm system, so the fact that shortstop and second base are up for grabs long term gives him an inside track at getting a fairly long look sometime in the next year or two.
Stott can do a little bit of everything, but he lacks a plus tool and the sum of the parts may not equate to a very exciting player. Rather than assign him directly to a full-season affiliate, as is often the case with advanced college hitters, the Phillies were content to let the 14th overall pick dominate against rookie-level and short-season pitchers. He showed patience (12.4 BB%) with some power and speed, but it's hard to put much stock in his post-draft production. If he had struggled, we could ding him, but a player of his age and pedigree should have handled those levels with ease. The jump in competition from the New York-Penn League to Low-A or High-A is significant, and we do not know how Stott's skills will translate. His ceiling is an Andrew Benintendi-esque offensive producer at shortstop, but if he falls short of that, he would bat in the bottom-third of an MLB lineup.
More Fantasy News