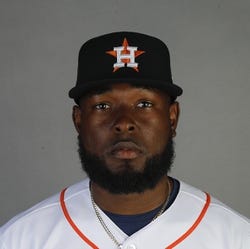 2022 Stats
W-L
11-9
ERA
2.54
WHIP
0.95
K
194
SV
0
2023 Projections
W-L
ERA
WHIP
K
SV
Unlock Our Projections
2023 Fantasy Outlook
After throwing only 101.1 innings in 2021, Javier started the year in the bullpen with the intention of conserving innings for the playoffs. The plan worked perfectly as Javier ended up starting 25 of his 30 appearances, compiling 148.2 frames before dominating in the postseason. Javier benefited from a fortunate 83.6% LOB mark and .228 BABIP. With a 26% groundball rate, his low 9.1% HR/FB mark came in handy. Javier's success wasn't just luck-driven as he posted a career high 24.3% K-BB%, the eighth best among pitchers with at least 140 innings. He used his four-seamer 60% of the time and a slider at a 28% clip. These are Javier's best pitches, but he mixes in a curve and changeup. He's due an ERA correction, but the kid gloves should be off with Javier working with no innings restrictions. Fly ball pitchers carry extra risk, but Javier's 33% strikeout rate limits concerns, so he warrants SP2/SP3 status. Read Past Outlooks
read more
RANKSFrom Preseason
#

* Exit Velocity, Barrels/BBE %, Balls Hit 95+ MPH %, and Spin Rate are benchmarked against 2019 data (min 120 IP). See here for more exit velocity/barrels stats plus an explanation of current limitations with that data set.
K/BB
3.73
K/9
11.7
BB/9
3.1
HR/9
1.0
Fastball
93.9 mph
ERA
2.54
WHIP
0.95
BABIP
.242
GB/FB
0.50
Left On Base
82.8%
Exit Velocity
79.0 mph
Barrels/BBE
3.8%
Spin Rate
2448 rpm
Balls Hit 95+ MPH
16.8%
Swinging Strike
14.1%
Prospect Rankings History
View Complete Cristian Javier Prospect Ranking History
Advanced Pitching Stats
Loading Advanced Pitching Stats...
Defensive Stats
Loading MLB Defensive Stats...
Stats Vs Today's Lineup
Want more matchup stats?
View Cristian Javier vs. Batter Stats
Loading Matchup Stats...
Astros Depth Chart
Our full team depth charts are reserved for RotoWire subscribers.
Subscribe Now
Recent RotoWire Articles Featuring Cristian Javier
World Series Picks Tonight: Expert MLB Bets and Player Props for Phillies vs Astros Game 5
28 days ago
28 days ago
Michael Rathburn breaks down the World Series Game 5 odds and dials in his best bets for Thursday's Astros-Phillies clash in Philadelphia.
DraftKings MLB: Thursday Breakdown
28 days ago
28 days ago
Chris Morgan’s Game 5 World Series picks include Philly’s Bryce Harper.
Yahoo DFS Baseball: World Series Game 5 Picks
28 days ago
28 days ago
Mike Barner previews Game 5 of the World Series on Thursday in Philadelphia.
FanDuel MLB: Wednesday World Series Targets
29 days ago
29 days ago
Chris Morgan is betting on Bryce Harper to lead his Yahoo lineups for Game 4 of the World Series on Wednesday.
MLB Picks Tonight: Expert MLB Bets and Player Props for World Series Game 4
29 days ago
29 days ago
Michael Rathburn lines up his best bets and player props for a pivotal World Series Game 4 matchup between the Phillies and Astros.
Past Fantasy Outlooks
2022
2021
2020
Javier came into 2021 with some noise given his efforts during his rookie season, but 2021 was a bit all over the place. He opened the season in the rotation, and even tied a franchise record by striking out the first eight batters of a game in his third start. By the end of May, he was 3-1 with a 3.14 ERA, 1.03 WHIP and was holding hitters to a .171 average. Despite the success, the club decided to move him to the bullpen as Jake Odorizzi and Framber Valdez joined the rotation, and Javier's value plunged as he went on to win one game, save two others and run into issues with walks and homers out of the bullpen around plenty of strikeouts. Those issues carried over into the postseason as well. In all, he showed both what he is capable of when things are going right for him as well as how bad things can get when he struggles to locate his offerings. He is at his best when he is isn't overusing his fastball.
It's fairly easy to see that Javier overachieved as a rookie with a 5-2 record and 3.48 ERA over 12 appearances (10 starts) for the Astros. He served up 11 HR in 54.1 regular-season innings, and of course the estimators will ding him for all those long balls and a 86.2 LOB% (4.94 FIP, 4.86 xFIP, 4.43 SIERA). At age 23, Javier did not light up the radar gun with a four-seamer that averaged just 92.2 mph, but his slider was virtually unhittable. The right-hander threw 227 sliders during the regular season and allowed four hits, all singles, with 24 strikeouts. The changeup and curveball were distant third and fourth offerings, and the fact that Javier is currently mostly a fastball-slider pitcher leaves open a good deal of bullpen risk. Indeed the bullpen is where Javier spent the postseason. If the third pitch comes along, Javier could take off as the other pieces are there. Don't write off the possibility.
An international signee out of the Dominican Republic, Javier was added to the Astros 40-man roster, shielding him from the Rule 5 draft. The 6-foot-1 righthander features a fastball in the low 90s, touching 96. Not surprisingly considering the organization, what Javier's fastball lacks in velocity is made up for via high spin. He throws a curve and slider, both highly reliant on rotation. Javier's fate may depend on how well he develops his change-up, an offering better with less spin. With that effective pitch to combat lefthanders, Javier's long-term role is in the rotation with the bullpen as a fallback. Javier worked at three levels last season, finishing with a short stint at Triple-A Round Rock where he'll likely start the 2020 campaign. Javier has excelled at every level. If he impresses with the Express, he could get a look as a reliever later in the season as Houston often does with young arms.
More Fantasy News