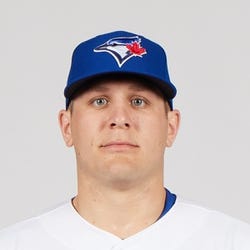 2022 Stats
AVG
.235
HR
27
RBI
74
R
79
SB
16
2023 Projections
AVG
HR
RBI
R
SB
Unlock Our Projections
2023 Fantasy Outlook
On the strength of 27 homers and 16 steals, Varsho finished as the No. 2 catcher in 5x5 roto leagues last season. His .235 average dragged him behind the Phillies' JT Realmuto, but regardless it was an incredibly impressive campaign, and most importantly for our purposes, he maintains catcher eligibility entering 2023 (31 appearances, 18 starts behind the plate). There is some frigid blue on his Statcast page, so perhaps he will continue to struggle to hit for average, but the power-speed combination from the catcher position makes Varsho a valuable asset in the rotisserie game. As good of a young player as he is, those playing in one-catcher leagues and/or points leagues should beware not to overrate Varsho based on where he ranks on two-catcher, roto cheat sheets. Read Past Outlooks
read more
RANKSFrom Preseason
#