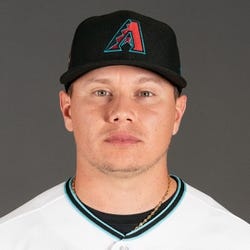 2022 Stats
AVG
.206
HR
11
RBI
29
R
28
SB
1
2023 Projections
AVG
HR
RBI
R
SB
Unlock Our Projections
2023 Fantasy Outlook
Castillo made his big-league debut in 2022 and spent the majority of the season in Pittsburgh. At first glance, his 26.5 percent strikeout rate and .206 batting average suggest he was just another of the mediocre or worse options that the Pirates trotted out during the campaign. However, there's come intrigue with a deeper dive. As a prospect, Castillo was known for his hit tool and rarely struck out at clips higher than 15 percent while working his way through the minors. That number spiked in his first taste of the majors, but so did his potential to hit for power thanks to a 9.9 percent barrel rate and 109.6 mph max exit velocity. Assuming he can bring his strikeout rate back down to levels he showed while climbing through the Yankees' minor-league system, there's the potential of a player who can hit for both a solid average and solid power. Castillo was designated for assignment by Pittsburgh in December and subsequently traded to Arizona, where he could open 2023 in a utility role. Read Past Outlooks
read more
RANKS
#559
ADP
League Majors
Bats R
Throws R
40 Man Yes
Height 5'11"
Weight 185
DOB 10/28/1997
Born Barquisimeto, Venezuela
College None
Drafted 2014 NYY
$Signed a one-year contract with the Pirates in March of 2022.

* Exit Velocity and Barrels/PA % are benchmarked against 2019 data (min 400 PA) and Hard Hit Rate is benchmarked against last season's data (min 400 PA). See here for more exit velocity/barrels stats plus an explanation of current limitations with that data set.
BB/K
0.19
BB Rate
4.9%
K Rate
26.5%
BABIP
.239
ISO
.176
AVG
.206
OBP
.251
SLG
.382
OPS
.633
wOBA
.275
Exit Velocity
89.1 mph
Hard Hit Rate
37.2%
Barrels/PA
6.7%
Expected BA
.224
Expected SLG
.389
Sprint Speed
23.4 ft/sec
Ground Ball %
39.8%
Line Drive %
19.9%
Fly Ball %
40.3%
Prospect Rankings History
View Complete Diego Castillo Prospect Ranking History
Advanced Batting Stats
Loading Advanced Batting Stats...
Additional Stats
Games By Position
Defensive Stats
Loading Games Played by Position...
Loading MLB Defensive Stats...
Batted Ball Stats
Loading Batted Ball Stats...
Stats Vs Upcoming Pitchers
Want more matchup stats?
View Diego Castillo vs. Pitcher Stats
Loading Matchup Stats...
Diamondbacks Depth Chart
Our full team depth charts are reserved for RotoWire subscribers.
Subscribe Now
Recent RotoWire Articles Featuring Diego Castillo See More
Todd's Takes: Wrapping Up Last Year's Moves
11 days ago
11 days ago
Todd Zola tackles another large set of offseason moves, including big names like Carlos Rodon as well as several players to consider late in drafts.
The Z Files: OK, I'm SOLD
58 days ago
58 days ago
Todd Zola reconsiders his stance against adding holds as a roto category, and takes a look at the impact it would have on relievers like Devin Williams.
The Z Files: Saving the Best for First
103 days ago
103 days ago
Todd Zola discusses the strategic decisions made to lock up a 2022 title in the Premature Edraftulation League, and nabs Trea Turner to headline the 2023 roster.
Closer Encounters: 2022 Saves in Review, Part 2
103 days ago
103 days ago
Ryan Rufe recaps the saves landscape in this year's NFBC Main Event and shares his own hits and misses from this past season.
Closer Encounters: 2022 Saves in Review, Part 1
109 days ago
109 days ago
Ryan Rufe recaps this past season's saves landscape. Just how many teams preferred closer committees over the conventional approach?
2022 Fantasy Outlook
Castillo was shipped to Pittsburgh along with Hoy Park in the deadline deal that sent Clay Holmes to the Yankees. The trade made sense for both sides, as the Yankees had much more need of a good reliever than the Pirates did, and Castillo and Park were blocked in New York, while Pittsburgh has plenty of at-bats to dole out at almost every position. Castillo was added to the 40-man roster this offseason as Rule 5 draft protection and should spend a good chunk of the year in the majors. He showed a well-rounded skill set across Double-A and Triple-A, hitting .278/.355/.487 with 19 home runs, nine steals, a 12.7 K% and a 10.0 BB% in 440 PA. Castillo has 50-grade power and speed, but if his excellent approach and contact ability can carry over in the majors, he could hit enough to be an everyday player who moves around the infield. He played almost evenly at shortstop, second base and third base last season.
More Fantasy News