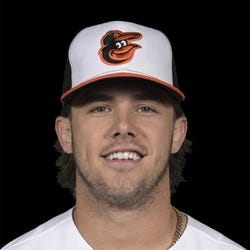 2022 Stats
W-L
1-1
ERA
5.93
WHIP
1.68
K
19
SV
1
2023 Projections
W-L
ERA
WHIP
K
SV
Unlock Our Projections
2023 Fantasy Outlook
Hall has proven that he has some of the best pure stuff of any lefty on the planet, but strike-throwing and durability continue to linger as major concerns. He threw a career-best 98 innings in his age-23 season across the four highest levels, primarily spending the year at Triple-A. Hall got his first big-league win and his first big-league save in 13.2 MLB innings that came over the final couple months of the season. His long-term role remains uncertain, but he's too talented and too young for the Orioles to pigeonhole him as a high-leverage reliever just yet. Hall's 36.1 K% led all Triple-A pitchers with at least 50 innings, but it came with a 14.2 BB%, which was the 14th-worst mark among that collection of pitchers. His 96-mph fastball, 87-mph slider and 85-mph changeup all have a chance to be 70-grade pitches in the majors - it's just a matter of whether he can command them well enough to start while also handling a starter's workload. Read Past Outlooks
read more
RANKSFrom Preseason
#

* Exit Velocity, Barrels/BBE %, Balls Hit 95+ MPH %, and Spin Rate are benchmarked against 2019 data (min 30 IP). See here for more exit velocity/barrels stats plus an explanation of current limitations with that data set.
K/BB
3.17
K/9
12.5
BB/9
4.0
HR/9
0.0
Fastball
96.3 mph
ERA
5.93
WHIP
1.68
BABIP
.465
GB/FB
2.00
Left On Base
60.9%
Exit Velocity
77.9 mph
Barrels/BBE
1.2%
Spin Rate
2317 rpm
Balls Hit 95+ MPH
9.5%
Swinging Strike
14.1%
Prospect Rankings History
Advanced Pitching Stats
Loading Advanced Pitching Stats...
Defensive Stats
Loading MLB Defensive Stats...
Stats Vs Today's Lineup
Want more matchup stats?
View DL Hall vs. Batter Stats
Loading Matchup Stats...
Orioles Depth Chart
Our full team depth charts are reserved for RotoWire subscribers.
Subscribe Now
Recent RotoWire Articles Featuring DL Hall
AL FAAB Factor: Waiver Pickups of the Week
64 days ago
64 days ago
Erik Siegrist provides a final look at available AL free agents for the 2022 season as Drew Waters looks to establish himself ahead of 2023.
MLB Pitching Prospect Draft For 2023
81 days ago
81 days ago
James Anderson, Eric Cross and Chris Clegg draft pitching prospects for 2023 value only, with Astros righty Hunter Brown solidifying his place near the top.
AL FAAB Factor: Waiver Pickups of the Week
92 days ago
92 days ago
Erik Siegrist checks out the American League waiver wire after September roster expansion as Gunnar Henderson provides a boost to Baltimore's playoff push.
MLB Barometer: Risers & Fallers
112 days ago
112 days ago
Erik Halterman's column this week features players with compelling story lines, including Aaron Judge whose 46 homers on the season put him on pace for 65.
Top 400 MLB Prospect Rankings Update
130 days ago
130 days ago
James Anderson breaks down many of the risers, fallers and additions to the newly-updated MLB top 400 prospect rankings, including what No. 1 prospect Corbin Carroll's peak stat line might look like.
Past Fantasy Outlooks
2022
2021
2020
2019
Hall's ridiculous pure stuff has been well known for years, but injuries and poor command/control still make him one of the riskier pitchers in the upper minors. The 6-foot-2 southpaw has four potentially plus to double-plus pitches, led by his 97-mph fastball that can touch triple digits. His three secondaries are all dominant, especially given where he's at in his development. However, he has never thrown 100 innings in a season, most recently dealing with a stress reaction in his elbow for most of last season. When healthy, he dominated at Double-A (31.3 K-BB%, 60.4 GB%) despite struggling to fill the zone (12.5 BB%). Even as he nears his big-league debut, the risk with Hall is extreme. There's an outside chance he stays healthy while building up his workload and improving his command enough to pitch atop a rotation. There are other scenarios where his stuff fits best in a high-leverage role out of the bullpen. He could also be headed for a James Paxton-esque career where he flashes dominance but is always a durability risk.
Since getting selected with the 21st overall pick in the 2017 draft, Hall's development hasn't been linear, but his stuff has been loud from day one. Reports out of the Orioles' alternate training site and instructs suggest his stuff is better than ever, with the 6-foot-2 southpaw's mid-90s fastball touching 99 and his improving slider touching 90 mph. He also boasts a plus changeup and above-average curveball. Having a bevy of potentially plus offerings has never been the issue for Hall. He needs to harness that electric arsenal to stick as a starter. He walked 54 batters in 80.2 innings at High-A in 2019 while striking out 33.5 percent of batters and holding opponents to a .185 average, illustrating his command/control issues and how dominant he can be when he's locating his pitches. He should head to Double-A for the start of his age-22 season and is on track for a 2022 debut.
If Hall had plus command, he would be a top-five pitching prospect. The 6-foot-2 southpaw's stuff is ridiculous and the results back that up. He had a 15.6 BB% (awful) in 80.2 innings and still had a 3.22 FIP. That should not be possible. His 70-grade, mid-90s fastball has late life and touches 97 mph, while his curveball and changeup should serve as a couple more plus pitches by the time he reaches the majors. He added a fourth-pitch slider that gives hitters a different look, compared to his big breaking hook. Carolina League batters hit .185 against him and his 33.5 K% was the second-best mark at High-A. For the second year in a row, Hall got better as the year went on -- he logged a 2.25 ERA, 1.00 WHIP and 43:16 K:BB in his final 32 innings (six starts) before he was shut down with a Grade 1 lat strain. Strike throwing will determine his fate, with outcomes ranging from No. 1 starter to setup man.
The Orioles are seen by many as the worst/unluckiest organization at developing pitching prospects. Their track record is admittedly terrible. That said, they have a great one in Hall, who is one of the four best left-handed pitching prospects in the minors. He has an excellent frame (6-foot-2, 195 pounds), an athletic, repeatable delivery and a smutty repertoire, headlined by a mid-90s fastball. His curveball and changeup could each develop into plus pitches, which gives him true frontline upside. Hall gave up five runs in a June 2 start, but did not give up more than one run in his next 13 starts, posting a 0.89 ERA, 1.02 WHIP and 71 strikeouts in 60.2 innings to close out the season. The Orioles handled him very carefully -- he never topped 90 pitches and only topped 80 pitches in three of his 22 outings. He is poised for a big age-20 season, and may earn a promotion to Double-A before the All-Star break.
More Fantasy News