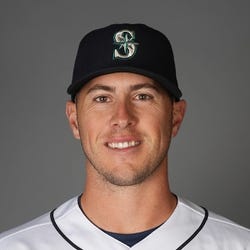 2022 Stats
AVG
.224
HR
6
RBI
24
R
41
SB
21
2023 Projections
AVG
HR
RBI
R
SB
Unlock Our Projections
2023 Fantasy Outlook
Moore maintains dual eligibility for the 2023 season without a clear path to regular playing time unless multiple injuries beset the Seattle ball club. His 42 steals over the past two seasons is 12th-best in the league, which is where all of his fantasy value is. The 21 steals in each season had different foundations as he did 2021 with more playing time while this past season, it was done more with him getting on base with more walks and pinch running opportunities. He does not make enough overall contact and is more comfortable on the short side of a platoon limiting his fantasy value to AL-Only formats or very deep mixed league formats given his career batting average in nearly 1100 plate appearances is just eight points above the Mendoza Line and with a 30% career strikeout rate. He'll likely be limited to a utility role to begin 2023 since the Mariners stabilized the keystone and corner outfield by acquiring Kolten Wong, Teoscar Hernandez and A.J. Pollock during the offseason. Read Past Outlooks
read more
RANKS
#484
ADP
#

* Exit Velocity and Barrels/PA % are benchmarked against 2019 data (min 400 PA) and Hard Hit Rate is benchmarked against last season's data (min 400 PA). See here for more exit velocity/barrels stats plus an explanation of current limitations with that data set.
BB/K
0.45
BB Rate
13.4%
K Rate
29.5%
BABIP
.320
ISO
.161
AVG
.224
OBP
.368
SLG
.385
OPS
.753
wOBA
.340
Exit Velocity
87.2 mph
Hard Hit Rate
31.8%
Barrels/PA
6.7%
Expected BA
.202
Expected SLG
.360
Sprint Speed
25.1 ft/sec
Ground Ball %
32.3%
Line Drive %
17.7%
Fly Ball %
50.0%
Advanced Batting Stats
Loading Advanced Batting Stats...
Additional Stats
Games By Position
Defensive Stats
Loading Games Played by Position...
Loading MLB Defensive Stats...
Batted Ball Stats
Loading Batted Ball Stats...
Stats Vs Upcoming Pitchers
Want more matchup stats?
View Dylan Moore vs. Pitcher Stats
Loading Matchup Stats...
Mariners Depth Chart
Our full team depth charts are reserved for RotoWire subscribers.
Subscribe Now
Recent RotoWire Articles Featuring Dylan Moore See More
The Z Files: NFBC Holdem Rankings and Strategies
111 days ago
111 days ago
Todd Zola shares his gameplan and his rankings for NFBC Postseason Holdem contests.
MLB: Postseason Cheat Sheet and Strategy
115 days ago
115 days ago
Todd Zola tackles the MLB Postseason Cheat Sheet for RotoWire and discusses his approach to postseason leagues this year.
AL FAAB Factor: Waiver Pickups of the Week
119 days ago
119 days ago
Erik Siegrist provides a final look at available AL free agents for the 2022 season as Drew Waters looks to establish himself ahead of 2023.
FanDuel MLB: Tuesday Targets
131 days ago
131 days ago
Chris Bennett checks out Tuesday's slate as Charlie Morton leads the charge for Atlanta against the Nationals.
AL FAAB Factor: Waiver Pickups of the Week
133 days ago
133 days ago
Erik Siegrist looks over the available talent in the AL as Carlos Santana tries to power the Mariners into the playoffs.
Past Fantasy Outlooks
2022
2021
2020
Players with 83rd percentile sprint speed should focus on contact and hitting line drives and grounders, right? Moore must not agree as he posted a 29.4% K% and a 31.7% groundball rate. Sure, lofting so many balls will spawn homers, but with a low 90 mph average exit velocity on fly balls, most will be caught. A 50% flyball rate in tandem with a .105 BABIP on fly balls resulted in an overall .229 BABIP. Combine that with a bunch of strikeouts and it's clear why Moore's average was the fourth lowest among hitters with at least 350 PA. He swiped 21 bags, but they came with baggage. Moore's xBA was just over the Mendoza line, but he still doesn't play to his skills. With Seattle in go-for-it mode, it's hard to imagine Moore playing every day, he's more likely going to fill in all over the diamond. Steals are dwindling but the best approach is to avoid having to draft a guy like Moore.
The typical script says rookies come up and do well, but then are prone to sophomore slumps. Moore flipped that script and followed up an underwhelming rookie season with a strong sophomore year. His rookie year was not terrible as the former UCF hitter showed power and speed, but a 55% success rate in steals was as bad as his .206 BA. He did better in both areas in 2020, but there is still more room for improvement in his stolen-base success rate as well as his strikeout rate. There is quite a bit of red ink on his StatCast page related to his ability to hit with authority around the strikeouts ,teasing there may be more in the third year. A late bloomer at 28 years old, Moore has dual eligibility and a guaranteed spot in the Seattle lineup, making him an intriguing target for 2021. His rookie year gave us a floor for the skill set. We may have yet to see his ceiling.
Moore's rookie season was a mixed bag. He spent most of the campaign hovering around the Mendoza Line, ending the season with a .206 average. However, Moore made the 51 hits he did collect count as 25 of them went for extra bases, resulting in a promising .182 ISO. Meanwhile, he racked up 11 stolen bases but got thrown out nine times. Finally, he showed the ability to take a walk with an 8.9 BB% but struck out far too often, ending the season with an ugly 33.0 K%. Defensively, Moore began 2019 roaming the infield before his defensive struggles -- including a game in which he committed three consecutive ninth-inning errors -- led to a move to the outfield, where he climbed near the top of the Statcast Outfielder Jump leaderboard. Altogether, Moore's up-and-down season paints the picture of a player best served to fill a utility role, a likelihood for 2020 that renders him irrelevant in most fantasy formats.
More Fantasy News