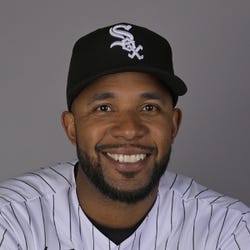 2022 Stats
AVG
.249
HR
17
RBI
58
R
66
SB
18
2023 Projections
AVG
HR
RBI
R
SB
Unlock Our Projections
2023 Fantasy Outlook
Andrus had a .237/.301/.373 slash line in 106 games for the A's before he was cut loose in August, but he found success for the White Sox the rest of the way with a .773 OPS. In total the veteran shortstop had 17 home runs (the second-highest total of his career), 58 RBI and 18 stolen bases, production that's worth noting given the depressed offense around the league. He also continues to provide a strong glove, and his 105 wRC+ was the first time he's delivered an above-average bat since 2017. Andrus' late resurgence should be able to secure him a major-league contract during the offseason, though it remains to be seen if any team is willing to sign him to be their primary shortstop given his overall struggles over the few years. Read Past Outlooks
read more
RANKS
#