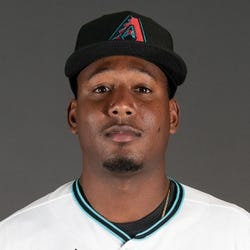 * Exit Velocity and Barrels/PA % are benchmarked against 2019 data (min 400 PA) and Hard Hit Rate is benchmarked against last season's data (min 400 PA). See here for more exit velocity/barrels stats plus an explanation of current limitations with that data set.
BB/K
0.49
BB Rate
10.0%
K Rate
20.6%
BABIP
.243
ISO
.067
AVG
.195
OBP
.285
SLG
.262
OPS
.547
wOBA
.254
Exit Velocity
85.0 mph
Hard Hit Rate
22.2%
Barrels/PA
1.4%
Expected BA
.213
Expected SLG
.282
Sprint Speed
25.0 ft/sec
Ground Ball %
46.7%
Line Drive %
21.5%
Fly Ball %
31.9%
Prospect Rankings History
View Complete Geraldo Perdomo Prospect Ranking History
Advanced Batting Stats
Loading Advanced Batting Stats...
Additional Stats
Games By Position
Defensive Stats
Loading Games Played by Position...
Loading MLB Defensive Stats...
Batted Ball Stats
Loading Batted Ball Stats...
Stats Vs Upcoming Pitchers
Want more matchup stats?
View Geraldo Perdomo vs. Pitcher Stats
Loading Matchup Stats...
Diamondbacks Depth Chart
Our full team depth charts are reserved for RotoWire subscribers.
Subscribe Now
Recent RotoWire Articles Featuring Geraldo Perdomo
NL FAAB Factor: Waiver Pickups of the Week
183 days ago
183 days ago
A couple middle infielders highlight Dan Marcus's list of NL additions.
NL FAAB Factor: Waiver Pickups of the Week
211 days ago
211 days ago
Jan Levine looks at a couple players who should return soon and produce decent numbers.
NL FAAB Factor: Waiver Pickups of the Week
218 days ago
218 days ago
Jan Levine is back and wants you to know Taijuan Walker is still available in plenty of fantasy leagues.
Bernie on the Scene: What I Saw in Arizona Spring Training, Part Two
231 days ago
231 days ago
Bernie Pleskoff offers his observations of spring training Cactus League games, including thoughts on White Sox pitcher Dylan Cease.
NL FAAB Factor: Waiver Pickups of the Week
232 days ago
232 days ago
Dan Marcus urges you to check and see if Odubel Herrera is still available in your leagues.
Past Fantasy Outlooks
2022
2021
2020
2019
Perdomo was so bad in a brief cup of coffee with the big club to start the year (1-for-13) and then after a demotion to Double-A (.151/.305/.204 slash line) that he was placed on the development list and sent to the team's spring training complex to rebuild his swing and get a mental reset midseason. He was a completely different hitter when he was activated in early August, hitting .329/.414/.521 with five home runs, six steals, a 20.7 K% and an 11.2 BB% in 38 games across Double-A and Triple-A. Perdomo was rewarded with another brief stint in the majors over the final week of the season, and he hit .333 with three doubles and one triple in 24 PA. He has always been seen as a glove-first shortstop, but the fact Perdomo has never walked at less than a 12% clip and has plus speed means that he could be an intriguing fantasy option if he is a leadoff hitter and not a No. 8 or 9 hitter. Nick Ahmed is under contract through the 2023 season, but he is not making so much money that he couldn't shift to a part-time role if Perdomo looks like the superior option at some point this season or next.
Perdomo doesn't have loud tools, but he has a career .411 OBP in the minors and is a lock to stick at shortstop, so he should have a long career. His tools play up due to excellent instincts. At 6-foot-3 and with a quick, whippy bat, he could eventually tap into 20-homer power, but we haven't seen that manifest yet. The switch hitter puts more of a charge into the ball from the left side. Perdomo, a 55-grade runner, relies on long strides and good instincts to steal bases. He was 20-for-28 on SB attempts at Low-A, but was 8-for-16 in the Cal League and Arizona Fall League. His defense will keep him in the lineup, and he could be a leadoff hitter with his plate discipline and potentially plus hit tool. Perdomo was limited by a minor foot injury during fall instructs. He turned 21 this offseason and already had success at High-A and the AFL, so he should open at Double-A and could move quickly to Triple-A.
Perdomo put on a clinic at Low-A, High-A and the Arizona Fall League, all as a 19-year-old switch hitter who will stick at shortstop. He had a slow start in the cold conditions of the Midwest League, but from the start of summer (June 21) on, he hit .309/.406/.398 with an 11.7 BB% and 14.9 K% across three levels. Power is not yet a big part of his game, but he is 6-foot-3 and generates plus bat speed with his whippy swing, so the expectation is that he will be a 25-homer guy once physically mature -- there are some similarities to Didi Gregorius with regards to size, defense and power upside. An above-average runner, Perdomo was 20-for-28 on SB attempts at Low-A, but was 8-for-16 in the Cal League and AFL. He could swipe 10-15 bases in his early years. His advanced approach and hit tool have him on a fast track, but he will probably face an adjustment period at some point in his age-20 season.
Perdomo emerged in rookie/short-season leagues late enough in the season that the hype surrounding him did not fully materialize until after he played his final game. He entered the year under the radar, as he only signed for $70,000 out of the Dominican Republic in 2016. A switch hitter whose defensive home is not set in stone, Perdomo has a projectable 6-foot-2, 184-pound frame and a whippy swing that should eventually generate 20-homer pop, primarily from the left side. He is at least a 55-grade runner and has good instincts on the bases, leading to 24 steals on 30 tries in 57 games. However, what will carry him to an everyday role in the big leagues will be his advanced approach and hit tool. He hits line drives and flyballs to all fields and logged a 44:39 K:BB in 257 PA across the AZL, Pioneer League and Northwest League. Perdomo will head to the Midwest League for his age-19 season where his stock could explode if he meets expectations.
More Fantasy News