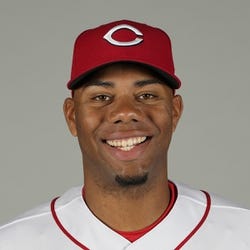 2022 Stats
W-L
5-13
ERA
4.44
WHIP
1.21
K
164
SV
0
2023 Projections
W-L
ERA
WHIP
K
SV
Unlock Our Projections
2023 Fantasy Outlook
Greene comes with a once-in-a-lifetime fastball, a ton of hype and a lot of promise. As a rookie in 2022, Greene threw 337 pitches at 100-plus mph, the most ever for a starting pitcher in a single season, shattering Noah Syndergaard's previous record of 199 pitches at that velocity. It wasn't all sunshine and roses, however. Greene endured a couple blowups and admitted to bagging his changeup on occasion. As tremendous as the fastball velo is, he will likely need more than the fastball and slider to enjoy sustained success in the rotation at the big-league level. He needs to keep hitters honest and prevent them from sitting dead red on the heater (17 homers against the four-seamer last season). The Reds will give the righty a long leash to make it as a starting pitcher. Expect high highs but also additional growing pains in 2023. Read Past Outlooks
read more
RANKS
#118
ADP
#