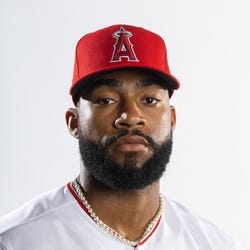 2022 Stats
AVG
.223
HR
8
RBI
27
R
22
SB
4
2023 Projections
AVG
HR
RBI
R
SB
Unlock Our Projections
2023 Fantasy Outlook
Adell flashed a bit in 2021 with a .703 OPS but was unable to build on that production last season. He finished 2022 with .223/.263/.372 slash line and 37.9 percent strikeout rate in what ended up being an all-around disappointing campaign for the Angels. The former top prospect's luster has worn off since he made his MLB debut in 2020, leading the Halos to acquire Hunter Renfoe to fill right field for 2023, with Mike Trout and Taylor Ward rounding out the outfield. Adell now has no clear path to playing time and could return to the Triple-A level, where he once again excelled last year with a .920 OPS. Adell will turn 24 years old in April and still has plenty of time to turn it around, but another poor showing in the majors is likely to test the organization's patience. Read Past Outlooks
read more
RANKSFrom Preseason
#