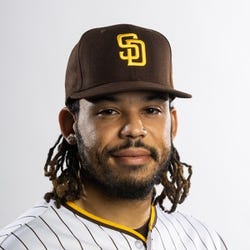 2022 Stats
AVG
.250
HR
1
RBI
5
R
4
SB
0
2023 Projections
AVG
HR
RBI
R
SB
Unlock Our Projections
2023 Fantasy Outlook
Campusano doesn't have much more to prove with his bat in the minors, as he impressed again for Triple-A El Paso last season, posting a .298/.363/.483 slash line with 14 homers and 60 RBI over 358 plate appearances. His 17.3% strikeout rate and 9.4% walk rate further shone light on his readiness to hit in the majors, though he was just okay with a .250/.260/.333 slash line and a 1:11 BB:K over 50 big-league plate appearances with San Diego. That small sample isn't likely to divert the Padres' view of Campusano as their catcher of the future, and it's telling that in November they chose to non-tender veteran backstop Jorge Alfaro, who worked in a timeshare with Austin Nola last season. Nola will still be around in 2023, but Campusano is going to get an expanded opportunity and could emerge as the team's primary catcher if his bat plays up as expected and his glove is at least passable. The position is no longer the wasteland we've grown accustomed to in fantasy, but it's nonetheless a good idea to keep an eye on Campusano in redraft to see how his playing time shakes out. Read Past Outlooks
read more
RANKS
#449
ADP
League Majors
Bats R
Throws R
40 Man Yes
Height 5'11"
Weight 232
DOB 9/29/1998
Born Augusta, GA
College None
Drafted 2nd Rd 2017 SD
$Signed a $1.3 million contract with the Padres in June of 2017.

* Exit Velocity and Barrels/PA % are benchmarked against 2019 data (min 400 PA) and Hard Hit Rate is benchmarked against last season's data (min 400 PA). See here for more exit velocity/barrels stats plus an explanation of current limitations with that data set.
BB/K
0.09
BB Rate
2.0%
K Rate
22.0%
BABIP
.297
ISO
.083
AVG
.250
OBP
.260
SLG
.333
OPS
.593
wOBA
.259
Exit Velocity
87.7 mph
Hard Hit Rate
32.5%
Barrels/PA
4.0%
Expected BA
.230
Expected SLG
.355
Sprint Speed
23.6 ft/sec
Ground Ball %
44.7%
Line Drive %
13.2%
Fly Ball %
42.1%
Prospect Rankings History
View Complete Luis Campusano Prospect Ranking History
Advanced Batting Stats
Loading Advanced Batting Stats...
Additional Stats
Games By Position
Defensive Stats
Loading Games Played by Position...
Loading MLB Defensive Stats...
Batted Ball Stats
Loading Batted Ball Stats...
Stats Vs Upcoming Pitchers
Want more matchup stats?
View Luis Campusano vs. Pitcher Stats
Loading Matchup Stats...
Padres Depth Chart
Our full team depth charts are reserved for RotoWire subscribers.
Subscribe Now
Recent RotoWire Articles Featuring Luis Campusano See More
Collette Calls: Hitting Bold Predictions Reviews
113 days ago
113 days ago
Jason Collette looks back at his bold predictions from last offseason, examining what went right and what went wrong.
The Z Files: NFBC Holdem Rankings and Strategies
115 days ago
115 days ago
Todd Zola shares his gameplan and his rankings for NFBC Postseason Holdem contests.
NL FAAB Factor: Waiver Pickups of the Week
158 days ago
158 days ago
Jan Levine packs this week's edition with a number of pitchers who may be set to receive more opportunities.
Past Fantasy Outlooks
2022
2021
2020
Despite strong offensive statistical showings in the upper levels of the minors, Campusano still appears to be third on the Padres' depth chart at catcher. Austin Nola and Victor Caratini may not be better hitters than Campusano, but they are significantly better defenders and they work better with pitchers. Campusano logged a 122 wRC+ as a 22-year-old catcher at Triple-A, which is pretty excellent. He hit 15 home runs while batting .295 with a 20.2 K% and an 8.3 BB% in 81 games. His defense is supposedly trending up, but that might be damning with faint praise. If it ever seems like Campusano is poised for regular work, he's a talented enough hitter to add value in two-catcher leagues. The Padres traded for Jorge Alfaro in November, adding another competitor for playing time to the mix.
Despite entering 2020 having never played above High-A ball, Campusano parlayed a co-MVP campaign in the California League in 2019 and an impressive showing at the team's alternate training site last season into a big-league callup. The 22-year-old logged only four plate appearances before a sprained wrist shut him down for the remainder of the regular season, but he made the most of the brief opportunity, drilling a solo home run in his debut. He also struck out twice, providing a reminder that young catching prospects usually take time to develop. Still, Campusano has shown the ability to hit for contact in the minors -- he registered a superb 11.7 K% and 86.5 Contact% in his breakthrough 2019 season -- and he projects to be an above-average hitter in the big leagues. Unfortunately, offseason legal troubles have cast a cloud over his immediate future and scrambled his outlook moving forward.
Campusano, a second-round pick in 2017, had a breakout season at High-A, and while he clearly has a good command of the strike zone (10.7 BB%, 11.7 K%), his numbers are slightly less impressive when we look a little deeper. He hit .292 with nine home runs in 107 games away from Lancaster, one of the most hitter-friendly parks in pro baseball (he hit .423 with six HR in 15 games in Lancaster). His numbers in primarily neutral hitting environments are a better gauge of his present abilities -- a potentially above-average to plus hitter with average power. He has the tools to be a quality defensive catcher, thus profiling as the Padres' long-term starter at that position. We can recognize the noise in his California League numbers and still conclude that he is a top-10 catching prospect, just not a top-five one. He will spend his age-21 season at Double-A, which by itself is an accomplishment for any catcher.
More Fantasy News