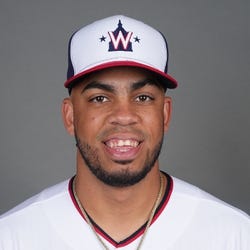 2022 Stats
AVG
.275
HR
7
RBI
45
R
29
SB
3
2023 Projections
AVG
HR
RBI
R
SB
Unlock Our Projections
2023 Fantasy Outlook
Garcia opened 2022 with Triple-A Rochester but was promoted to the big leagues at the start of June and had a .275/.295/.408 slash line with seven home runs across 93 games for the Nationals. He initially took over the starting job at shortstop but shifted to the keystone once CJ Abrams was deemed ready to go. Garcia had a manageable strikeout rate (22.3 percent), but an abysmal walk rate (3.0 percent) isn't sustainable for a big-league regular. Garcia should receive plenty of run in 2023 with the Nationals trying to determine what the young infielder can provide, but he'll need to show more than solid contact skills to warrant a regular role long term. He also has only eight steals since the 2019 minor-league season, so he won't provide much value on the basepaths in addition to his low power. Read Past Outlooks
read more
RANKS
#314
ADP
#

* Exit Velocity and Barrels/PA % are benchmarked against 2019 data (min 400 PA) and Hard Hit Rate is benchmarked against last season's data (min 400 PA). See here for more exit velocity/barrels stats plus an explanation of current limitations with that data set.
BB/K
0.13
BB Rate
2.9%
K Rate
22.3%
BABIP
.337
ISO
.133
AVG
.275
OBP
.295
SLG
.408
OPS
.704
wOBA
.305
Exit Velocity
87.3 mph
Hard Hit Rate
31.0%
Barrels/PA
5.6%
Expected BA
.260
Expected SLG
.409
Sprint Speed
23.7 ft/sec
Ground Ball %
51.3%
Line Drive %
22.2%
Fly Ball %
26.5%
Prospect Rankings History
View Complete Luis Garcia Prospect Ranking History
Advanced Batting Stats
Loading Advanced Batting Stats...
Additional Stats
Games By Position
Defensive Stats
Loading Games Played by Position...
Loading MLB Defensive Stats...
Batted Ball Stats
Loading Batted Ball Stats...
Stats Vs Upcoming Pitchers
Want more matchup stats?
View Luis Garcia vs. Pitcher Stats
Loading Matchup Stats...
Nationals Depth Chart
Our full team depth charts are reserved for RotoWire subscribers.
Subscribe Now
Recent RotoWire Articles Featuring Luis Garcia See More
MLB Roundtable Rankings: 2023 Fantasy Baseball Top 300
Yesterday
Yesterday
From Trea Turner to Spencer Torkelson, RotoWire's Roundtable Rankings crew offers their combined top 300 fantasy baseball rankings.
Fantasy Impact of 2023 Rules Changes
3 days ago
3 days ago
Shane Bieber will face fewer AL Central teams this season due to changes in the schedule. We look at the new rule changes and who is affected by them in this article.
Collette Calls: Value in the Scrap Heap for 2023
23 days ago
23 days ago
Jason Collette's annual overview of overlooked players includes Eduardo Rodriguez, who shouldn't be forgotten about despite a poor first season in Detroit.
Past Fantasy Outlooks
2021
2020
2019
2018
Garcia hadn't yet conquered Double-A, let alone Triple-A, hitting just .257/.280/.337 at that level in 2019, but an injury crisis called him up to the majors early in the 2020 season. He was hardly a star, or even an average regular, but given the context, his respectable .276/.302/.366 slash line was quite impressive. His 83.5 mph average exit velocity and 3.6 BB% both fell in the bottom three percent of qualified hitters, but he did at least make a decent amount of contact, striking out at a 20.9% clip, and again, there was no reason to expect he wouldn't struggle. It's tough to call him big-league ready even after spending most of a season in the majors, however, especially as his defense graded out quite poorly at second base. He could use a fair bit more seasoning in the minors, but even if he gets more major-league chances, he's unlikely to provide much fantasy value outside of a decent average.
Garcia gets an A+ for age/level and a D- for statistical output at Double-A. He would have been the youngest hitter at High-A and was 15 months younger than the next youngest hitter at Double-A. He has the size (6-foot-2, 190 pounds) to grow into 20-plus-homer pop, but his swing is so contact-oriented (50.0 GB%, 38.0 Oppo%, 13.9 Hard%) that he will need to adjust his launch angle to get there. His elite bat-to-ball skills have led to him swinging at too many pitchers' pitches. Being a bit more picky early in the count in order to get better pitches to hit could go a long way. Including the Arizona Fall League, Garcia hit .287/.325/.431 with three home runs, six steals and a 33:13 K:BB in 53 games from August on, so he improved and finished strong. If everything clicks, he could go 20/10 while contending for batting titles in his prime. We probably won't see him in the majors until 2021.
Among qualified hitters, only Mookie Betts, Christian Yelich and Mike Trout hit .300 with 20 home runs and 15 steals last year. Garcia could eventually hit those baselines. He was 3.3 years younger and 11% better than the average hitter in the Sally League and 4.4 years younger and 12% better than the average hitter in the Carolina League. It may not seem like much, but his .113 ISO at High-A was a very positive indicator, given his age, hit tool (.297 AVG at Low-A was a career low) and contact skills (14.9 K% at High-A). Up-the-middle players simply don't have full-season debuts like that in their age-17/18 campaigns. Garcia has pedigree ($1.3 million bonus on July 2, 2016) and at 6-foot, 190 pounds, more power is coming. The one knock on him as a hitter: his splits against same-handed pitching (.330 AVG, .843 OPS against RHP, .234 AVG, .537 OPS against LHP). He may eventually move to second base, but that won't negatively affect his fantasy value.
Even without Braves or Padres-level exposure, the Nationals cleaned up on the 2016 international market -- inking a pair of shortstop prospects in Garcia and Yasel Antuna, both of whom have increased their stock significantly since signing. Antuna is more appealing for dynasty leagues because of his monstrous ceiling, but Garcia has the higher floor, and with plus-plus speed, his fantasy upside should not be overlooked. He was the fourth youngest hitter in the Gulf Coast League, yet finished 11th in batting average (.302) and tied for ninth in steals (11-for-13). Unlike Antuna, Garcia is a good bet to stick at shortstop, so at the very least he projects to hit for a high average, steal a lot of bases and quality at the second scarcest position in the game. His all-fields approach (36 percent to the pull side, 38.5 percent to the opposite field) allows him show off his hit tool, but it mutes any power potential. At 6-foot, 190 pounds, he could access over-the-fence power, but it would likely come at the expense of his batting average.
More Fantasy News