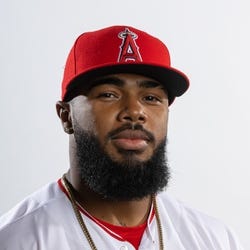 2022 Stats
AVG
.264
HR
17
RBI
52
R
45
SB
6
2023 Projections
AVG
HR
RBI
R
SB
Unlock Our Projections
2023 Fantasy Outlook
Talk about making the most of one's opportunities! Rengifo went from someone projected to filling a utility role to inheriting a starting position as the Angels roster fell apart and having one of the more surprising seasons for waiver wire fodder. He had 14 homers and 13 steals between Triple-A and the majors in 202, but previous exposure to MLB pitching gave us little reason to believe he would finish the 2022 season with 17 homers while finishing fourth on the club in homers. The impatient hitter looks for fastballs early and often and 10 of his 17 homers came off such pitches last season. He walks almost by accident which limits his on-base opportunites and thus capped his stolen base chances last season. The skills profile needs the volume to produce the results because his ability to avoid strikeouts is his one outstanding offensive skill as nearly everything else grades out below average. The normal worries of a regression in homers do not really apply here as the GB/FB rateand the HR/FB rates in 2022 are mirror images to what he did in 2021 in more limited playing time. A healthy Anthony Rendon (it can happen!) pushes Rengifo back to second base but he retains his dual-eligibility heading into the season with an additional shortstop qualification if your league has a 10-game threshold. Read Past Outlooks
read more
RANKSFrom Preseason
#

* Exit Velocity and Barrels/PA % are benchmarked against 2019 data (min 400 PA) and Hard Hit Rate is benchmarked against last season's data (min 400 PA). See here for more exit velocity/barrels stats plus an explanation of current limitations with that data set.
BB/K
0.22
BB Rate
3.3%
K Rate
15.5%
BABIP
.285
ISO
.166
AVG
.264
OBP
.294
SLG
.429
OPS
.724
wOBA
.316
Exit Velocity
86.9 mph
Hard Hit Rate
23.8%
Barrels/PA
4.3%
Expected BA
.254
Expected SLG
.392
Sprint Speed
23.9 ft/sec
Ground Ball %
47.2%
Line Drive %
17.8%
Fly Ball %
35.0%
Prospect Rankings History
View Complete Luis Rengifo Prospect Ranking History
Advanced Batting Stats
Loading Advanced Batting Stats...
Additional Stats
Games By Position
Defensive Stats
Loading Games Played by Position...
Loading MLB Defensive Stats...
Batted Ball Stats
Loading Batted Ball Stats...
Stats Vs Upcoming Pitchers
Want more matchup stats?
View Luis Rengifo vs. Pitcher Stats
Loading Matchup Stats...
Angels Depth Chart
Our full team depth charts are reserved for RotoWire subscribers.
Subscribe Now
Recent RotoWire Articles Featuring Luis Rengifo
2023 Fantasy Baseball Rankings - Way Too Early Top 300 Draft Ranks
44 days ago
44 days ago
James Anderson provides a way too early top 300 rankings for those who have the itch to start drafting for 2023.
Collette Calls: Hitting Bold Predictions Reviews
52 days ago
52 days ago
Jason Collette looks back at his bold predictions from last offseason, examining what went right and what went wrong.
Yahoo DFS Baseball: Wednesday Picks
59 days ago
59 days ago
It’s the final day of the regular season, and Mike Barner has your picks for a loaded slate.
DraftKings MLB: Tuesday Breakdown
60 days ago
60 days ago
Dan Marcus focuses on the last Tuesday slate of the regular season, making his recommendations to help lead you to DFS success.
Yahoo DFS Baseball: Saturday Picks
63 days ago
63 days ago
Chris Morgan is picking plenty of offense from the Angels-Rangers matchup.
Past Fantasy Outlooks
2021
2020
2019
Rengifo was said to be traded to the Dodgers along with Andy Pages in exchange for Joc Pederson, but Angels owner Arte Moreno nixed the deal. That was just the beginning of a tumultuous 2020 for Rengifo. He was placed on the IL in early July for undisclosed reasons and then battled hamstring tightness later in the month, costing him a spot on the Opening Day roster. His season was bookended by more hamstring trouble, and Rengifo also battled a thumb sprain in September. In 106 PA around all the injuries, Rengifo was awful and even demoted at one point due to poor performance. There are some glimmers of light including a 13.4 BB% and three steals on four attempts. Rengifo was also playing in the Dominican Winter League, so he's ostensibly healthy again. Jose Iglesias was brought in this winter to play shortstop, which leaves Rengifo to likely fill a utility role to begin 2021.
Rengifo played most of the season at the big-league level before a hamate injury ended his season. The impressive thing for Rengifo is that he played the season as a 22-year-old, so we can somewhat forgive his below-average production. Throughout the minors, he was a high-contact hitter who was willing to accept his walks and take bases when opportunities presented themselves. Last year, he was still able to get on base at a decent clip even though he struggled to hit for average adjusting to major-league pitching. The switch hitter has the athleticism to play both second and short as he did last year, but only qualifies at his true home (second base) on draft day. We can see Rengifo hitting for a better average in 2020, but the fact he was thrown out stealing in five of his seven attempts last year is going to make it tough to project a spike in steals, and he faces more obstacles to playing time now following a trade to the Dodgers.
Future utility players do not typically climb from High-A to Double-A to Triple-A at 21 while being above league average at every stop. Yet, many evaluators still see Rengifo as a high-end utility player due to his glove fitting best at second base and doubts about his ability to make enough impact offensively to profile there. It would be a mistake to close the book on him being a valuable fantasy asset for several reasons. His 75:75 K:BB in 590 PA suggests he has a high batting average floor and high OBP ceiling. While not a true plus runner, Rengifo's instincts are so good that he was able to swipe 41 bags on 57 attempts. Even if we dial back the attempts, he could steal 20 bases in the majors. If the switch hitter's hit tool turns out to be as good as he showed at High-A and Double-A, he could be a leadoff hitter with sneaky pop. He might already be better than the big-league options at the keystone, so we should see him this summer.
More Fantasy News