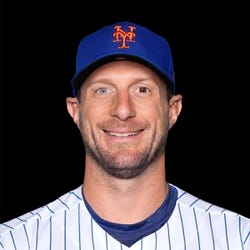 2022 Stats
W-L
11-5
ERA
2.29
WHIP
0.91
K
173
SV
0
2023 Projections
W-L
ERA
WHIP
K
SV
Unlock Our Projections
2023 Fantasy Outlook
A pair of oblique issues limited Scherzer to only 23 starts in his inaugural season with the Mets. The veteran right-hander spent almost seven weeks on the IL in the first half, then lost two more weeks in September. His strikeout rate dipped a tad to a still dominant 30.6% while his 4.2% walk rate was its lowest since 2015. Scherzer took advantage of pitching in cavernous Citi Field to drop his homers to .81 HR/9, the lowest since 2014. Scherzer's four-seam velocity continued a slightly downward trend, but it's not enough to be concerned about. Scherzer enjoyed another outstanding season, where his 2.46 ERA marked the eighth time in the last 10 years his ERA was sub-3.00. Even so, Scherzer will be remembered most for struggling in his last two starts, one to end the regular season and the other in the wild card round. This may drop his price to the point the durability risk is worth the reliability reward. Read Past Outlooks
read more
RANKSFrom Preseason
#