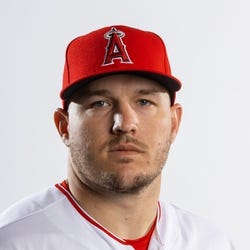 2022 Stats
AVG
.283
HR
40
RBI
80
R
85
SB
1
2023 Projections
AVG
HR
RBI
R
SB
Unlock Our Projections
2023 Fantasy Outlook
Despite missing 43 games, Trout smacked an even 40 homers in 2022, tying Pete Alonso for third in baseball. The missed time was the result of a rare back condition called costovertebral dysfunction, but he returned to hit 16 of those aforementioned 40 homers in his final 40 games (.308/.370/.686 in that span). Running seems to be a thing of the past as Trout attempted just one steal last season and has a total of four stolen bases over the past three seasons, but there's no doubt the hitting skills are still elite. Eliminate running from the equation and the only variable is health; we should realistically bake in roughly a month of missed time, but Trout can do more in 130 games than most can contribute over a 150-game season. He's headed to the Hall of Fame one day and Trout is still a ways from his twilight years. Read Past Outlooks
read more
RANKS
#