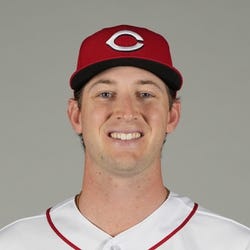 2022 Stats
W-L
4-7
ERA
3.66
WHIP
1.25
K
131
SV
0
2023 Projections
W-L
ERA
WHIP
K
SV
Unlock Our Projections
2023 Fantasy Outlook
The seventh overall pick in 2019, Lodolo is already paying dividends for Cincinnati. He began the 2022 season as the Reds' No. 5 starter but made just three starts before a back issue cropped up that would ultimately sidelined the lefty well beyond the initial estimated timetable. Once finally back, Lodolo pitched like a star in the making, posting a 2.92 ERA, 1.06 WHIP and 21.3 K-BB% in 77 innings after the All-Star break. Lodolo sits around 94 mph with his fastball variations and can break off a nasty curveball to put hitters away. Hunter Greene gets most of the attention in the Reds' rotation, but Lodolo is arguably better equipped for major-league success right now given his secondary pitches and command of his arsenal. Read Past Outlooks
read more
RANKSFrom Preseason
#

* Exit Velocity, Barrels/BBE %, Balls Hit 95+ MPH %, and Spin Rate are benchmarked against 2019 data (min 120 IP). See here for more exit velocity/barrels stats plus an explanation of current limitations with that data set.
K/BB
3.36
K/9
11.4
BB/9
3.4
HR/9
1.1
Fastball
94.3 mph
ERA
3.66
WHIP
1.25
BABIP
.324
GB/FB
1.57
Left On Base
76.7%
Exit Velocity
81.0 mph
Barrels/BBE
6.1%
Spin Rate
2387 rpm
Balls Hit 95+ MPH
22.5%
Swinging Strike
12.7%
Prospect Rankings History
View Complete Nick Lodolo Prospect Ranking History
Advanced Pitching Stats
Loading Advanced Pitching Stats...
Defensive Stats
Loading MLB Defensive Stats...
Stats Vs Today's Lineup
Want more matchup stats?
View Nick Lodolo vs. Batter Stats
Loading Matchup Stats...
Reds Depth Chart
Our full team depth charts are reserved for RotoWire subscribers.
Subscribe Now
Recent RotoWire Articles Featuring Nick Lodolo
2023 Fantasy Baseball Rankings - Way Too Early Top 300 Draft Ranks
44 days ago
44 days ago
James Anderson provides a way too early top 300 rankings for those who have the itch to start drafting for 2023.
NFBC Main Event: Season in Review & Lessons Learned
56 days ago
56 days ago
Ryan Rufe looks back on both his successes and his struggles in his first season in the NFBC Main Event.
NFBC Main Event: Fever Dream, Chapter 5
58 days ago
58 days ago
Ryan Rufe walks us through the final few weeks of his first foray into the NFBC Main Event.
Collette Calls: Scoring Tweaks
64 days ago
64 days ago
Jason Collette advocates for more experimentation with scoring setups in order to give fantasy relevance to a larger pool of pitchers.
Mound Musings: The “Kids on Parade” Watch List for 2023
65 days ago
65 days ago
As the MLB regular season draws to its conclusion, Brad Johnson presents his Kids on Parade list, and at the top sits Grayson Rodriguez, the Orioles' star prospect.
Past Fantasy Outlooks
2022
2021
2020
Reports of Lodolo struggling at the alternate training site threw us off the scent, but he showed in 2021 that he can still make good on his potential as a mid-rotation starter, perhaps sooner than later. The lanky 6-foot-6 lefty logged a 2.31 ERA, 0.97 WHIP, a 78:11 K:BB and a groundball rate over 54% in 50.2 innings across 13 starts (11 at Double-A, two at Triple-A). A blister knocked him out of action for four weeks early in the summer and a shoulder strain ended his season in August, so Lodolo was unable to build up his innings to a satisfactory level in his first full season in the minors. In many ways, Lodolo is the antithesis of org. mate Hunter Greene, as he lacks high-octane stuff, but he has excellent command of four average or better pitches. His upper-80s slider and low-to-mid-90s sinker are his bread and butter offerings, enabling him to miss enough bats while generating weak contact. The Reds have already made it clear that Lodolo will get to compete for a rotation spot this spring. Barring some big trades after the lockout, he will likely head back to Triple-A, but chances are he will make more appearances in the majors than in the minors.
The consensus top college starter in a very weak 2019 pitching class, Lodolo was seen as more floor than ceiling, already possessing three average or better pitches and potentially plus command. At 6-foot-6, 205 pounds, he was also seen as projectable by college hurler standards. When the Driveline crew took over Reds pitching development, it seemed that projection might become a reality, but so far that has not been the case. Reports from the Reds' alternate training site weren't very promising, as he didn't show up in tip top baseball shape and his fastball was quite hittable as a result. The lanky lefty has typically sat in the low-90s, which means he really needs to spot his pitches against advanced hitters. His curveball has plus potential, but his changeup and fastball lag behind. There is still a chance his stuff will tick up, and it will need to if he is to develop into more than a No. 4 starter.
Despite being the consensus top pitcher heading into the 2019 draft, Lodolo was seen as more floor than ceiling -- a "safe" college arm. After striking out 30 and walking none in an 18.1-inning pro debut across the Pioneer League and Midwest League, it's fair to wonder if the 6-foot-6 southpaw out of TCU offers a bit more upside than initially believed. Lodolo pairs a low-90s fastball with two above-average secondaries (slider, changeup). He was already a candidate for added velocity, given his wiry frame and good mechanics, and with the Reds hiring Kyle Boddy of Driveline Baseball as pitching coordinator, Lodolo adding a tick or two to his fastball seems more likely than not. By the time he reaches the majors, Lodolo could have three plus pitches and plus command, which would make him a No. 2 starter. He is on track to spend most of his first full season in the upper levels, setting up a 2021 MLB debut.
More Fantasy News