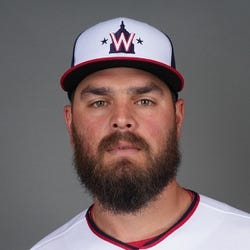 * Exit Velocity, Barrels/BBE %, Balls Hit 95+ MPH %, and Spin Rate are benchmarked against 2019 data (min 30 IP). See here for more exit velocity/barrels stats plus an explanation of current limitations with that data set.
K/BB
2.77
K/9
10.8
BB/9
3.9
HR/9
1.5
Fastball
97.0 mph
ERA
3.30
WHIP
1.30
BABIP
.302
GB/FB
0.63
Left On Base
71.9%
Exit Velocity
81.2 mph
Barrels/BBE
2.7%
Spin Rate
2405 rpm
Balls Hit 95+ MPH
17.7%
Swinging Strike
16.5%
Advanced Pitching Stats
Loading Advanced Pitching Stats...
Defensive Stats
Loading MLB Defensive Stats...
Stats Vs Today's Lineup
Want more matchup stats?
View Tanner Rainey vs. Batter Stats
Loading Matchup Stats...
Nationals Depth Chart
Our full team depth charts are reserved for RotoWire subscribers.
Subscribe Now
Recent RotoWire Articles Featuring Tanner Rainey See More
Closer Encounters: 2022 Saves in Review, Part 2
107 days ago
107 days ago
Ryan Rufe recaps the saves landscape in this year's NFBC Main Event and shares his own hits and misses from this past season.
Closer Encounters: 2022 Saves in Review, Part 1
113 days ago
113 days ago
Ryan Rufe recaps this past season's saves landscape. Just how many teams preferred closer committees over the conventional approach?
Past Fantasy Outlooks
2022
2021
2020
2019
Rainey endured a brutal 2021 campaign from both a health and performance standpoint. He missed time due to injuries to his collarbone, side and tibia, as well as COVID-19 protocols. He struggled mightily when healthy, posting a 7.62 ERA and 1.81 WHIP across 32 relief appearances before he was optioned to the minors in mid-August. His performance was much better in Triple-A, where he ripped off several scoreless outings in a row before Washington summoned him again in early September. Upon his return, Rainey entered the mix for saves with Kyle Finnegan struggling down the stretch. He logged the first three saves of his career along with a career-high 10 holds despite finishing the season with abhorrent ratios (7.39 ERA, 1.71 WHIP, 7.1 BB/9). One positive to come out of 2021 is the experience Rainey gained closing out games, but his continued issues with homers and walks limit his upside.
If you fancy high-risk and high-reward relief pitchers, Rainey is your man. He throws a lively, upper-90s fastball with a biting slider and has used that combination to strike out 33.8% of the hitters he has faced in the majors in just over 75 innings of work. The league has hit .080 off his slider over the past two seasons while it has generated 55 strikeouts for him. The other side of the ledger shows Rainey has also walked 57 batters, hit five more and allowed 14 home runs in that same timeframe. There is also the matter of the sore forearm which prematurely ended his 2020 season. All that said, he enters 2021 as a top candidate to close for the Nationals despite zero career saves with a golden opportunity to significantly improve his fantasy value. There is upside here if were to get the job, but he could also lose it within two weeks due to injury or continued issues with homers and walks.
Armed with a blazing fastball that can hit triple digits and a plus slider that registers plenty of swings-and-misses, Rainey stormed onto the scene with a 34.6 K% in his first season with the Nationals. The gaudy strikeout total was accompanied by a less-impressive 3.91 ERA (4.37 FIP) largely due to the right-hander's struggles with his command. Rainey's 17.8 BB% ranked dead last in the league among pitchers who threw 40 or more innings and wasn't far off from the elevated rates he has surrendered in the minors. Whether Rainey can tame his control issues to a tolerable level could ultimately determine his future role in the big leagues. His fastball-slider combination certainly resembles that of a closer, and last season's .194 xBA emphasizes how dominant Rainey has the potential to be. He isn't ready for a ninth-inning role just yet, but he could be groomed for that responsibility in the near future.
Why would the Nationals trade an established starter in Tanner Roark to the Reds for a guy who allowed 19 runs in his first seven MLB innings? For one thing, Rainey can rush it up there in triple-digit fashion though he needs significant improvement in the control department. Rainey posted an impressive 2.65 ERA and 1.18 WHIP for Triple-A Louisville, fanning 65 in 51 innings, albeit with 35 free passes. Aside from honing control, Rainey needs to develop an offspeed offering. He throws a slider and change, but both are within 10 mph of his heater, making it easier to sit dead red. While Rainey has late-inning potential, he'll first have to earn a spot in the Nationals' restocked bullpen, starting out in low-leverage scenarios. Monitor his walk rate in the spring and early part of the season. If he can exhibit better control, he'll quickly ascend the ladder.
More Fantasy News