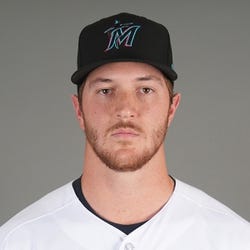 Out
Injury Lat
Est. Return 2/1/2023
2022 Stats
W-L
4-11
ERA
5.47
WHIP
1.50
K
106
SV
0
2023 Projections
W-L
ERA
WHIP
K
SV
Unlock Our Projections
2023 Fantasy Outlook
What...was...that? Rogers was one of the more wide awake sleepers heading into the 2022 draft season who many targeted in the late rounds after watching his growth in 2021 only to watch him aggressively backslide statistically in 2022 in many areas. His K-BB% dropped 40% while he specialized in filling the basepaths either by hits (.278) or walk rate (9%) and the first half splits were as poor as the second half splits. He allowed just 1 homer and a .194 average to lefties on the seasons while righties sprinted to the bat rack to hit 14 homers off him with a .298 average. Over three seasons, he has 14 quality starts in 55 career starts (25% rate) showing the risks with taking his upside too early in a draft. We cannot pretend 2021 is the real deal when 2020 and 2022 happened as well because the both sample sizes happened in nearly the same amount of innings. The biggest difference in the two samples was how well his fastball performed in 2021 when he most pitched up in the count (.222 avg; .334 SLG) vs 2022 when he was behind too often (.312 avg; .553 SLG.) Read Past Outlooks
read more
RANKS
#

* Exit Velocity, Barrels/BBE %, Balls Hit 95+ MPH %, and Spin Rate are benchmarked against 2019 data (min 120 IP). See here for more exit velocity/barrels stats plus an explanation of current limitations with that data set.
K/BB
2.36
K/9
8.9
BB/9
3.8
HR/9
1.3
Fastball
94.6 mph
ERA
5.47
WHIP
1.50
BABIP
.340
GB/FB
1.34
Left On Base
65.7%
Exit Velocity
81.8 mph
Barrels/BBE
5.5%
Spin Rate
2049 rpm
Balls Hit 95+ MPH
22.9%
Swinging Strike
11.6%
Prospect Rankings History
View Complete Trevor Rogers Prospect Ranking History
Advanced Pitching Stats
Loading Advanced Pitching Stats...
Defensive Stats
Loading MLB Defensive Stats...
Stats Vs Today's Lineup
Want more matchup stats?
View Trevor Rogers vs. Batter Stats
Loading Matchup Stats...
Marlins Depth Chart
Our full team depth charts are reserved for RotoWire subscribers.
Subscribe Now
Recent RotoWire Articles Featuring Trevor Rogers
2023 Fantasy Baseball Rankings - Way Too Early Top 300 Draft Ranks
50 days ago
50 days ago
James Anderson provides a way too early top 300 rankings for those who have the itch to start drafting for 2023.
NL FAAB Factor: Waiver Pickups of the Week
75 days ago
75 days ago
Pitching remains Jan Levine's focus for the final week of September.
Mound Musings: The 2022 Pitching Awards Issue
78 days ago
78 days ago
Brad Johnson reveals his 2022 Pitching Awards, with Dylan Cease earning Pitcher of the Year honors.
Fantasy Baseball Injury Report: Juli-Oh No
80 days ago
80 days ago
Jeff Stotts looks at some key injury situations in the waning days of the regular season, including back woes for Mariners rookie phenom Julio Rodriguez.
Weekly Pitcher Rankings: Cease Tops a Busy Week
83 days ago
83 days ago
Two-start pitchers fill eight of the top nine spots in Todd Zola's weekly pitcher rankings, but Jacob deGrom earns a spot near the top despite being scheduled for just one start.
Past Fantasy Outlooks
2022
2021
2018
Ugly 2020 surface stats masked interesting skills and made Rogers a sleeper pick for many heading into the 2021 season. Those who took the chance were handsomely rewarded. Rogers posted a sparkling 2.64 ERA over 25 starts, and his 28.5 K% was backed up by a 14.1 SwStr% (12th in MLB, min. 120 innings). The lefty comfortably sits in the mid-90s with his four-seam fastball and pulls the string on his changeup about a quarter of the time. The league flailed at the change, batting a combined .193 with one homer and 47 strikeouts against the pitch. His third offering -- the slider -- had a whiff rate north of 40%, per Statcast, and further development of that pitch could propel Rogers toward the top of the SP rankings. Even as is, he's more than capable as a starter, and the cozy confines of Marlins Park help his cause. Thankfully the "sleeper" label still sort of applies despite the breakout already happening.
Rogers' 6.11 ERA wasn't pretty, but he still shot up prospect lists thanks to increased fastball velocity and an improved slider that helped lead to a 30.0 K%. He used to sit 90-93 mph with his high-spin fourseamer, but it averaged 94 mph while touching 96 mph last season. Rogers' slider improved from below-average to average, and his changeup, which drops off the table, has all the traits of a future plus offering. The 6-foot-6 southpaw's 3.49 xERA and 3.67 xFIP portend better results with normal luck, but he can also improve skills wise. His 10.0 BB% was the highest mark of his career, which is understandable for a 22-year-old jumping over Triple-A completely. He should be able to improve his command and control going forward. Despite being a first-round pick in 2017, Rogers doesn't come with a ton of prospect hype, and his bloated 2020 ERA allows for him to be available in the mixed-league end game.
Considering Rogers was selected with the No. 13 pick in the 2017 draft and received a $3.4 million bonus, it's tempting to try to make an argument for him being a valuable dynasty-league asset. However, he is old for his class, and is essentially a two-pitch lefty at the moment. He did not pitch at all after being drafted, which is slightly concerning as the Marlins' first-round pick from 2016, Braxton Garrett, didn't pitch after being drafted and then needed Tommy John surgery early on the following season. Rogers is not as well-rounded as Garrett, but the 6-foot-6 southpaw has a plus fastball and a slider that shows signs of being an out pitch. His changeup and curveball lag well behind as distant third and fourth pitches, so it's easy to see why some evaluators project him to end up in the bullpen. He lacks frontline upside, and is forever away from the majors, so he can be ignored for now in dynasty leagues where fewer than 200 prospects are rostered.
More Fantasy News