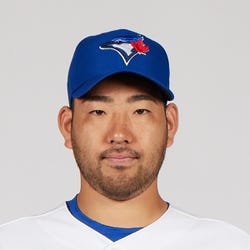 2022 Stats
W-L
6-7
ERA
5.19
WHIP
1.50
K
124
SV
1
2023 Projections
W-L
ERA
WHIP
K
SV
Unlock Our Projections
2023 Fantasy Outlook
Kikuchi is at a career crossroads as his non COVID-shortened seasons look terrible by most measures. His ERA and ERA estimators have been messy in each of those seasons, and then he further compounded problems in 2022 with a noticeable spike in his walk rate with a healthy dose of homers. Just six pitchers have ever thrown at least 100 innings with walk rates of at least 12% while allowing 2 homers per nine innings as Kikuchi did and those names include Oliver Perez, Andy Benes, and Derek Holland and each of their ERAs were over a full run higher than what Kikuchi somehow pulled off last season at 5.19. The strikeout rate was am impressive as he ran away from his cutter and threw more fastballs, but only his changeup was tough to hit for the league. It is perplexing to see someone with such poor overall numbers to have four pitches with Whiff rates above 25%, but that is what Kikuchi pulled off last season. Perhaps there is a brighter future for him in relief where he can pump up the velocity in shorter stints because he has had issues sustaining that over the course of a season. Funny data point: did you know Kikuchi's four-seam fastball generated more swings and misses in 2022 than four-seamers thrown by Justin Verlander and Alek Manoah? Now you do. Read Past Outlooks
read more
RANKS
#558
ADP
#

* Exit Velocity, Barrels/BBE %, Balls Hit 95+ MPH %, and Spin Rate are benchmarked against 2019 data (min 120 IP). See here for more exit velocity/barrels stats plus an explanation of current limitations with that data set.
K/BB
2.14
K/9
11.1
BB/9
5.2
HR/9
2.1
Fastball
95.0 mph
ERA
5.19
WHIP
1.50
BABIP
.305
GB/FB
1.51
Left On Base
70.7%
Exit Velocity
83.1 mph
Barrels/BBE
6.9%
Spin Rate
2215 rpm
Balls Hit 95+ MPH
27.3%
Swinging Strike
13.8%
Prospect Rankings History
View Complete Yusei Kikuchi Prospect Ranking History
Advanced Pitching Stats
Loading Advanced Pitching Stats...
Defensive Stats
Loading MLB Defensive Stats...
Stats Vs Today's Lineup
Want more matchup stats?
View Yusei Kikuchi vs. Batter Stats
Loading Matchup Stats...
Blue Jays Depth Chart
Our full team depth charts are reserved for RotoWire subscribers.
Subscribe Now
Recent RotoWire Articles Featuring Yusei Kikuchi See More
Todd's Takes: Putting a Bow on the Moves
7 days ago
7 days ago
Todd Zola tackles the remainder of the winter's most fantasy-relevant moves, including the swap which sent Pablo Lopez to Minnesota and Luis Arraez to Miami.
MLB: Postseason Cheat Sheet and Strategy
118 days ago
118 days ago
Todd Zola tackles the MLB Postseason Cheat Sheet for RotoWire and discusses his approach to postseason leagues this year.
Weekly Pitcher Rankings: Decisions, Decisions
123 days ago
123 days ago
Todd Zola ranks starting pitchers ahead of a short week in which workloads are full of uncertainty.
Weekly Pitcher Rankings: Patience is a Virtue
144 days ago
144 days ago
Todd Zola ranks this week's starting pitchers, with the widely-available Bailey Falter's two-start week earning him a top-30 spot.
Todd's Takes: Arsenals and Angles
153 days ago
153 days ago
Todd Zola analyzes pitchers with limited arsenals before tackling the most interesting fantasy fall-out from Wednesday's schedule.
Past Fantasy Outlooks
2022
2021
2020
2019
2016
Kikuchi appeared set to deliver the breakout campaign that many projected prior to the 2021 season, maintaining a 3.46 ERA with an 81:26 K:BB across his first 80.2 innings and 13 starts. However, he crumbled from there, posting a 5.42 ERA across his last 16 outings. Perhaps coincidentally, his problems began with the crackdown on the use of foreign substances. When viewing Kikuchi's profile as a whole, home runs remain a significant problem (1.6 HR/9) and his walk rate also remains higher than would be desirable (9.3 BB%). However, by far the biggest problem for Kikuchi is the amount of hard contact he surrenders, highlighted by an 11% barrel rate, 47% hard hit rate, and 91.9 mph average exit velocity. Kikuchi agreed to a three-year, $36 million deal with the Blue Jays and will be pitching in the AL East for the foreseeable future.
On the surface, Kikuchi has had some rough sledding in his transition from pitching in Japan to pitching in the majors. Two consecutive season of bad ratios and a lack of wins while pitching for a perpetually rebuilding Seattle franchise. If you solely focus on the surface stats, you will miss the progress he is making as a pitcher. The southpaw added a new cutter in 2020 and made it his primary pitch, but like with anything new, it took some time getting used to. Kikuchi struggled with walks, but still struck out nearly a quarter of the hitters he faced and his expected stats do not look like they belong to a guy coming off a 5.17 ERA and 1.30 WHIP season. The cutter helped him greatly against righties as their weighted on-base average against him dropped 75 points year over year. Seattle is not a great team, but Kikuchi is a good pitcher whose surface stats create a strong buying opportunity in 2021.
Kikuchi fell far short of expectations in his first major-league season, posting a 5.46 ERA and 1.52 WHIP after recording a 2.50 ERA and 1.05 WHIP over three seasons in Japan. The 28-year-old struggled to miss bats, posting a 16.1 K% that would have ranked fourth worst among major-league starters had he logged enough innings to qualify, along with a middling 8.8% swinging-strike rate. The Mariners took measures to limit Kikuchi's workload as he adjusted to the rigors of the MLB schedule. The southpaw served up a whopping 36 home runs despite throwing only 161.2 frames, with right-handed batters teeing off to the tune of .304/.359/.545 against Kikuchi. He figures to have a rotation spot on a rebuilding Mariners club, but there is little reason to think a big improvement is coming in his second big-league season. Throw your dart elsewhere.
A three-time All-Star in Japan (2013, 2017, 2018), Kikuchi was 14-4 with a 3.08 ERA, an 8.4 K/9 and a 2.5 BB/9 in 2018. He has a mid-90s fastball that he uses to set up a plus slider. While not regarded in quite the same star tier of Shohei Ohtani or Yu Darvish, the 27-year-old lefty still projects as at least a solid mid-rotation starter in MLB. Kikuchi signed a three-year, $43 million deal with the Mariners, with a $13 million player option for a fourth year and a team option for a four-year, $66 million extension after the first three years. He was dominant in 2017, logging 217 strikeouts in 187.2 innings -- both career highs. Kikuchi was similarly dominant in 2018 until a shoulder injury caused him to miss a month, and while he was able to return, he wasn't quite the same after that. He will be adapting to a new schedule where he'll pitch more frequently, so we should not expect the 6-foot hurler to log more than 160 innings on a rebuilding Mariners team.
Kikuchi attracted attention as a high schooler for his hard fastball and stated desire to forego a pro career in Japan and jump straight to the majors. That didn't happen, and injuries have so far deterred him from reaching his potential. Still only 24, Kikuchi showed signs of improvement in 2015 and if he can put together a couple of healthy seasons, he could establish himself as a quality lefty.
More Fantasy News