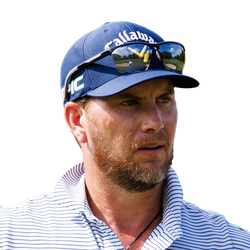 2022–23 Stats
Rank
106
Winnings
$318,864
Winnings/Entry
$63,773
Entries
5
Rounds
16
2022–23 Fantasy Outlook
There was no outlook written for Chris Stroud in 2023. Check out the latest news below for more on his current fantasy value.
Handedness Right
Status Pro
Height 6'2"
Weight 180 lbs
DOB 2/3/1982
Birthplace Nederland, Texas
College Lamar
Country USA
Debut 1/1/2004
Read More News
PGA Stats
Loading Golf Stats...
Tournament Results
Scoring
FanDuel
DraftKings
Loading Tournament Log...
PGA Advanced Stats
Loading Advanced Stats...
Recent RotoWire Articles Featuring Chris Stroud See More
Weekly Recap: Finishing with a Flourish
72 days ago
72 days ago
One season wrapped up Sunday and a portion of another did as well, and two golfers -- including Jon Rahm -- went out on a high note.
Past Fantasy Outlooks
2020
2019
2017
2016
2015
2014
2013
2012
2011
2010
Stroud didn't do fantasy owners any help last season as he failed to record a top-10 finish and missed twice as many cuts as he made. It's the second time in the last three season that he's failed to qualify for the playoffs and he's on a downward trajectory that is likely to see him on the Korn Ferry Tour sooner rather than later.
Stroud has been on the PGA Tour for the better part of 13 season and he's cracked the top-50 on the FedEx list at the end of just one season. He'll generally make more cuts than he misses each season, although that wasn't the case last season, but his upside is extremely limited. Stroud has just five top-3s in 346 starts on the PGA Tour. He'll play a lot, probably make around $1 million this season, but don't expect a big bump in earnings.
As is often the case with guys that finish around $1 million in earnings, Stroud's season was made by one event. That event was a win at the Baracuda Championship in August. He did back up that win with a top-10 at the PGA Championship the following week, but there was really nothing to write home about outside those two weeks. Stroud has been a full time member on the PGA Tour for 11 years, but he's cracked the $1 million barrier just four times. His best season was 2014, when he earned more than $1.8 million. With a ceiling that low, there's no way to justify paying $1.3 million for him this season.
Stroud started 2015-16 strong with a T10 at the Frys.com (now Safeway) Open but it turned out to be his only top-10 of the year with only two other additional top-25s. He'll need to make the most of his limited opportunities on the big circuit and improve his driver, which left him 118th in strokes gained-off the tee.
It took Stroud some time to find some traction on the PGA Tour, four years to be exact, but since he earned his card in 2011, he hasn't looked back. The past two years have been especially productive as he's cracked the top-50 in the Fed Ex both years. It's certainly possible that Stroud has a big jump this season, but the track record would indicate that only a slight bump is in the works. As such, he's not a great option in salary cap formats. In draft leagues he's a solid 6th-rounder.
Stroud is an interesting case entering the 2014 season. He got off to a slow start in 2013, but hit a hot stretch a few months into the season where he picked up his only four top-10s of the season. He cooled off near the end of the season, but he came back better than ever during the 2013-2014 portion of the season. Stroud picked up two top-3s in four events last fall and that could be a sign of things to come.
Stroud got off to a nice start last season and good thing he did, otherwise he'd have been back at Q-School. Stroud started the year with top-15 finishes in two of his first three events. After a couple missed cuts, he rolled off consecutive top-10s. His final top-25 of the season came at the Crowne Plaza Invitational in May - and then the bottom dropped out. From the beginning of June through the end of the season, Stroud did not crack the top 30 at any event. That's certainly not the type of momentum you want entering a new season.
Stroud has had his moments over his brief three-year PGA Tour career, but none of those moments has resulted in a Top-3 finish. Even without the high-end finishes, though, he's managed to retain his card since his rookie season. He didn't leave much room for error in his first two seasons as he finished precariously close to the bubble each time, but last year was a different story as he finished well inside the Top 125. OK, so he finished well inside the number only after the last event of the season. Maybe he hasn't improved all that much. The three-year trend for Stroud is only slightly up and that's not likely to change much this season.
Stroud again found himself safely inside the top 125 at season's end last year, but this time around, he left himself a little breathing room. Stroud finished 2009 right on the cut line. Although he appears to be getting better, his progress has been slow to this point. His earnings have risen about $125K each year since 2007, but in this game, that's not enough. He might get another bump this season, but that won't be enough to make him a viable option for fantasy golfers. Stroud ranked 36th in GIR last season, but his other stats were lacking.
Stroud needs to work on his driving distance, driving accuracy and putting, but other than that, he's fine. One thing he did do well last season was greens in regulation. Hey, it’s a start. When you get this far down on the money list, there aren't many positives to point out.
More Fantasy News