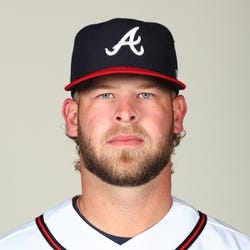 2022 Stats
W-L
5-4
ERA
2.06
WHIP
0.91
K
94
SV
5
2023 Projections
W-L
ERA
WHIP
K
SV
Unlock Our Projections
2023 Fantasy Outlook
Those who take a skills-based approach when speculating on saves late in drafts should look no further than Minter, who may now be one injury away from becoming Atlanta's closer. The southpaw posted his best strikeout (34.7%) and walk (5.5%) rates since his rookie-season sample in 2017 and was 7th among qualifed relievers with a 29.2% K-BB percentage. He pitched a career-high 70 innings and led the league with 35 holds while adding a handful of saves. Minter's 96.6 mph average fastball velocity tied a career high, while his cutter and changeup were also effective in generating whiffs and strikeouts. If the lefty maintains his newfound control, there may be even more opportunity for saves, even if he's not the Braves primary closer. Either way, Minter is a top-tier target for leagues that count holds. Read Past Outlooks
read more
RANKSFrom Preseason
#

* Exit Velocity, Barrels/BBE %, Balls Hit 95+ MPH %, and Spin Rate are benchmarked against 2019 data (min 30 IP). See here for more exit velocity/barrels stats plus an explanation of current limitations with that data set.
K/BB
6.27
K/9
12.1
BB/9
1.9
HR/9
0.6
Fastball
96.7 mph
ERA
2.06
WHIP
0.91
BABIP
.299
GB/FB
1.02
Left On Base
75.4%
Exit Velocity
81.9 mph
Barrels/BBE
5.4%
Spin Rate
2363 rpm
Balls Hit 95+ MPH
18.8%
Swinging Strike
16.5%
Prospect Rankings History
View Complete A.J. Minter Prospect Ranking History
Advanced Pitching Stats
Loading Advanced Pitching Stats...
Defensive Stats
Loading MLB Defensive Stats...
Stats Vs Today's Lineup
Want more matchup stats?
View A.J. Minter vs. Batter Stats
Loading Matchup Stats...
Braves Depth Chart
Our full team depth charts are reserved for RotoWire subscribers.
Subscribe Now
Recent RotoWire Articles Featuring A.J. Minter
The Z Files: OK, I'm SOLD
Yesterday
Yesterday
Todd Zola reconsiders his stance against adding holds as a roto category, and takes a look at the impact it would have on relievers like Devin Williams.
Closer Encounters: 2022 Saves in Review, Part 1
52 days ago
52 days ago
Ryan Rufe recaps this past season's saves landscape. Just how many teams preferred closer committees over the conventional approach?
The Z Files: NFBC Holdem Rankings and Strategies
54 days ago
54 days ago
Todd Zola shares his gameplan and his rankings for NFBC Postseason Holdem contests.
Past Fantasy Outlooks
2022
2021
2020
2019
2018
Minter has gone from a potential closer early in his career to someone now stuck toiling in middle relief in his current home. The lefty has plenty of velocity and has struck out 27.3% of the hitters he has faced in nearly 180 innings of major-league work while keeping the ball in the yard. An argument could be made for Minter to work higher-leverage innings for a lesser club. Atlanta already has high-leverage lefties in Will Smith and Tyler Matzek, so it's possible Minter is packaged up in something should Atlanta want to find a Freddie Freeman replacement on the open market once the lockout ends. This is an interesting case of taking the skills while seeing what role develops for Minter.
Minter earned 15 saves for Atlanta in 2018 and generated quite a bit of buzz before falling off in 2019. He lost the closer job in a hurry, spent time in the minors and ended that year on the IL with shoulder inflammation. The lefty uses a slider -- categorized sometimes as a cutter -- as his primary pitch and is comfortable using it in all counts. Meanwhile the four-seam fastball velocity held steady at 95.5 mph on average, so there are no obvious lingering effects of the shoulder issue that ended his 2019 season. He's allowed just one homer to lefty hitters in his career, and while less dominant against righties, he's held his own against opposite-handed pitching at the MLB level (3.58 FIP). Minter is not even the top southpaw in his bullpen -- that's Will Smith -- but the closer carousel is always going to turn and it's not hard to imagine Minter getting saves again at some point in 2021.
Many drafted Minter with the hope he would receive the bulk of the Braves' save chances in 2019, but all were disappointed by his efforts. Minter's season began with a sore shoulder which led to a velocity dip and control issues that sent him to Triple-A for a bit. The numbers in Gwinnett were more in line with what everyone hoped for -- he had a healthy 28.7 K-BB% and a sub-3.00 xFIP -- but it was too little too late. He only appeared in two games in September, the result of more shoulder trouble. Minter's draft-day value will depend in part on how the shoulder holds up to the offseason therapy, though with Will Smith joining Mark Melancon at the back end of the Atlanta bullpen, Minter is even further from the closer role. Hopefully he can avoid shoulder surgery. We have seen what he is capable of, and we have also seen how fragile things can be when Minter has something wrong with him.
Minter was a popular handcuff for Arodys Vizcaino last spring. The move proved prescient as Vizcaino was sidelined for a couple months and yielded closing duties to Minter. When Vizcaino returned in mid-September, they initially shared the role before Vizcaino took over the last week and into the playoffs. Minter finished the season with 15 saves and 12 holds. However, he was sluggish over the second half, registering a 3.79 ERA and 1.47 WHIP the final two months. Minter throws a 97-mph fastball and 92-mph slider, occasionally mixing in a change. He’s dominant enough for ninth-inning duties, but inconsistent control gets him into trouble occasionally. That's what happened the final two months of the season, likely putting Minter behind Vizcaino for the closing gig in the spring, Still, with Vizcaino’s own dalliance with control woes along with health issues, Minter will again be a top speculative saves dart.
Minter debuted with the Braves last season after cruising through the minor-league system with a big four-seam fastball, slider and cutter combo. He showed a few issues with walks at Double-A and Triple-A last season before his promotion, but he was sharp in Atlanta and his walk rate in 2016 was a non-issue across three levels. Rather quietly, Minter struck out 43.3 percent of the batters he faced, thanks to a gaudy 18.2 percent swinging-strike rate. It would hardly be surprising if Minter gets a chance to serve as the Braves' primary late-inning lefty, as he has the overpowering stuff necessary to help get the ball to Arodys Vizcaino in the ninth inning. In the event that Vizcaino falters or gets hurt, Minter is on the short list of interesting options who could take over the closer role, but he's on an even shorter list of Atlanta relievers capable of making an impact as a strikeout machine and ratios helper even if he's not providing saves.
More Fantasy News