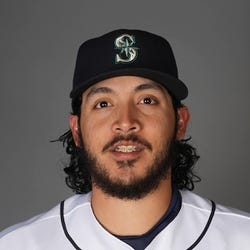 Out
Injury Foot
Est. Return 2/1/2023
2022 Stats
W-L
2-5
ERA
2.49
WHIP
0.89
K
96
SV
4
2023 Projections
W-L
ERA
WHIP
K
SV
Unlock Our Projections
2023 Fantasy Outlook
After signing a team-friendly, 4-year extension before the season, Munoz finally broke out in 2022, overcoming his biggest obstacle (health) to pitch a career-high 65 remarkable innings. The 24-year-old averaged 100.3 mph on his fastball and was in the 99th percentile or better in seven Statcast pitching metrics, including K%, whiff% and xERA/xWOBA. His 32.7% K-BB% was second-best among qualified relievers, while his 38.7% strikeout rate was fourth-best thanks to a slider that was among the best pitches in the league. Munoz limited baserunners (0.89 WHIP) to scale his way up Seattle's high leverage ladder, posting 22 holds while also getting a taste of closing with four saves. The Mariners have no financial reason to limit Munoz's save chances moving forward, so he could emerge as their primary closer in 2023. However, he must improve the effectiveness of his fastball (.338 BA, .500 SLG) and prove he's healthy after offseason foot surgery to take the next step. Read Past Outlooks
read more
RANKSFrom Preseason
#

* Exit Velocity, Barrels/BBE %, Balls Hit 95+ MPH %, and Spin Rate are benchmarked against 2019 data (min 30 IP). See here for more exit velocity/barrels stats plus an explanation of current limitations with that data set.
K/BB
6.40
K/9
13.3
BB/9
2.1
HR/9
0.7
Fastball
100.2 mph
ERA
2.49
WHIP
0.89
BABIP
.303
GB/FB
1.67
Left On Base
74.5%
Exit Velocity
78.7 mph
Barrels/BBE
1.6%
Spin Rate
2244 rpm
Balls Hit 95+ MPH
16.8%
Swinging Strike
21.8%
Prospect Rankings History
View Complete Andres Munoz Prospect Ranking History
Advanced Pitching Stats
Loading Advanced Pitching Stats...
Defensive Stats
Loading MLB Defensive Stats...
Stats Vs Today's Lineup
Want more matchup stats?
View Andres Munoz vs. Batter Stats
Loading Matchup Stats...
Mariners Depth Chart
Our full team depth charts are reserved for RotoWire subscribers.
Subscribe Now
Recent RotoWire Articles Featuring Andres Munoz
The Z Files: OK, I'm SOLD
Yesterday
Yesterday
Todd Zola reconsiders his stance against adding holds as a roto category, and takes a look at the impact it would have on relievers like Devin Williams.
2023 Fantasy Baseball Rankings - Way Too Early Top 300 Draft Ranks
44 days ago
44 days ago
James Anderson provides a way too early top 300 rankings for those who have the itch to start drafting for 2023.
Closer Encounters: 2022 Saves in Review, Part 2
46 days ago
46 days ago
Ryan Rufe recaps the saves landscape in this year's NFBC Main Event and shares his own hits and misses from this past season.
Closer Encounters: 2022 Saves in Review, Part 1
52 days ago
52 days ago
Ryan Rufe recaps this past season's saves landscape. Just how many teams preferred closer committees over the conventional approach?
MLB Playoff Picks: MLB Division Series Betting Preview
54 days ago
54 days ago
Erik Halterman gives his betting breakdown for the Divisional Series round of the MLB playoffs with odds and best bets from each matchup.
Past Fantasy Outlooks
2022
2021
2020
2019
Munoz, who missed the majority of the past two seasons after underdoing Tommy John surgery in March of 2020, walked two and struck out a batter over two-thirds of an inning during his lone appearance with the Mariners last year. The fact he was able to return was a surprise after he endured a setback in his recovery last March, but he was back on the mound in July and made substantial progress to return in October. The flamethrower didn't lose his velocity, as he topped 100-mph on his fastball during the outing, though his slider (82.2-mph) lost a few ticks on the radar gun and missed the plate on four of five pitches thrown. Munoz should be healthy entering 2022 and has upside worthy of a late-round flier for those speculating on saves. Just remember Seattle uses a closer committee and he may not get a ton of chances. Munoz is a riskier pick in draft-and-hold formats due to his limited innings potential.
Despite being shut down early in 2019 and slow played in the spring, Munoz experienced arm soreness, requiring Tommy John surgery in late March. The Padres dealt him to Seattle at the trade deadline. If there's a silver lining, it's the procedure was done early enough so Munoz should only miss a month or two this season. It remains to be seen if his 100-mph fastball loses any zip and if he's still willing and able to throw his sharp 86.5-mph slider 32% of the time. Munoz was on track to be a late-inning reliever with San Diego, and Seattle no doubt envisions him in a similar role. The Mariners are still rebuilding, so there's no reason to rush their 22-year-old prized arm back. Certainly in long-term leagues, Munoz is an intriguing stash. Don't assume it pays off in 2021 as a lot has to go right for him to collect second-half saves.
Munoz is blessed with a special arm. He averages 100 mph on his fastball -- yes, averages -- and his slider is a legitimate wipeout pitch. Munoz struck batters out at a 30.9% clip in his first foray into the majors while holding batters to a .186 average, and he allowed just one hit off his slider all season. Hitters chased his slider out of the strike zone more than half the time he threw it there (51.1 O-Swing%). When a pitcher sits at 100 with the fastball, the batter simply has to cheat to have any chance to hit it and that leaves them highly susceptible to the breaking ball. Munoz battled some walk issues after getting the call up after the break, but he had an above-average zone percentage which portends better control numbers. Still just 21, Munoz could use a bit more refinement, but this is a future closer profile if there ever was one. Expect him to open as one of the Padres' top setup men.
Munoz, the best relief-pitching prospect in baseball, can touch 103 mph with his fastball and may reach the big leagues this year as a 20-year-old. A dominant showing as the youngest player in the Arizona Fall League in 2017 served as his coming out party. Regularly touching triple digits as an 18-year-old can have consequences, and he was held back in extended spring training at the outset of 2018 with a tender elbow. After a PRP injection, Munoz was ready to make his season debut with short-season Tri-City in mid-June. He struck out nine in 5.2 hitless innings, leading to him getting promoted over Low-A and High-A to the Texas League, where he was the league's youngest player. His lower half is strong, but he is still adding good weight to his upper body. His mid-80s slider needs refinement, but he already commands an 80-grade fastball, so his secondary offering just needs to be OK for him to develop into one of the best closers in baseball.
More Fantasy News