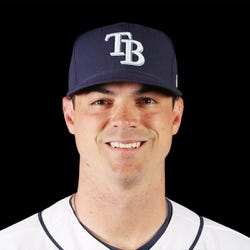 2022 Stats
W-L
1-2
ERA
2.68
WHIP
0.97
K
61
SV
6
2023 Projections
W-L
ERA
WHIP
K
SV
Unlock Our Projections
2023 Fantasy Outlook
Raley doesn't throw hard - he averages only 90.7 mph on his sinker - but continues to be one of the best in the league at limiting hard contact. The southpaw was one of Tampa Bay's most trusted relievers last season, tallying six saves and 22 holds while posting a 2.68 ERA, 0.97 WHIP and 61:15 K:BB over a career-high 53.2 innings (60 appearances). He threw more sliders, sinkers and changeups with great success, relying less on his cutter that hasn't been effective in recent seasons. The 34-year-old only allowed three home runs all season for a career-best 0.5 HR/9, but that rate may be due for some regression since he's posted a 1.1 HR/9 or higher in every other season. Raley was traded to the Mets in December, where he immediately slots in as the top lefty in front of Edwin Diaz. Read Past Outlooks
read more
RANKS
#599
ADP
League Majors
Bats L
Throws L
40 Man Yes
Height 6'3"
Weight 200
DOB 6/29/1988
Born San Antonio, TX
College Texas A&M
Drafted 6th Rd 2009 CHC
$Signed a two-year, $8.75 million contract with the Rays in November of 2021. Traded to the Mets in December of 2022. Contract includes $6.5 million team option ($1.25 million buyout) for 2024.

* Exit Velocity, Barrels/BBE %, Balls Hit 95+ MPH %, and Spin Rate are benchmarked against 2019 data (min 30 IP). See here for more exit velocity/barrels stats plus an explanation of current limitations with that data set.
K/BB
4.07
K/9
10.2
BB/9
2.5
HR/9
0.5
Fastball
90.7 mph
ERA
2.68
WHIP
0.97
BABIP
.273
GB/FB
1.18
Left On Base
69.0%
Exit Velocity
80.5 mph
Barrels/BBE
1.1%
Spin Rate
2534 rpm
Balls Hit 95+ MPH
21.1%
Swinging Strike
12.1%
Advanced Pitching Stats
Loading Advanced Pitching Stats...
Defensive Stats
Loading MLB Defensive Stats...
Stats Vs Today's Lineup
Want more matchup stats?
View Brooks Raley vs. Batter Stats
Loading Matchup Stats...
Mets Depth Chart
Our full team depth charts are reserved for RotoWire subscribers.
Subscribe Now
Recent RotoWire Articles Featuring Brooks Raley See More
Todd's Takes: Reviewing More of the Moves and ADP
56 days ago
56 days ago
Todd Zola breaks down the latest offseason transactions, ranging from big moves like Aaron Judge's return to the Bronx to small moves feature interesting relievers and part-timers.
The Z Files: OK, I'm SOLD
68 days ago
68 days ago
Todd Zola reconsiders his stance against adding holds as a roto category, and takes a look at the impact it would have on relievers like Devin Williams.
Closer Encounters: 2022 Saves in Review, Part 1
119 days ago
119 days ago
Ryan Rufe recaps this past season's saves landscape. Just how many teams preferred closer committees over the conventional approach?
NFBC Main Event: Season in Review & Lessons Learned
123 days ago
123 days ago
Ryan Rufe looks back on both his successes and his struggles in his first season in the NFBC Main Event.
NFBC Main Event: Fever Dream, Chapter 5
125 days ago
125 days ago
Ryan Rufe walks us through the final few weeks of his first foray into the NFBC Main Event.
Past Fantasy Outlooks
2022
2021
2014
2013
Raley has had a winding career path, as he struggled mightily in an initial stint in the majors, which came all the way back in 2012. In an increasingly familiar story, he signed in the KBO and resurrected his career across five seasons with the Lotte Giants. Now entering his third season of his second stint in the majors, Raley joined the Rays in the offseason and figures to serve a meaningful role in the team's bullpen. That possibility became even greater after Nick Anderson and Pete Fairbanks - both high-leverage arms - were placed on the 60-day injured list on Opening Day. Originally a starter, Raley's stuff has played up out of the bullpen since his return to the league, as he's posted a strikeout rate above 30 percent - and that mark spiked to 37 percent in 2021 - in each of the last three seasons. Home runs are the primary remaining blemish on his profile, as he's surrendered nine home runs in only 69 innings of work (1.2 HR/9) across his last two seasons. If he can keep the ball in the yard effectively, he could factor into the saves picture in Tampa Bay, though he'd likely fall behind at least Andrew Kittredge in terms of securing a high-leverage role.
Raley first reached the majors in 2012 with the Cubs, got injured the following year, was back in the minors the following season and then was in Korea from 2015-2019 working as a starting pitcher with a fair amount of success in the KBO. He came back to the majors in 2020, initially as a reliever for Cincinnati before being traded to Houston at the trade deadline. As a former starter, Raley can throw five different pitches, making him a bit unusual for a middle-relief lefty as his repertoire is not exactly situational. He certainly does not throw hard (around 90 mph on average), but throws a high-spin-rate fastball and curveballs and in the small sample size of 2020, did an outstanding job suppressing contact. In fact, his average exit velocity was in the 99th percentile. His fantasy value will come mostly in the form of vultured wins in the middle innings.
Raley spent most of the year as a mediocre starter for Triple-A Iowa, but all nine of his appearances for the Cubs saw him as a long reliever. While he has above-average control, Raley is too hittable to achieve sustained success at the high levels. He'll likely spend most of the year with Iowa again.
Raley made five starts for the Cubs last year and got shelled (8.14 ERA, 16:11 K:BB in 24.1 innings). His work at Double-A was passable before that, but at Triple-A not so much. He's left-handed, but throws his fastball in the high-80s, and at 24 he probably doesn't have a high major league ceiling assuming he even gets back there in 2013. Most likely, Raley will serve as organizational depth while trying to figure out hitters at Iowa again.
More Fantasy News