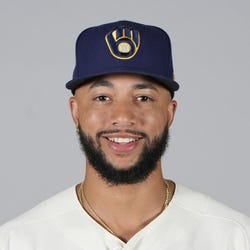 2022 Stats
W-L
6-4
ERA
1.93
WHIP
1.01
K
96
SV
15
2023 Projections
W-L
ERA
WHIP
K
SV
Unlock Our Projections
2023 Fantasy Outlook
Williams made his first All Star team in 2022 after an impressive first half as Milwaukee's setup man. Once Josh Hader was traded, many assumed Williams would become the Brewers primary closer, but the team used him as part of a committee for a bit before finally turning things over during the final month. Williams finished with a career high 15 saves, including seven of Milwaukee's last nine. Momentum is certainly on his side as we forecast closers for 2023, especially since his Statcast metrics were off the charts. Williams was 99th percentile or better across nine diffferent metrics, including strikeout rate and hard hit rate. The one area that continues to be a problem is walks, but that's bound to happen when you have insane movement on your changeup - a pitch so filthy that it has its own nickname. While the "Airbender" gets the attention, Williams really improved the effectiveness of his 4-seamer (.090 BAA), which supplemented the change as a secondary strikeout pitch. Read Past Outlooks
read more
RANKSFrom Preseason
#