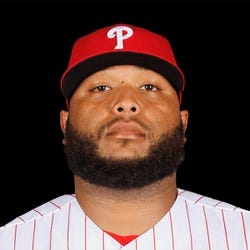 * Exit Velocity, Barrels/BBE %, Balls Hit 95+ MPH %, and Spin Rate are benchmarked against 2019 data (min 30 IP). See here for more exit velocity/barrels stats plus an explanation of current limitations with that data set.
K/BB
3.38
K/9
14.3
BB/9
4.2
HR/9
0.4
Fastball
99.6 mph
ERA
3.18
WHIP
1.22
BABIP
.364
GB/FB
2.90
Left On Base
69.3%
Exit Velocity
79.8 mph
Barrels/BBE
4.3%
Spin Rate
2128 rpm
Balls Hit 95+ MPH
19.0%
Swinging Strike
17.0%
Advanced Pitching Stats
Loading Advanced Pitching Stats...
Defensive Stats
Loading MLB Defensive Stats...
Stats Vs Today's Lineup
Want more matchup stats?
View Jose Alvarado vs. Batter Stats
Loading Matchup Stats...
Phillies Depth Chart
Our full team depth charts are reserved for RotoWire subscribers.
Subscribe Now
Recent RotoWire Articles Featuring Jose Alvarado
The Z Files: OK, I'm SOLD
3 days ago
3 days ago
Todd Zola reconsiders his stance against adding holds as a roto category, and takes a look at the impact it would have on relievers like Devin Williams.
World Series Betting Preview: Phillies vs. Astros Picks and Predictions
40 days ago
40 days ago
Erik Halterman gives his betting preview for the 2022 World Series with the latest odds along with his best bets and props to target for the Fall Classic.
The Z Files: NFBC Holdem Rankings and Strategies
56 days ago
56 days ago
Todd Zola shares his gameplan and his rankings for NFBC Postseason Holdem contests.
MLB: Postseason Cheat Sheet and Strategy
60 days ago
60 days ago
Todd Zola tackles the MLB Postseason Cheat Sheet for RotoWire and discusses his approach to postseason leagues this year.
MLB: One Man's Trash... (Week 25)
63 days ago
63 days ago
Jeff Zimmerman analyzes a handful of players who have been dropped frequently, with an eye towards figuring out how interesting they'll be next season.
Past Fantasy Outlooks
2021
2020
2019
2018
There were times in 2018 when Alvarado looked like the next big thing out of the Tampa Bay bullpen. He touched 100 mph with a two-seamer that seemingly defied the laws of physics at times coupled with a slider that came in around the speed of the league-average fastball. That feels like a decade ago, as Alvarado has rarely been right since due to injuries, inconsistency and family issues. He still throws hard but has permitted 71 baserunners and uncorked 11 wild pitches in 39 innings over the past two seasons. He was a healthy scratch from the postseason roster because his command simply could not be trusted in high-leverage situations. The career 27.9 K% and .207 BAA make him tempting to chase, especially now that he's in Philadelphia where there's less competition for saves, but his command of the strike zone has been AWOL since the end of the 2018 season. If he finds "it" again, he could dominate.
Alvarado opened the season sharing closing duties with Diego Castillo. He was effective early, posting a 1.04 ERA and 0.92 WHIP, fanning 26 in 17.1 innings, with five holds and a perfect 4-for-4 saves mark. Things then unraveled for Alvarado, as he allowed seven earned runs over his next seven frames, walking eight while surrendering 11 hits. Alvarado then left the country to attend to a personal matter in Venezuela, returning to the club in late June. His season was interrupted twice more, the first with a sore oblique followed by elbow inflammation prematurely ending his season in August. After his dominant start to the season, Alvarado never regained form. With a revamped bullpen featuring Emilio Pagan and Nick Anderson, Alvarado will first need to show he's healthy, then pitch well enough to return to late-inning duties.
Closers need a couple things: two quality pitches (or one amazing one) and command. Alvarado has two excellent pitches in a fastball that tickles triple digits and a hard, 11-5 breaking ball that batters have a tough time picking up out of his hand. Early in 2018, he lacked the command portion of that equation and had a 14% K-BB rate despite his stuff because he could not hit his spots consistently. That changed midseason and Alvarado had a 28 K-BB% in the second half while holding hitters to a .154 batting average and a .244 slugging percentage. He allowed one home run on the season to the 263 batters he faced, which while fortunate, also speaks to how tough he is for batters to pick up. A few year ago, the club had Felipe Vazquez on the roster and traded him to get Jose Lobaton. They have Vazquez 2.0 here and will not repeat that mistake. As long as the Rays do not try to game the arbitration system, this is their new closer.
Alvarado's fastball-slider combo had enticed during his rise through the farm system, but he hadn't shown an ability to locate with consistency prior to 2017. The lefty issued walks at a 6.4 BB/9 clip in a 16-game stint at Triple-A and hadn't posted a mark under 4.0 at any level. All of a sudden, Alvarado began hitting his spots and ended up with an above-average walk rate (2.7 BB/9) in his first exposure to big-league hitters. The swing-and-miss came with him to the majors, with Alvarado averaging close to a strikeout per inning, and he induced groundballs 53.7 percent of the time. His FIP was more than a run lower than his ERA at 2.55 -- that was good for 18th among 291 relievers with at least 20 innings. Alvarado was excellent against righties (.193 wOBA), and if Alex Colome is dealt this winter, Alvarado could get a look in the ninth.
More Fantasy News